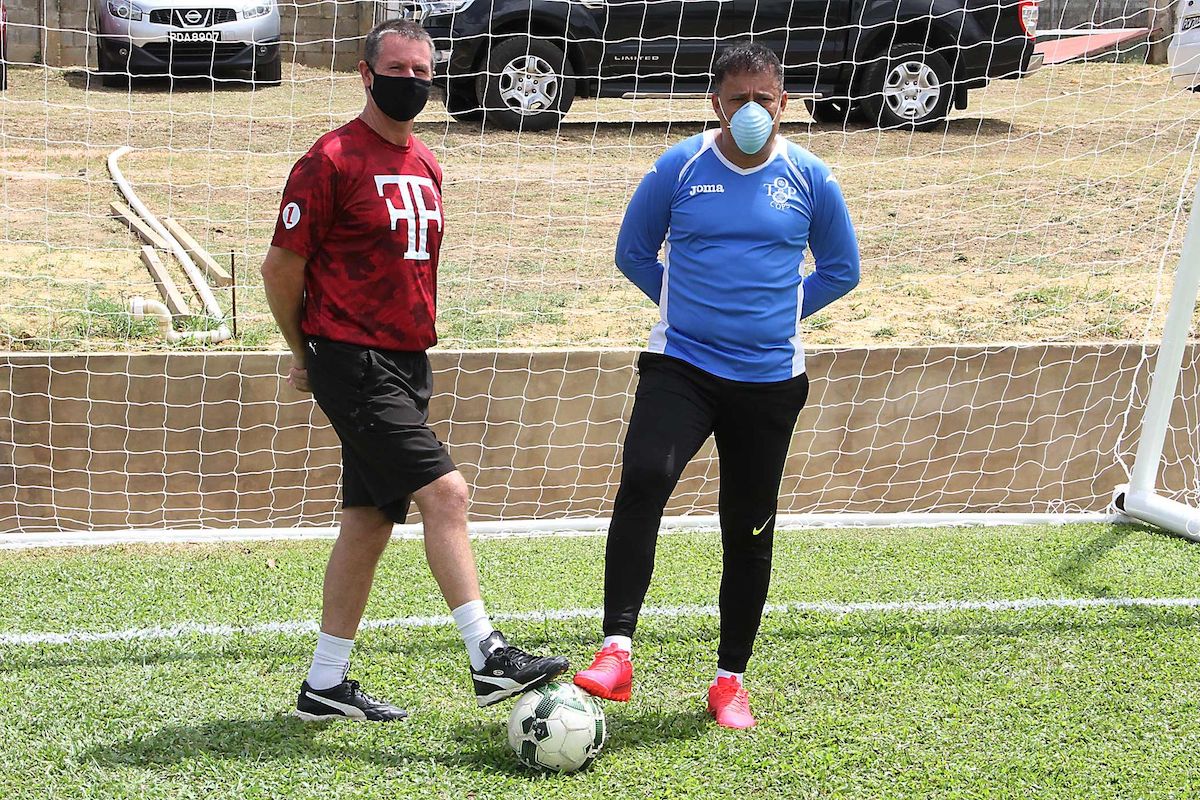 Part 1 of an investigation into football scholarships in Trinidad and Tobago.

Fired T&T national football coach Terry Fenwick is at the centre of a tangled web of requests for funding for football scholarships through Irish company Bad Wolf Sports into which Police Commissioner Gary Griffith, an English private school and the Lancashire police have become entangled.

A months-long Sunday Express investigation has revealed that Bad Wolf Sports, which names Fenwick as its technical director, misrepresented international contracts and partnerships it claimed to have obtained over time to bolster its chances in securing scholarship money from the Trinidad and Tobago Police Service (TTPS) for young T&T nationals.

The proposed partnership saw the TTPS Sports Club authorising a wire transfer of £20,000 to Bad Wolf Sports on May 11, 2021 and then withdrawing it.

General Secretary of the Sports Club, Insp Joshua Pierre, and Trustee Anson Springer were signatories to the transfer which requested, “the full amount as well as related charges should be deducted from our Interdepartmental Account #23***** which is held at this Branch (One Woodbrook Place), Woodbrook”.

Documents seen by the Sunday Express state the funds were to create and deliver on-island B-TEC Sporting Scholarship Programmes (Levels 2 and 3) for identified and qualifying scholars across Trinidad and Tobago”.

In correspondence seen by the Sunday Express, Bad Wolf Sports claimed it had entered into a partnership with UK-based private school Moorland for the programme.

When the cash was wired from the TTPS Sports Club account, no structure was in place for the scholarship programme since talks between Moorland and Bad Wolf had been placed on the back burner.

The funds were deposited into the TTPS Sports Club account at First Citizens Bank, One Woodbrook Place, by donors affiliated with the 2019 Commissioners Cup tournament.

By letter dated June 1, 2021, Pierre wrote the manager of First Citizens, One Woodbrook Place, instructing that a “Stop Order with Immediate Effect” be placed on the wired funds. The bank acknowledged receipt of the request on June 2, 2021.

A search conducted by the Sunday Express via the United Kingdom Company Registry revealed that Bad Wolf Sports Ltd (company number 679163) was set up on Thursday October 8, 2020. Its current partial address is Kildare, Ireland.

Miller is a former marketing director at the T&T Football Association (TTFA) and previously held the position of chief executive officer at the now defunct Football Company of T&T (FCTT).

By e-mail dated February 7, 2021, Miller (peter.miller@badwolfsports.ie) wrote to Fenwick (terryfenwick@hotmail.co.uk) under the subject line, “Requested Information for Gary Griffith re Moorland School and Football Factory Foundation).” In the email, Miller refers to the scholarship programme and partnership between Moorland and the Football Factory Foundation (FFF) as “ground-breaking”.

FFF, a charitable sports organisation operated by Fenwick, had teamed up with the TTPS in 2019 to host the Commissioner’s Cup. (An invoice for that programme was sent to the TTPS by the FFF for $995,000).

In the February 7 email, Miller stated that Griffith had been invited to be the programme’s ambassador alongside football great Yaya Touré.

Ivory Coast-born Touré is a retired professional footballer and was voted African Footballer of the Year 2011, 2012, 2013 and 2014. He has played for Manchester City and Barcelona.

Miller wrote, “to complement the programme a mirror ‘Shoot Goals Not Guns’ community outreach programme will be facilitated in Lancashire working with Lancashire Police Force. Gary Griffith has been invited to be the programme Ambassador along with Yaya Toure as its Ambassador.”

He stated that Griffith would be required to liaise with the Lancashire Police Force, “with a view to reciprocal initiatives linked to the programme. It is hoped/proposed that this initiative be replicated throughout the Caribbean Region over the next five years.”

Further, Miller stated the partnership with Moorland required an annual residential fee of £34,000. The first year was to consist of a virtual academy conducted by FFF to the tune of £10,000 where students would be exposed to “vital learning plus actual coaching”, according to Miller.

The first group of students was to begin in a programme in May 2021, and as such all annual fees needed to be paid in advance, Miller wrote.

Miller said to facilitate this “ground-breaking initiative” a minimum of ten students were required which cost $1 million. A second group of ten students was planned for a July/August, 2021 intake.

That same e-mail was forwarded on February 10, 2021 by Miller to another e-mail address used by Fenwick via email address twf@me.com, in which Deakin was copied.

Further, Deakin wrote that Bad Wolf was awaiting payment of $800,000 (to be made in two equal payments of $400,000) to secure up to five scholarship spaces.

“This payment will include 12 months scholarship education for all scholars, including delivery of practical ‘coaching’ elements, all associated cost and fees in negotiating, identifying and registering of scholars, all fees associated with establishing the programme, all fees in relation to on-going liaison with Moorland Private School, on island management of the programme and ongoing assessment of individual scholars, required in order to achieve educational and practical standards of the qualification,” Deakin wrote.

Moorland: We never dealt with TTPS

On April 13, 2021 Moorland Private School Head Teacher and proprietor Jonathan Harrison wrote Griffith via e-mail indicating his school was working in partnership with “Bad Wolf Sports of Dublin, Republic of Ireland in the identification, negotiation, registration and delivery of BTEC Sporting Scholarships”.

On June 16, 2021, the Sunday Express contacted Moorland Private School seeking a comment from Harrison on the letter. We were informed he was on leave. When told what the query was about, a senior administrator of the school indicated she was familiar with Bad Wolf Sports since the company had partnered with the school.

Bad Wolf had reached out to the school earlier this year stating they wanted a football partnership, the representative said.

Moorland thought nothing was untoward since sporting clubs and agencies worldwide have partnered with them in the past.

“They (Bad Wolf) approached us. The police service (TTPS) have not come into this at all, as far as we are concerned. This is the first time we are hearing about them (TTPS). Our correspondences have always been with Mr Deakin and Mr Miller where they expressed interest in the B-TEC programme,” she said.

She however said nothing was cemented and everything was still at the planning stage.

The administrator also said talks between Bad Wolf and the school had been “placed on the back-burner” since the company has been missing scheduled meetings and constantly changing dates.

On June 1, 2021 the Sunday Express spoke via telephone with press officer Gareth Vickers of the media relations department of the Lancashire Police Force.

Commenting on Miller’s correspondence to Fenwick, the press officer said, “We have no knowledge of it (programme). I am afraid we have no knowledge of where this is coming from. I have asked a couple of colleagues and they have all come back without any further information, so we are a bit in the dark about this.”

Vickers said with any such initiative/project involving the police force, “there is a likelihood we would have been told about it and no one has any knowledge of it whatsoever. I would certainly know if we were working alongside a sovereign police commissioner or a sovereign police force, I am just a bit suspicious.. it does not sound quite official”.