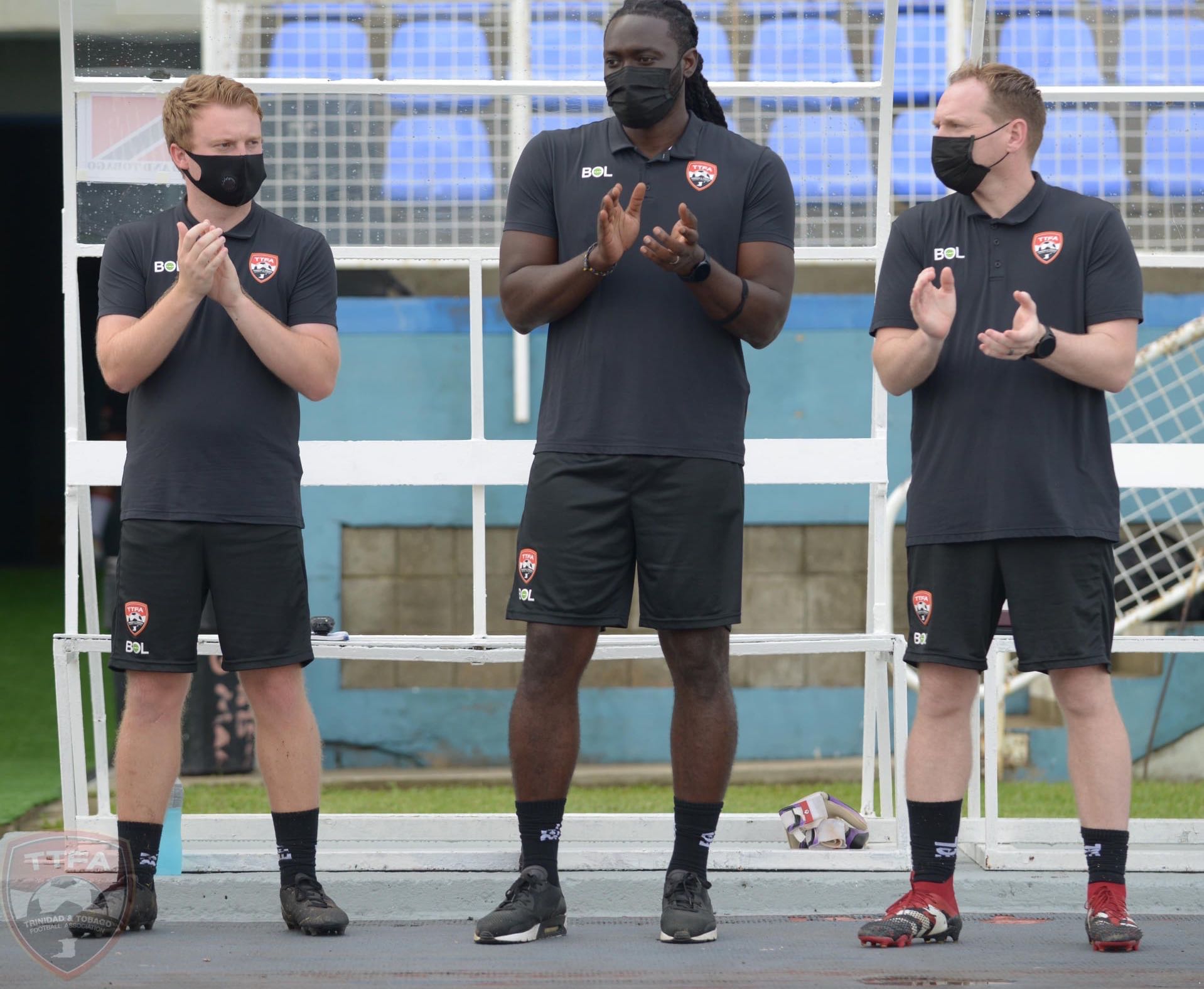 T&T’s struggles in football continued in 2021 in a similar fashion as it did the year before, both on and off the field.

Coach Terry Fenwick was appointed in December 2019 on a two-year contract that commenced on 1 January 2020 by the William Wallace-led administration, finally got down to business in the World Cup Qualifiers, but the battle with the COVID-19 pandemic also affected the team’s preparation, as it prevented the free movement of international players to and from training, prevented the scouting of new players from taking place and it drove a wedge into the action at the top-flights T&T Pro League and Super League with no on-field action.

His first test came at an international friendly match with the USA at the Exploria Stadium in Orlando, USA on January 31, where Fenwick’s team, dominated by players from the rungs of the lower Leagues in the USA, was hammered 7-0. Fenwick’s selection and decision to take the match became topics of contention among local coaches but it did not provide any ease at the World Cup Qualifiers that followed in March.

With the T&T government failing to provide the facilities of a secure bubble for the opening match between T&T and Guyana which was expected to be a home match for T&T, the Normalisation Committee led by Robert Hadad, the chairman had to settle for the Dominican Republic as the venue for the team’s first game and it paid off with Fenwick’s men whipping Guyana 3-0.

However, misfortunes followed the team in the other matches, as the Soca Warriors drew with Puerto Rico 1-1, tied goalless with the Bahamas before sealing a 2-0 win over St Kitts & Nevis for a total of eight points, needing to have at least nine to advance from Group F.

It meant that St Kitts & Nevis had advanced to the next round of the qualifiers as T&T was booted out.

Hadad and his committee of Judy Daniel, Nicholas Gomez and Nigel Romano responded by sacking Fenwick on June 11, and severing the deals of his assistants Derek King and Kelvin Jack soon after and hired Angus Eve three days later on a performance-based contract ahead of the Gold Cup Qualifiers with Montserrat and French Guiana on July 2 and 6 respectively.

Eve, a former national midfielder and standout performer, opting for a new-look team, whipped Montserrat 6-1 and blanked French Guiana 8-7 in a penalty shoot-out which followed a 1-1 tied in regulation time, thereby assuring T&T qualification to the Group Phase of the Concacaf Gold Cup in the USA.

More success followed Eve, a former InterCol winning coach, thereafter with a goalless tie with Concacaf giants Mexico in Group A at the AT&T Stadium, before a 0-2 loss to El Salvador spoiled T&T’s plan of emerging from the group. The Warriors completed the group by drawing with Guatemala 1-1 in Frisco, Texas, USA.

With two points from three games and a display of football that was reminiscent of the football that the T&T team was capable of playing, Eve had earned himself the full-time coaching job when the TTFA appointed him on September 2 as T&T’s senior men and Under-20 national team coach.

The same could not be said for the country’s women’s team, which was thought to have had a steady coach in Welshman James Thomas since his appointment on April 29, amid speculation that former national women’s coach Richard Hood was the front-runner the position.

Thomas and his assistant Charlie Mitchell prepared the team until Thomas agreed to pick up another job in the UK and quit the T&T national programme in September, roughly a month before the team was scheduled to begin World Cup qualifiers in November.

That development again began speculation of a local coach assuming the top women’s coaching job but instead, the normalisation committee opted for American Constantine Konstin, a futsal coach who had never before coached officially at 11-a-side football.

As faith would have it, Konstin’s stay lasted just two appearances at the training sessions which forced the Normalisation Committee to engage the services of former senior men’s captain Kenwyne Jones, who had no head coaching experience to lead the team. He was the team’s third coach in six months. The unofficial report that reached Guardian Media Sports is that Konstin was replaced due to an apparent disagreement by some players and staff members to have the American as their coach because of his lack of experience of coach 11-a-side football.

In the meantime, Concacaf sought to push back the women’s qualifiers to February 2022 and Jones who had brought a level of calm to the women’s programme and the unit, produced two satisfactory displays in as many international friendly matches against Panama for a team that hadn’t played together for two years.

The T&T women, led by captain Karyn Forbes drew with the Panamanians 0-0 and 1-1 both at the Ato Boldon Stadium in Balmain, Couva in October. Jones, given an interim coaching job until November 30 this year, lobbied for the full-time coaching position saying he believed the women had what it takes to qualify for the World Cup.

This ask was answered by the normalisation committee on the eve of the second of two friendlies in Santo Domingo on November 30,

NC via a media release that said: “The appointment was “based on the achievement of KPIs (key performance indices) and a successful performance appraisal. Jones created a “positive atmosphere” within the team and improved the “dynamic between the players and the technical staff.”

Three days before the appointment Jones’ charges were defeated 2-1 by the Dominican Republic courtesy of an injury-time goal. And in the second match, the T&T women held their counterparts to a 1-1 tie.

Insolvency and a debt of an estimated TT$98.5M.

Meanwhile, off the playing field, things were not so good either. The membership of the T&T Football Association clamoured for the removal of the Hadad-led committee, sighting its inability to achieve the mandate laid out by FIFA in March 2020.

In May, a letter penned by the membership accused the Normalisation Committee of gross mismanagement saying they disapproved of the way the sport was being managed, such as the non-payment of salaries to the staff, players and coaches of the senior national men’s team which is well into the FIFA World Cup Qualifiers for the Qatar World Cup 2022; no audited and compliance committee, no annual general meetings (AGM), no audited financial statements for the year ended December 31, 2020; increasing debt and poor financial management, and the mismanagement of the World Cup match against Guyana that was played in the Dominican Republic.

The mandate of the normalisation committee has been: to run the TTFA’S daily affairs; to establish a debt repayment plan that is implementable by the TTFA; to organise and to conduct elections of a new TTFA Executive Committee for a four-year mandate.

However, Hadad told the media on May 1 that the official T&TFA debt was $98.5 million and revealed that Ernest and Young (EY) would help with a debt-eradication programme. It also set September 26 for the first AGM of the NC since its appointment.

But tempers flared as matters remained unresolved after the meeting, including the approval of Audited Financials for 2019, the expulsion of the Coaches Association which was to be replaced by the Unified Coaches of T&T, and why the value of the land housing the Home of Football and valued at $42 million, was not included in the association’s financial statement.

This was later settled at an Extraordinary General Meeting (EGM) on October 10 at which the audited accounts were approved to facilitate grant payment by the FIFA. But there was still no way of reducing or clearing the debt that burdened the TTFA and football in general in T&T for over a decade.

Hadad in an interview told Guardian Media Sports said the dissolution of the TTFA was an option but they were not considering it at the time. Since however, the local football administrator has been liaising with the government for help to liquidate the debt.

However, on Christmas ever, the TTFA issued a News release to the media in which FIFA in a letter dated December 21, had granted the normalisation committee a one-year extension on its term to March 31, 2023.

The term of the Normalisation Committee was set to end on March 26, 2022, but a release from FIFA said owing to an array of legal drawbacks stemming from the TTFA board of directors disagreement with the committee’s appointment in 2020, partnered with pandemic challenges, FIFA opted to extend the committee’s reign for an additional year to assist them in achieving their core objectives.