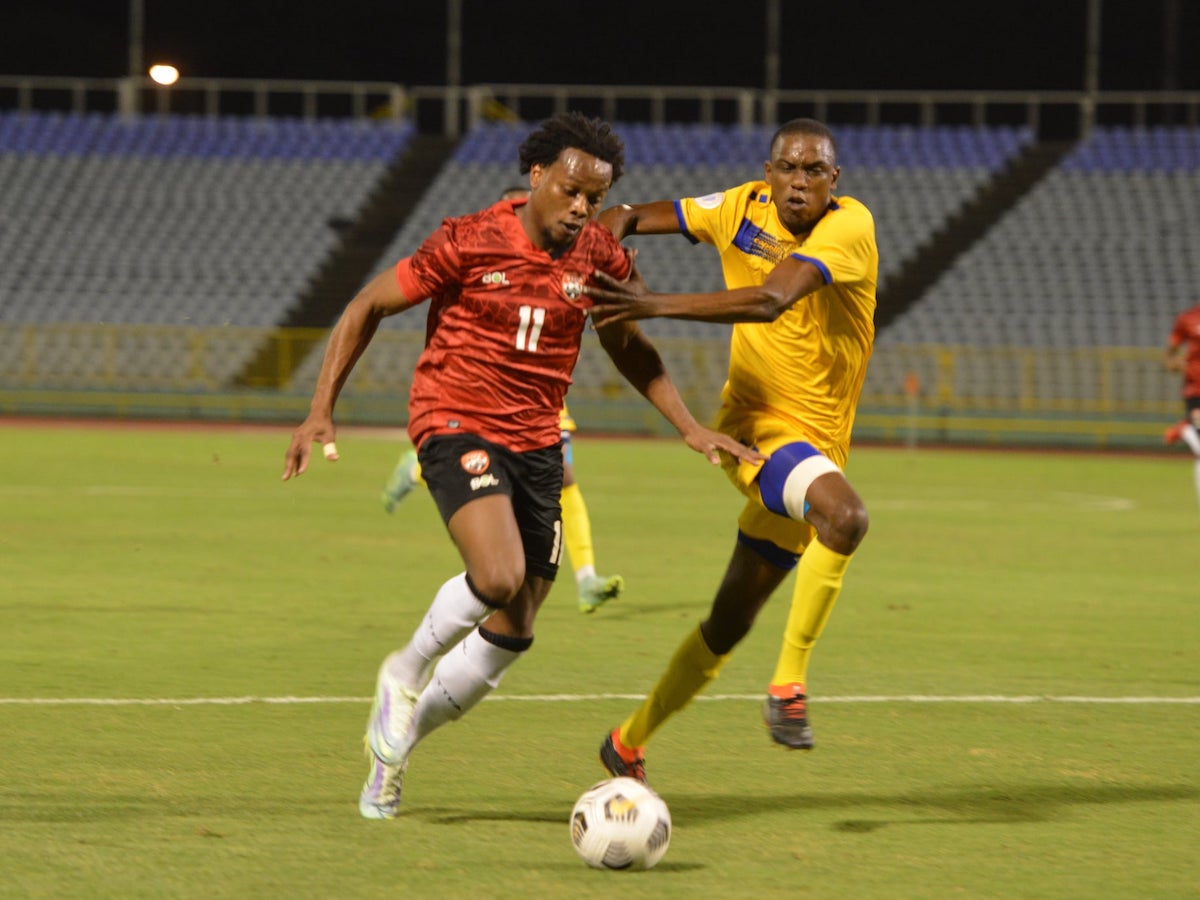 The team will hope for a repeat performance on Tuesday night when they face Guyana from 7 p.m. at the HCS. All three teams are using the series as preparation for Group B CONCACAF Nations League action in mid-year.

Garcia (27’, 35’ & 40’), Ryan Telfer (29’ & 59’) and Nicholas Dillon (68’ & 77’), Reon Moore (79’) and Jean Paul Rochford (82’) all put in goals, on a night when head-coach Angus Eve was predictably pleased with the team’s enterprising football going forward, but probably still somewhat concerned with a few errant passes and unpunished lapses in midfield and defence.

“If we play to our true potential, we could compete with anyone in the CONCACAF zone,” said Eve. “We just need a little bit more work and a little bit more experience playing together. If we could get that, we will grow from strength to strength. When you get a team to kill, you kill them off. We showed our professionalism,” added Eve. “We could have dropped (our level of play).”

T&T were three goals ahead after just about half-an-hour, having also missed quite a few before the opening goal. Barbados goalkeeper Liam Brathwaite was called into early action, twice defending his goal with point blank saves both Levi Garcia and Telfer in the opening five minutes, while Andre Fortune also volleyed over from close-up soon over.

Barbados team manager Kent Hall acknowledged that his team needed to do more work and suffered against good forward transition and the physicality of the T&T footballers. “I think the boys would learn from it,” said Hall. “We have got to take it on the chin.”

Barbados did not have a look at the T&T goal until the 21st minute when T&T captain and goalkeeper Marvin Phillip was at full flight to keep out Mario Williams’ free-kick as it headed to the far corner. Phillip had made two other telling interventions before the first half ended.

Playing direct, route-one football, Barbados had a decent spell midway through the first half, but never the talent resources to exploit the moments when T&T looked less intent and assured.

It was one of those positive moments, when Barbados looked about to score the opening goal, when T&T struck from a quick counter-attack at the other end. Phillip quickly gathered the ball and punted down field to Garcia, who netted from an acute angle after going around the Bajan keeper.

Telfer powerfully put in the second two minutes later after a Fortune square ball, and Telfer’s fancy footwork and through-ball earned Garcia a simple tap past the keeper for his second goal. A powerful downward header gave Garcia his hat-trick and both Fortune and Telfer had further chances to score before the half ended.

“We saw a lot of good things to build on. We have seen the experience of playing abroad. Just a cut above the others,” stated T&T technical director Anton Corneal. “It could have been more goals.”

Coached by Trinidadian Russell Latapy, who did not travel with the team, Barbados looked the more eager to score early in the second half and would have except for central defender Kareem Moses sliding in to keep Hadan Holligan’s shot out of the goal.

Cutting inside, Telfer put a bullet off the crossbar for 5-0 and Dillon was on the field for about two minutes when he had a free look at the Barbados goal and scored for 6-0, before flicking the ball in from close-up for his second goal. Moore’s slashing run into the penalty area yielded an eighth goal.

Former youth team captain Rochford probably left the best for last when cutting in from wide and putting the ball into the roof of the net. The 4,000-5,000 fans who paid to see football left reasonably satisfied and gave the team a standing ovation at the end.