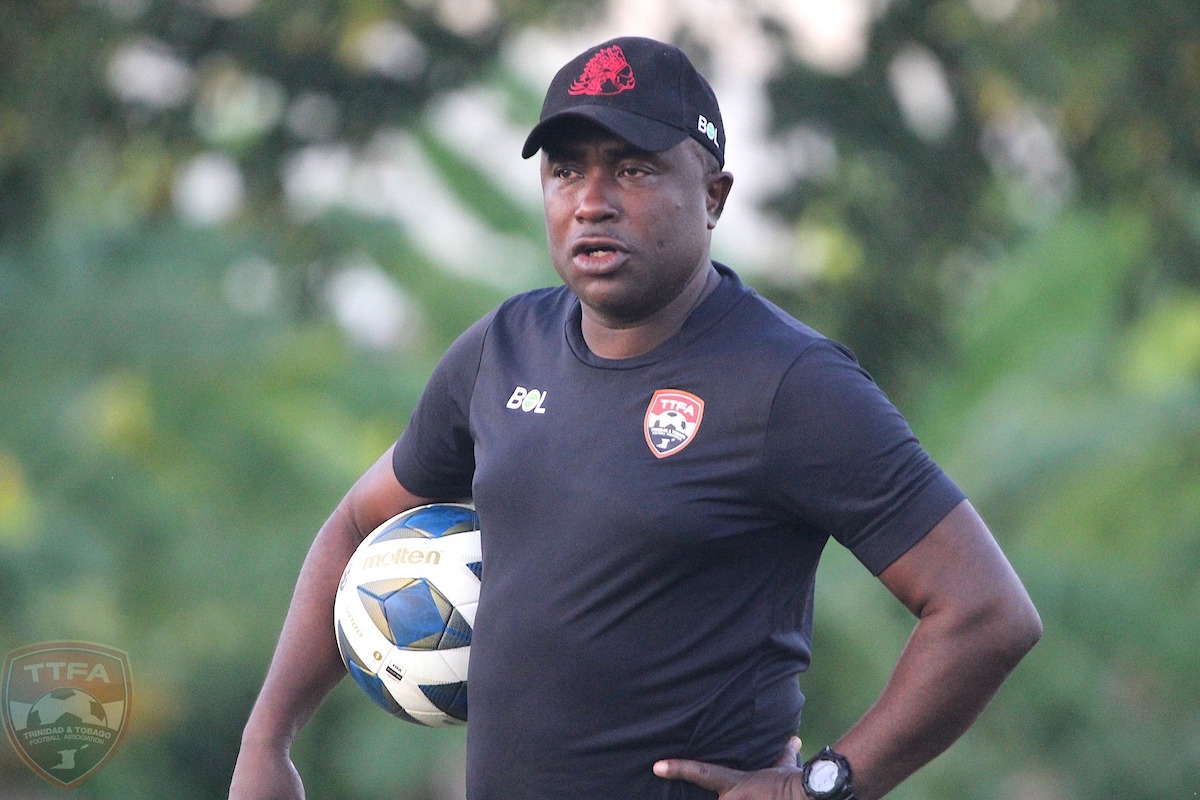 As Trinidad and Tobago’s football closes the curtain on the 2022 calendar and looks ahead to what promises to be an eventful 2023, the man in the top job, head coach of the Men’s National Senior Team Angus Eve believes that with the right planning and application, the period ahead can bring the much needed relief and inspiration the country is longing for.

“Well obviously 2022 was really up and down for us from Trinidad and Tobago standpoint. We didn’t start off well in the Nations League, our only form competitive football for the year, for all sorts of different reasons but we did settle down and I thought we played good football at times. We never had the full team at any one time but I can definitely see slow progression but we didn’t have a consistent run of games which affected us,” Eve told TTFA Media on Old Year’s Eve.

How would you sum up the year that was 2022 for our men's teams?

“We were very intermittent and far and few in between. I was also the coach of the Under 20s. I know a lot of people on the ground would think it was not a successful campaign but I do think it was successful from the point of view when you look at the team and our lack of experience. Under 20 football is the first step of senior team football with players signing all over the world at ages 16 and 17 for huge money. Coming out of the group stage was a success for us and then we met Costa Rica which had players already in the senior team set up and played in the World Cup campaign.

“If you look at the Colleges league you would have seen players who we took with us who excelled in the league with players like Tristan Edwards, Christian Bailey Tyrik Lee, Lindell Sween and Jaheim Faustin who didn’t actually make the final team but was part of the process.

We have a number of young players coming through. Everything in life is about process. We were able to expose a lot of young players, Ajani Fortune, Molik Khan, Keston Julien, Shannon Gomez and even Levi Garcia.. players who have not played a lot of the national team but seeing them coming in, using them in different process and buying into the philosophy and wanting to part of the effort as a team and as a country. That’s positive for me to see the response of the players. Looking at the Courts Caribbean Classic, it gave us a glimpse of what we can be again from a playing standpoint and as fans. Those were positive areas we can build on.”

What has the World Cup taught us of the approach we need to adopt...the direction we need to take as a nation serious about making headway in world football?

“The World Cup has shown me from a tactical, technical standpoint that we are kind of on the right road. People knock me and say I’m a defensive minded coach. I’m not! Modern day football is not the football that mostly has the high press. It’s mostly a mid-block where you can allow the team in and then play on the counterattack because we have very quick players on both flanks and up front.

From an organisational standpoint, I remember reading something from Morocco,where they said while other countries were thinking about politics, corruption, off the field and boardroom matters, they were thinking about the business on the pitch.We have to start thinking football from the standpoint of the players, the staff and that type of personnel who will get us playing the way we want to play again and achieving things that are possible.

If you look back at the World Cup, you would see Trinbagonians buying Brazil and German shirts and they are genuinely disappointed that these teams are out of the World Cup. But you don’t get that when it comes to us as nation. Our players don’t feel that sense of diehard mentality or twelfth man mentality from the people. Of course we all have our part to play. The team has its responsibilities but so does the other stakeholders. Off the pitch we have to place our egos aside and sit together and get it right for the benefit of football.

What can you tell us about your plans for the early part of 2023 as it relates to Nations League Qualifiers in March and of course beyond towards the 2026 World Cup?

I don’t know how long I’ll be in the job because football is a very volatile work environment but the plan that I have is for 2026 and a major part of that plan is us being in the League A of the Nations League and qualifying automatically for the regional tournaments like the Gold Cup which should also give us an opportunity to avoid the first round of the World Cup where we can join campaign in the latter rounds.

We weren’t prepared in the last World Cup qualifying campaign for that opening phase. It came a bit too early and we paid for that. We lost to Caribbean teams and were always digging ourselves out of a hole. It’s a one step at a time process. We don’t have a league at current so I want to use this opportunity when we start in January to have a locally-based team in training. The World Cup has pushed back everyone’s Leagues on the outside so the guys are still playing.

“We have two majorly important matches in March away to Bahamas and home to Nicaragua which can put us back into League A and Gold Cup automatically. Bahamas knocked us out of the campaign for Qatar and Nicaragua beat us in the Nations League in 2022 so there will be no margin for error.

“We need to utilise all our resources, tournaments and experience as avenues to get the country on the right path towards World Cup qualification for 2026.”

The Senior Men’s Team entertained fans at the Hasely Crawford Stadium for the first time since 2019, as the TTFA partnered with Courts for the Courts Caribbean Classic involving the national senior teams of Guyana, Barbados and the hosts in March. Three exhilarating days of football saw a thrilling end to the final match as Levi Garcia scored a late equalizer in a 1-1 draw with Guyana to secure the title for the host nation. The matches received widespread coverage throughout the region with live television broadcasts in Guyana and Barbados.

The Courts Classic kickstarted a consistent string of activities for the Angus Eve-coached T&T Men’s Team. T&T began its Concacaf Nations League campaign away to Nicaragua, losing 2-1 without the presence of Eve who was unable to travel due to personal matters. But the T&T bounced back in fine style with 2-0 and 4-1 wins over St Vincent and the Grenadines in Kingstown and Port of Spain in June. T&T also defeated Bahamas 1-0 in its second outing. The stage is set for a gripping finale in March with T&T needing to win away to Bahamas and at home to current league leaders Nicaragua to secure its passage to League A and the 2023 CONCACAF Gold Cup.

The T&T senior team also got much-needed experience in South American conditions, playing a friendly with Bolivia in Sucre in January which they lost 5-0. T&T made use of the September FIFA Window, accepting an invitation to compete in the King’s Cup 2022 in Thailand. The series saw the return of midfielder Kevin Molino from injury as T&T gave an impressive, promising display despite losing 2-1 on both occasions to Tajikistan and Thailand.