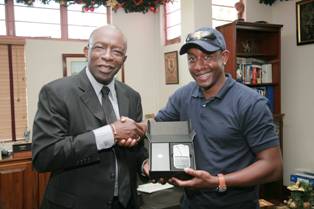 Russell Latapy will know if he will be re-appointed coach of the T&T ahead of the 2014 Fifa World Cup campaign on Tuesday. This was confirmed by Fifa vice-president and T&T Football Federation special advisor, Jack Warner yesterday. Warner said the T&TFF will announce its decision at a press conference, along with a full technical staff. The new coach and his staff will have the task of preparing T&T for the qualifying campaign to the 2014 World Cup Finals in Brazil.

While Warner has opted to keep the name close to his chest, speculation is Latapy will get the nod. The “Little Magician” held the post during the 2010 Concacaf Final Round World Cup qualifiers after Colombian Francisco Maturana vacated it on April 8, last year. Under Latapy’s reign, T&T had one win, one draw and five defeats during the qualifiers which ended in November along with Latapy’s short-term contract. The T&TFF executive and Warner were then expected to meet to determine the fate of Latapy and his assistant, former T&T captain Dwight Yorke two weeks later.

However, no decision was taken and Warner indicated that unless the federation secured financial support, it could turn to volunteerism. Warner said the T&TFF and its technical committee had a meeting to look at various technical staffs for teams but the underlying factor continued to be funding. “Who will pay for the staff for these teams,” Warner asked. Despite the lack of financial support, there have been calls to keep Latapy. Among those in support of Latapy is former national goalkeeper and technical director to the T&TFF, Lincoln Phillips.

Phillips believes Latapy should be kept in the position as well as be appointed Olympic (Under-23) team coach, a position currently held by Yugoslavian-born Zoran Vranes, who was one of Latapy’s senior team assistants. Phillips’ opinion was voiced at a review meeting held by the T&TFF to discuss the failed 2010 South Africa World Cup qualifying campaign and the steps that should be taken in preparation for Brazil 2014. With regard to the campaign, Phillips, a former national goalkeeper, said the players, for the most part, accepted Latapy as the leader and played with more intensity and he should be given the opportunity to carry on his duties as coach.

“However, like any other coach, he must be ultimately judged by his record and ability to manage players,” said Phillips. “I would like to see Russell also take advantage of any opportunity to increase his time in the coaching trenches. There is no substitute for game time experience on the touchline.” However, another former T&T international Alvin Corneal has also publicly stated he is against Latapy being installed as coach on a long term basis.
Russell Latapy