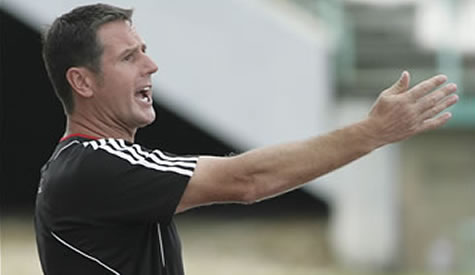 The tournament to be played between November 2-6 at the Mannie Ramjohn Stadium, Marabella will feature hosts, T&T, Haiti, Guyana and St Vincent and the Grenadines.

From the four-team, the top two will qualify for the eight-team finals in Martinique from November 26 to December 5.

Fenwick, a former England international and three-time Pro League Championship winning coach, is totally disgruntled over the non-selection of his players—mainly in defence.

“My disappointment comes for my players,” he said. “They deserve more.”

“Can the people in charge look beyond the petty issues surrounding Terry Fenwick?” he continued.

The Englishman boasts that his team hold’s the best defensive record in the domestic Digicel Pro League Championship and that says a lot about his defenders—however not one of his players are selected in the T&T Men’s Senior Team.

“Jabloteh is again the League's meanest team with the best defensive record thus far,” Fenwick argued. “And yet none of the Jabloteh defenders make it into the home based National team or even the squad.”

Jabloteh currently stands fifth on the League standings after Round One registered 11 goals and conceded 7, while fourth positioned Ma Pau SC scored 12 and conceded 7, as the pair holds the best defensive record in the Championship thus far.

Both teams, despite their current League defensive record, have no defenders with the T&T National team.

“Youngsters like Robert Primus and Joel Russell have back to back championships behind them while in their teens,” continued Fenwick.

“Karlon Murray has consistently proven his critics wrong because he is a very good defender; Sheldon Bateau is a graceful defender with bags of potential and Jamaal Jack is the find of the season. He is easily the best defender in T&T at the moment,” proclaimed Fenwick.

“And what does Cleon John have to do to make the squad,” added the Jabloteh coach who is appalled that his number one keeper isn’t getting his chance.

“He was voted in the best goalkeeper category in T&T for the last three years and never gets a look in. What have these kids done to be ignored at a time when the National team can't buy a clean sheet?

“None of these guys have figured in the locally based National set up but surely form, facts and stats must count for something... ask (T&T Technical Director) Lincoln Phillips?”

In their last seven matches, T&T have drawn 1-1 away to Guyana and 0-0 away to Belize. They were hammered 3-0 by Panama and suffered a 3-1 defeat against Jamaica but defeated Antigua and St Lucia in follow-up matches.

And in their final warm-up match Trinidad and Tobago were edged 1-0 away to Jamaica to an early penalty.

“Believe it or not, Terry Fenwick and Jabloteh want to see the National team be successful,” added Fenwick.

“We are all in this together. A poor National team reflects badly on the local professional league.

“A successful National team could be the tonic the Pro League and the whole nation is looking for.

“2014, World Cup Finals in Brazil is next. So let’s not stumble through the next three years and look for a quick fix at the last moment again.

“Let’s put some faith and confidence in these youngsters...give them a chance!

“They'll not let you down. These guys will be in their mid 20's when Brazil come around which is perfect. These kids will need to be brave, so will the decision makers, give them the chance! I dare you,” ended the Jabloteh coach.