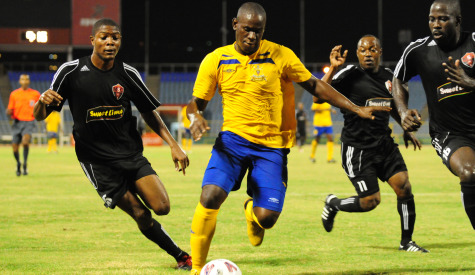 Injured Defence Force winger Kevon Carter would more than likely have been among the starters in the Trinidad and Tobago line up on Tuesday night and possibly among the goal providers had it not been for his recent broken leg injury.

But that setback didn’t prevent him from being one of the first to arrive at the team dressing room following their convincing 6-2 victory over St Vincent and the Grenadines in Group F action of the Digicel Caribbean Cup at the Mannie Ramjohn Stadium.

His long time friend Devon Jorsling led the way with a clinical hattrick and later dedicated the performance to Carter.

“I said before that each time I score a goal for Trinidad and Tobago in this tournament that it would be for Kevon because I know he would have been playing had it not been for the injury and he got three tonight. I think it put a smile on his face because he was in the dressing room for us. Hopefully it will help him mentally in his recovery as well,” Jorsling told TTFF Media after the win.

“I’m feeling great at the moment because we showed character to score four goals in the second half. Even though we scored first I don’t think we started as well as we wanted and St Vincent punished us with their two goals. But the coach had some stern words for us at half time.

He told us to buckle down and play to our strengths and to come out and show our superiority over the team. He really had some words for us during the break and it was really good to see how the boys responded in the second half,” Jorsling continued.

“I would like to keep up the strike rate because again I think by performing at the international level is the only way I have a chance of going abroad to play and once it means the national team also benefitting from the efforts of the players like myself then I will continue to work hard to achieve it.”

"It's a good start for us and obviously it showed the way that want to play and the way we are capable of playing.  I thought we didn't start the way we wanted to but we settled in and was able to take the game away from the opposition with some well taken goals," Latapy said.

"It's still a building process and you could see that in the way we played tonight. We still have a job to complete which is to try and win all our matches and go to Martinique with the same momentum," Latapy added

Team captain Clyde Leon said the team would not get carried away by the result.

“Yes we are delighted to come away 6-2 winners but the tournament is far from over. This is just the group stage and I want us to go from strength to strength.

We have shown that we are capable of handling these teams but the remaining games against Guyana and Haiti may not be as easy or in any case, we have to make sure our performances are up to par to ensure we get the winning results,” Leon said.

“Our structure of play is what is important. We are creating chances and we are finishing and once we can remain strong at the back and in the middle then I think we will be okay.

Six goals in our opening match is not a bad start. Now we have to get over the next two matches and keep our focus for the finals in Martinique,” added the W Connection midfielder.

T&T comes up against Guyana from 7:30pm at the Mannie Ramjohn Stadium on Thursday with Haiti meeting the Vincentians from 5pm.