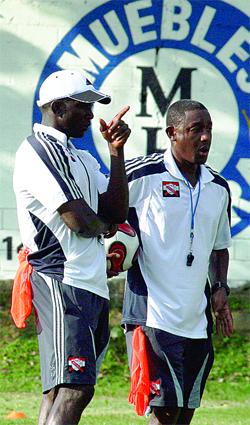 ...but unsure of coaching in England

However, the former T&T captain says he’s not sure if he wants to take another three-year coaching course that would make him eligible for a head coach position in the English Championship, if it is that a fair chance is not going to be given.

Yorke, now a football pundit for Sky TV, speaking a few weeks ago said when a chance comes, it has to be taken and he’s been known for doing that quite a few times in his career.

“I'm not going to do three more years to get qualifications and no one gives you an opportunity,” Yorke said last week. It is no secret that there are seldom black head coaches in the English top flight or Championship Division.

He said if he does return to the game in England as a coach, his style would definitely not be based on that of Roy Keane, the man he played under at Sunderland.

Yorke, who could be in the running to coach the T&T team as speculation continues over the future of current coach and his close friend Russell Latapy also served as an assistant coach for the latter part of his final season there. “The one thing when you become a manager is you've got to be able to deal with your players.

Individuals are different. Roy had been fortunate enough to play for Manchester United, at the very best of the best for 14 years. So he doesn't see outside that. I'm not saying he has to go around putting his arm round players every two minutes but he has to learn that individuals do need that from time to time,” Yorke said.

“That for me was the disappointing thing with Roy. I was there as a senior player and I'd tell him he could do things slightly different.

As a manager you've got to make tough calls but I was trying to help him and say 'you need to deal with this situation a little bit better'. My experience of being in the game for 23 years as a pro is that you've got to be able to deal with people. I don't think Roy is a people person.”

Yorke added that he is a one opportunity guy and would hope that aspiring stars grab their chances at first hand. “I’m a one-opportunity kind of guy,” is how he puts it. “I did it in football and in my life. I have one opportunity and I either do it or not and then I walk away.

I firmly believe in that.” “I've been very lucky and blessed. Hand on heart, I made mistakes. I was a very easy-going free spirit, a very laid-back West Indian type of bloke. If I could turn the clock back, I could have done things better but who wouldn’t?

My advice is to enjoy the moment because it doesn't last, it goes away from you so quickly. I realise that now, being out of the game, but I’m happy and I have no regrets.

If you ask me if I'd do the same thing again I probably would because truly I was happy and that's why my football was what it was. I've tried to change, two or three months sitting at home, and to be honest it's not me.”