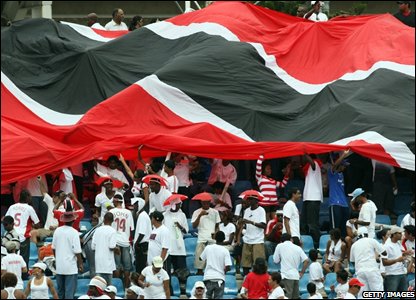 So it’s no secret that the Trinidad and Tobago public is craving for football action. Not since the 2-1 victory over the United States in the semi-final round at the Hasely Crawford Stadium has there been any real reason to celebrate a victory or feel proud as a fan of the Men’s Senior Team.

Certainly there is a lot at stake with the 2014 World Cup qualification right around the bend and Germany 2006 seems like a so long ago when you try to compare what since has caused that kind of euphoria that hit the country.

With Sunday’s friendly international against India being Otto Pfister’s first match in charge, we hear from a few of the fans who simply want to see something at least close to a dedicated showing from the “Warriors”.

“I am just anxious to see Otto Pfister’s philosophy and what he is bringing to the table. The score in this match to me is not important…what I want to see is formation, off the ball runs, collapsing and winning back the ball when not in possession, more intensity and faster game play, a sound attack..not hit and hope and some sort of idea when it comes to set pieces,” said avid fan Damian Joseph

“Once the structure and organization is there, the relevant players to fill the position will come later on.

I am setting my expectations low…both with our team and the opponents so that if they do perform it will be a pleasant surprise. The world cup games qualifiers are tough but with the foreign pros and some practice we can make the semi-final round. Each game we should improve.

“It takes time, we don't have to be the best just yet...we just have to do enough to keep advancing,”
Soca Warriors.net ‘s Inshan Mohammed admitted he still isn’t pleased with certain things but like most, he wants to see his team do well.

“I don't like the way things are running in the football office and I think things could get better with a little organization and better planning. However I can’t  help but support the T&T team,  the coach and the players.

“We are known for day dreaming, making error passes especially in our penalty area and taking forever to settle down. I want to see constructive intelligent football. I want to see men working hard on and off the ball. They  must contain their opponent and leave them with no space, close them down quickly, first to the ball, last to give up,” said Mohammed.

“I don’t like when T&T concede and they drop their heads. That must stop.  In fact it should motivate them to come back stronger.

“I want to see our players with fight and determination to the end, like if it was the last game of the year. Fitness and discipline is the key. A result against India is not important. However, it would definitely build the players confidence if they would to win and even better yet, do it handsomely.”

Another staunch supporter who has travelled around to back the “Warriors” is Nigel Myers. He sees Sunday’s match as an opportunity for the team to start rebuilding a relationship with the public.

“The decline in fortunes of our senior men's national team after our participation in the 2006 World Cup has been well documented. With that in mind, and another World Cup qualification campaign on the horizon, I view our upcoming international friendly against India as an opportunity for our players to reconnect with the footballing public.

“First and foremost I am looking forward see what Otto Pfister has been able to achieve with our players since taking up the mantle of head coach in May. What brand or type of football will we be playing? How is our fitness level? Are we playing with a sense of purpose?

Are we mentally focused? Will we be showing hunger and desire? And yes, as a fan, I ultimately want a comprehensive victory coupled with a good encouraging performance. With our first 2014 World Cup qualifier taking place less than two weeks after the India game, we need to treat this match very seriously,” Myers added.

And Anthony Valley hopes for nothing less than his fellow supporters.

“As a fan of football and my country, I will be following the game with mixed emotions. On one hand it’s depressing to see the current state of our football, but on the other hand I am cautiously optimistic that steps are being taken to bring about change.

“In saying that, I hope that the TTFF and other stakeholders of T&T football finally acknowledge that the fans also play a vital role in our team’s success; and steps will also be taken to ensure that we are no longer neglected.

“Regarding the actual match, I’m elated that the Warriors will be back in action after all these months. Although India is ranked lower than T&T I believe in this day and age no team should be underestimated.  I will particularly be looking forward to seeing if T&T’s record goal scorer, Stern John plays any part in the game as he is one goal away from taking his tally to 70,” Valley added.

For the sake of the fans, the “Warriors” will no doubt look to repay them for their good faith come Sunday and for the rest of the campaign. Did they get what they hoped for? We'll hear more from these fans later this week.