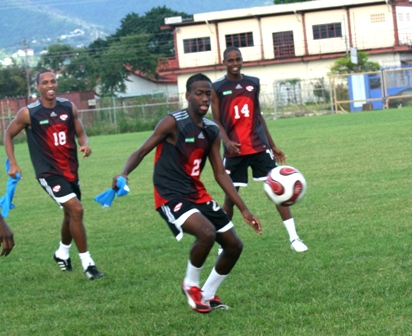 Kendall Jagdeosingh of American club Rochester Rhinos was among the players being looked at for the first time by Otto Pfister as the National Men’s team resumed training at the Ato Boldon Stadium on Monday morning.

Jagdeosingh is currently back home from his club and was joined by fellow US-based players Kevin  Molino and Devorn Jorsling. Puerto Rico Islanders’ Osei Telesford is also expected to be looked at.

Colombian-based midfielder Clyde Leon is also back home and will be with the team right into the upcoming matches with Bermuda (October 7) and Barbados (October 11) before returning to his club.

“We have had a look at some new players who  have been invited to the sessions. We looked at a couple younger players from the Pro League also like Shahdon Winchester and  Jerrel Britto and young Kevin Molino also looked very good in today’s session,” assistant coach Anton Corneal told TTFF Media.

Already out of the upcoming clash with Bermuda are injured strikers Darryl Roberts and Kenwyne Jones while Jlloyd Samuel has asked to be excused. Philadelphia Union’s Keon Daniel is also suspected to have contracted dengue fever and will be tested for such.

Meantime, it is likely the final squad will travel directly to Bermuda from Port of Spain instead of heading to a previously arranged training camp in Fort Lauderdale.

Corneal added that the European-based and American players will join the team in Bermuda instead of flying to Port of Spain.

The in-form striker had to leave the field in the 85th minute of Ipswich’s 0-0 draw with Middlesbrough on the weekend and there were fears that he was badly injured.

However it has been revealed that he received a stamp and is responding well to treatment.

Ipswich boss Paul Jewell said: “I had a word yesterday with Jason to see how his injury was and someone has stamped on him, it was an accidental stamp but it was still quite painful for him.

He had some ice on it on the way home and yesterday he had some treatment, so I’m sure he will be okay.”