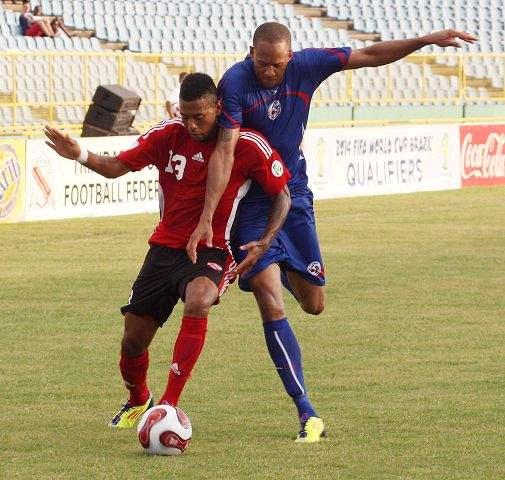 Rising Trinidad and Tobago star Lester Peltier begins his first telephone interview with FIFA.com with a slip, speaking in Slovakian instead of English. He stops, corrects himself, noticing the confusion with a laugh, and continues on. One can forgive the 23-year-old winger his muddled brain, the last few months a whirlwind of club trials on multiple continents and countries.

“It all happened pretty quickly,” the free-speaking Peltier said of the busy stretch that saw him finally land in western Slovakia, a long way away from his Caribbean roots. A young prospect with local Trinidadian giants San Juan Jabloteh, Peltier has had recent trials with Bruges in Belgium, Houston Dynamo in the USA, as well as English outfits Arsenal, Millwall, Portsmouth, Birmingham City and Cardiff City in Wales.

“My agent is a Dutch guy and my club in Slovakia now," he said. "FK AS Trencin is owned by a Dutch guy [former Dutch international and Ajax cult hero Tscheu La Ling], so they had a chat, brought me in and offered me a contract after a week of training.”

It’s a tough moment for us right now, but when we get through it, I can see this team going all the way back to the World Cup.Trinidad and Tobago's Lester Peltier

The town of Trencin is just a few miles from the Czech border, but a long way from Carenage, the small village where Peltier grew up playing on the white sand of northern Trinidad’s coastline and idolising such Soca Warriors as Stern John, Dwight Yorke and Cornell Glen. But it didn’t take Peltier long to settle into the fast-paced world of European football, scoring in his first appearance for the club and going on to become top scorer.

“The weather is a bit colder over here,” Peltier said with a laugh, “but the biggest difference is the football. It’s faster, better and it makes you develop fast as a player.”

The developments did not go unnoticed by new Trinidad national team coach Otto Pfister, who called Peltier in to replace Premier League standout and team captain Kenwyne Jones, who suffered a recent injury. “It was amazing getting into the starting 11, as up to that point I was just struggling to get myself in the squad,” said Peltier, who played 90 minutes of the shock loss to Bermuda before putting in a stunning three-goal showing in a 4-0 win over Barbados.

“Scoring a hat trick for your country is one of those truly special things,” added Peltier (aka ‘Corn Curls’), who possesses bags of pace and a layered ability to read the game. “Just a few short months in Slovakia made me ready to step it up in the national team, and we needed that with [Kenwyne] Jones and Carlos Edwards [another veteran Trinidad stalwart] out injured.”

While Peltier is basking in the afterglow of his breakout, fans of the Soca Warriors who appeared at the 2006 FIFA World Cup™ are facing nervous times, with the team’s failure to reach this summer’s CONCACAF Gold Cup sparking talk of a genuine crisis. With two games to go in the first round of group-stage qualifying in the North, Central American and Caribbean zone, Trinidad are in second place of Group B and need to beat section leaders Guyana, a team they already beat earlier in the competition, next week to stay alive.

“It’s do-or-die for us,” said Peltier, hoping to keep his position in the starting set-up with the return to fitness and form of the talismanic Jones. “Guyana is a good team that has had a bit of luck,” he added. “Our status in the region means that we must win, and the talent we have in the team should take us over the line.”

Bringing the style back
It’s not just talent and reputation that should see Trinidad and Tobago through to the next stage, according to young Peltier. A gifted younger generation and a return to the country’s technical, free-wheeling roots could well make a difference too. Peltier, Kevin Molino (21) and Khaleem Hyland (22), who is taking part the UEFA Champions League with Belgian side Genk, form the core of a new group of ultra-talented islanders.

“Me and other young boys are looking to step it up and show the way,” enthused Peltier. He, Molino and Hyland all hail from the same area of the larger island of Trinidad and have a chemistry and understanding that can change the current style of the national team. “We know everything there is to know about each other and we’re young and hungry,” he said. “When you put this together with the experience of guys like Kenwyne [Jones] and Edwards, we have a serious team.”

Facing elimination with the wrong kind of result on Tuesday in Georgetown doesn’t dampen Peltier’s youthful spirit. “Sure, it’s a tough moment for us right now, but when we get through it, I can see this team going all the way back to the World Cup. It’s been a long time since you’ve seen a Trinidad and Tobago team playing the game we’re playing – putting the ball on the ground and passing it around,” he added, an enthusiasm and conviction entering into his voice. “We’re bringing the style back to Trinidad and Tobago.”