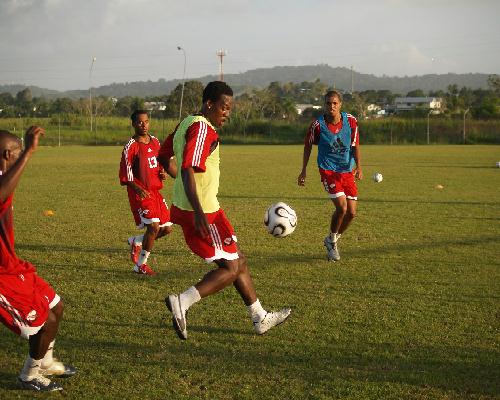 Thanks for telling us what we've all known for at least the last 20 years. What are you going to do about it though?

By identifying the administration of the Trinidad and Tobago Football Federation as the source of the plight of the men's senior national team, "Gally" Cummings, Clayton Morris and Marlon Morris were merely regurgitating either their own words or the words of others in these pages yesterday. We've heard it all before gentlemen. Only the context has changed.

This time, the lamentation comes in the wake of Friday's 2-1 loss in Guyana that renders tomorrow's return fixture at the Hasely Crawford Stadium as a deserved celebration for the visitors (and the many Guyanese who live and work here) even as the diehard locals gather for yet another wake and a not-to-be-missed opportunity to pass judgement on a World Cup campaign that has perished in its infancy.

Essentially, this is no different from previous disappointments. If the propaganda emanating from the bars cashing in on the post-curfew guzzling frenzy is to be believed, this is the last straw. Over the weekend and continuing no doubt for much of this week, we will be forced to endure the sanctimonious outrage of both the cognoscenti and the commoner, united in their articulate or crudely-expressed belief that we cannot go any lower after the Providence experience and that this humiliation will be the catalyst for long-overdue reform of the game.

Of course, there is an ironic twist to it all with Trinidadian Jamal Shabazz masterminding Guyana's first-ever victory over T&T in a senior full international which advances them to the semi-final phase of CONCACAF World Cup qualification for Brazil 2014. It will be nothing short of a footballing miracle if Shabazz's side were to finish in the top two next year in a grouping that also includes Mexico, Costa Rica and El Salvador.

There was nothing the least bit miraculous about Friday's result though. Indeed, it was very much on the cards. At some point, we'll finally have a look at that game, and again all the experts will offer their supposedly well-informed analyses and perspectives, no doubt seeking to present what we all know already as if it were some sort of ground-breaking revelation.

So let's do away with the charade, shall we? What are you all going to do about it? Not me, you! Yes, you "Gally," you Clayton and you Marlon. Why, now that you have made your blindingly obvious pronouncements, should the media take up the issue, when you all, the people who have supposedly given so much to football in this country, are not prepared to lead the charge?

Football in Trinidad and Tobago is at its lowest point – so far – because football people like it so. They want others to fight their battles while waiting in the wings like scavengers to collect the spoils. A little TTFF work here, a little FIFA appointment there with a bit of travel and other perks thrown in are all it takes to transform a strident critic into a compliant acolyte.

Every so often some personality associated with football (it happens in other sports too, especially cricket, but we talking football now) will call and complain off the record about this, that and the other, suggesting that someone in the media should do a proper investigation. Well, all you spineless jellyfish can take a flying leap into the sea of cowardice from which you came. You can't claim to be so big in the dance and so much in the know yet hide behind other people for fear of recrimination because you don't want to jeopardise the little end you getting from football.

Over the years there have been a couple attempts by well-meaning people, those in and out of the game, to engineer a reformation, only for them to be either let down or set up by the many snakes slithering through the dense undergrowth of self-serving intrigue that is essentially what the administrative level of Trinidad and Tobago football amounts to.

Granted, there are some good people in the game, some whose only interest is to do the job the best that they can. But they are mere functionaries, individuals who have no say whatsoever in the policies and programmes that can bring about the transformation needed.

I was going to say "desperately" needed, but is the need any more desperate now than the deliberate over-selling of tickets 22 years ago, the firing of Bertille St Clair after our best-ever Gold Cup performance a decade ago, or the blacklisting of the nucleus of the national squad in a bonus payment dispute after the 2006 World Cup finals appearance?

If you are expecting the executive of the TTFF to resign en masse then you are not from here. Take some time, if you can, and watch the public hearings of the 1990 and Clico/HCU Inquiries and you will better understand why there is almost no culture in these parts of taking responsibility for your actions. Worse than that, notice carefully how any attempt at transforming the culture and exposing the culprits is met by intimidation and hooliganism at all levels.

So, unless you esteemed football personalities, some of whom have been frustrated by the internal systems administering the game, are prepared to do anything beyond further talk, the best thing to do is to stay quiet, sit back and enjoy the slide.

It's no more than you deserve.