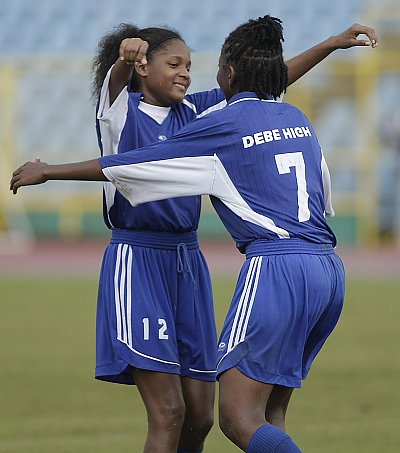 A hat-trick of goals from star-forward Kayla Taylor handed Debe High School the 2012 BGTT/ First Citizens Girls Intercol South Zone title yesterday, as they held on to a 3-2 win over Vessigny Secondary in the championship match at Manny Ramjohn Stadium in Marabella.

Yesterday’s victory saw Debe High School bag their second title of the season thus far, after copping the zonal League trophy in fine style last week. Taylor proved to be the pivotal factor in the Debe squad as she opened the goal-scoring floodgates in the 25th minute. At the half, the score remained at 1-0.

Taylor would strike again at the resumption, netting another for the dominant south team in the 60th minute to send them 2-0 ahead. Fifteen minutes later, Taylor secured her hat-trick and sent her Debe team to a convincing yet incomplete 3-0 lead.

In the final ten minutes, a persistent Vessigny team continued to push and were duly rewarded with two well-deserved goals. However, it was too little too late, as the Debe team tasted sweet revenge against their southern counterparts. In last year’s final, the 2012 South Zone winners were dethroned by Vessigny in the final.

Manager of the Debe team, Clive Auguste was elated with the victory and heaped praises on his squad for their competitive consistency.

“It really was a hard-fought match. This was a repeat of last year’s final, but this time we got the better. We’ve held this title in 2008, 2009 and 2010, and were ousted in the final last year by this same team (Vessigny). But, we’re just taking back what’s ours (title),” he proudly stated.

Auguste admitted that the Vessigny team played well and produced a number of goal-scoring opportunities, both in the first and second periods. He lauded the entire team, especially the defence, for standing their ground, especially in the dying minutes.

“We absorbed so much pressure. Our defence was tight and Taylor made the difference for us today (yesterday). We now have to put our focus on the Big 4 match against St Augustine on Monday.

We’re still taking it one game at a time, but we have to retain what’s ours,” he added. Auguste indicated that the team’s focus will now be toward the National Girls League and Intercol titles.

In one of the most thrilling finales, Debe Secondary fended off a late attacking surge from Vessigny Secondary to cop the BGTT/First Citizens Secondary Schools Football League (SSFL) South Zone InterCol title with a 3-2 win, yesterday.

While national attacker Kayla Taylor was in fine form scoring a hat-trick, her efforts were almost overshadowed by Khadidra Debisette and Teneisha Cobham, who grabbed goals in the 78th and 80th minutes, respectively.

Taylor opened the scoring in the 13th minute, as Debe held a slender lead going into half time. However, she found her second on the hour mark, which seemingly put Debe in pole position for a straight forward win.

When Taylor scored in the 75th minute, just five minutes before the end of regulation time, the match seemed done and dusted. The runaway South Zone winner, which went through the season with eight wins in as many matches, had its nerves shattered when Debisette pulled one back with two minutes left.

This showed as the defence seeped another in, this time from the other in-form attacker, Cobham, who struck in added time. It, however, was too late as Debe persevered to grab yet another zonal InterCol title.

Over in Tobago, Bishop’s High overcame a determined Scarborough Secondary to take the Tobago zone Intercol title at the Dwight Yorke Stadium, Bacolet. Captain Kristen Julien led the way with a double strike to spur on the maroon and white-clad girls to a hard fought 3-2 win.

Bishop’s pressured Scarborough from the onset and were rewarded when Julien found the back of the net twice within the space of 14 minutes. Julien, Krystal Taylor and Anya Akili combined to keep Scarborough’s custodian Aaliyah Charles busy in the upright.

Cherise Roberts found the net for Scarborough, as the first half ended 2-1 in favour of Bishop’s. On the resumption, Bishop’s continued to attack, much to the delight of their lively band of supporters.

However, Scarborough showed great resilience as they rallied back with Roberts creating numerous chances. She was eventually rewarded with her second and the team’s equaliser in the 60th.

With momentum on their side, Scarborough looked determined to seal the victory. However, against the run of play, Bishop’s April Ewing got the match winner with a long-range shot, lobbing the ball over the goalkeeper’s reach.

Goalkeeper Charles then switched to striker as Scarborough pushed up their players to attack in search of another goal but fell just short. Bishop’s now takes over the reign from last year’s winner, Roxborough Secondary.

In the North/East division, both semifinals were played with St Francois sealing a spot in the zonal final for the third consecutive year, while St Augustine fended off a plucky Providence Girls to take a win on penalties.

St Francois dropped San Juan North 2-0 via a double from Samantha Kingston (42nd and 45th). Naomee Guerra scored the equaliser for St Augustine which was down 1-0 within three minutes through a goal from Providence standout Chelcy Ralph.