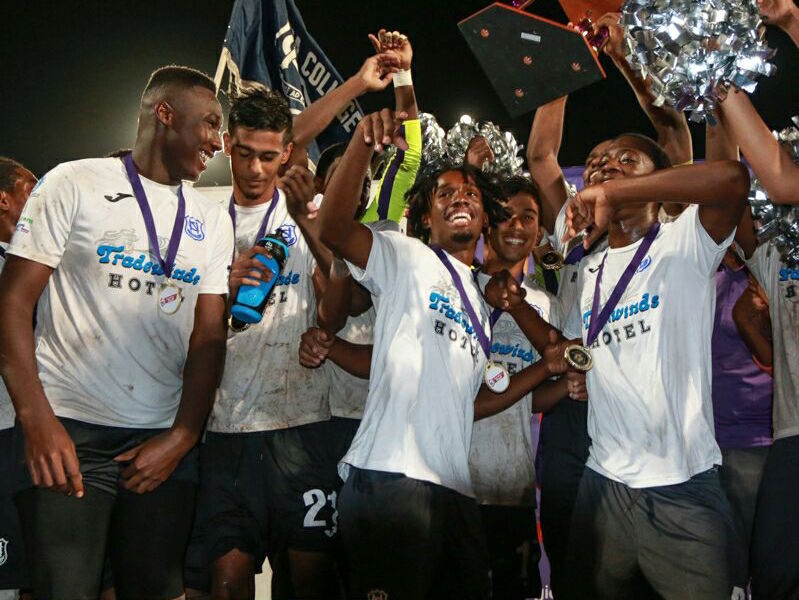 Isaiah Lee, one of the season’s most consistent players, and Justin Sadoo scored in the first half to gave Naparima a 2-0 halftime lead. Omri Baird netted a penalty, midway in the second stanza, but Naparima held firm until the final whistle by referee Rodphin Harris.

Naparima have emerged with silverware during the past three years, under the guidance of coach Angus Eve. The Naps squad copped the 2014 SSFL Premiership, the 2015 SSFL Premiership and Intercol titles, and the 2016 Big 4 Cup.

Eve said last evening, “we deserved the win. We’ve played well during the season but it’s just that players came and went due to national team duties.

“This is the first time we’ve been able to field our full team,” he continued.

The former national captain, referring to the 2016 Premiership winners Shiva Boys and the 2016 Intercol champs San Juan North, went on to state, “credit to all the teams that won titles this season.”

He pointed out, “it was a good season. The League has a standard and you can see that no team dominated this year.” Lee put Naparima ahead in the 14th minute, slotting a right-footer to the right of Presentation goalkeeper Jabari Gray, after Renaldo McIntosh, on the right flank, waltzed his way past a trio of defenders and set up the prolific striker. Presentation midfielder Nion Lammy later had to held his head after her missed a glorious opportunity to knot the scores.

In the 27th, winger Jordan Riley, on the right, was given acres of space and he found Lammy in the six-yard box. But the national Under- 17 player skied his left-footed attempt with the net gaping.

This miss came back to haunt Presentation as Naparima got their second goal in the 38th. Renaldo Francois, from the left, squared the ball to Sadoo who neatly placed his 25-metre drive to the right of an airborne Gray.

Presentation were presented with a chance to get on the scoresheet in the 73rd, when defender Mylz Barrington was bundled over inside the penalty box by Naparima defender Khris Stoud. And Baird obliged, to direct his right-footer beyond the outstretched left-hand of Fernandez.

Francois could have gotten his name on the scoresheet in the 83rd, when he chased down a long ball but, from close range, he could only watch in agony as his left-footed shot was denied by Gray.