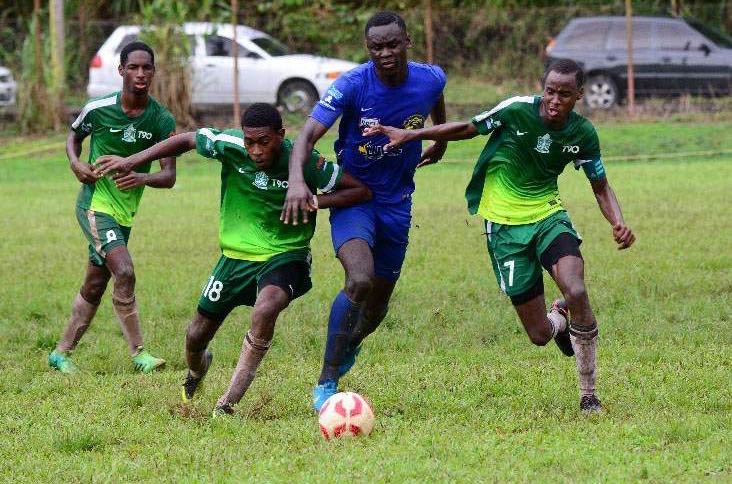 On very heavy surface at Maraval, made difficult by the mid-day rainfall, Shiva Boys were kept at bay until five minutes into the second-half when Mason broke the deadlock, and three minutes into time added one, he converted a penalty-kick to push the Hayden Ryan-coached team to maximum 15 points from five matches in the 16-team competition, two points more than fellow southerners, Presentation College who battled past Carapichaima East Secondary 2-1 blanked Signal Hill 3-0 at Guaracara park, Pointe-a-Pierre.

Omri Baird opened the scoring for Presentation with his third item in two matches as early as the first minute, but Mecaheil Alexander got Carapichaima East level in the tenth, only for Jaiye Shepperd to get the decisive item for in the 31st.

In perhaps the match of the season so far, Juda St Louis scored a second-half to rally Naparima College to a 3-2 win over St Augustine Secondary after trailing 2-0 at home.

Stephon Eallie fired the”Green Machine” ahead in the 42nd minute and Anthony Samuel then doubled the advantage in the 63rd before St Louis took charge with items in the 76th, 80th and 90th minute for an unlikely win.

Over in Tobago, visitors St Mary’s College battled to a 3-2 win over host Signal Hill thanks to a brace from substitute, Tyrese Spicer.

Still in Tobago, Kishorn Hackshaw scored a goal in each-half and Kernell Sween, the other for Trinity East in a 3-0 defeat of Speyside.

St Anthony’s vs Fyzabad Sec - Postponed due to waterlogged field