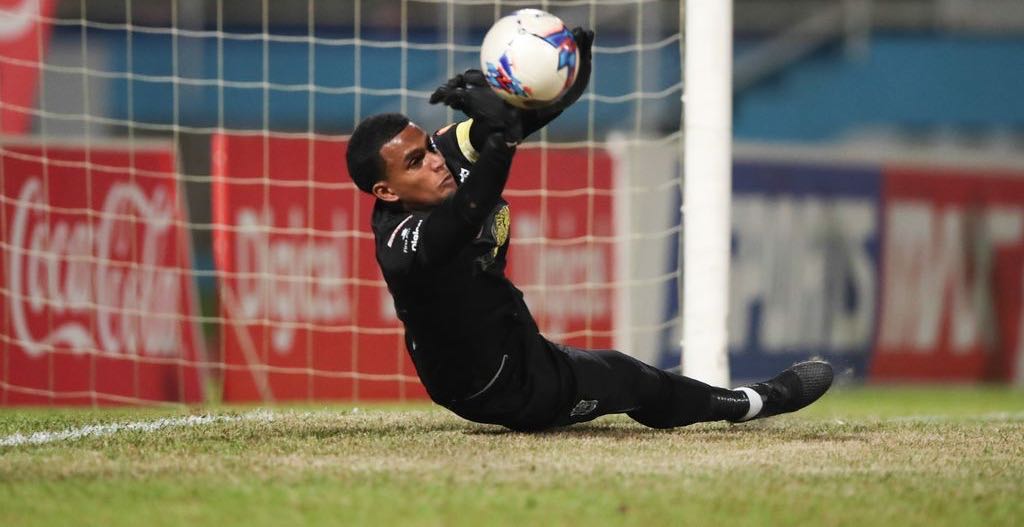 In the first shootout, San Juan's Ak­il John­son missed when his shot re­bound­ed off the up­right. Then with a per­fect sea­son on the line, Seon Ship­ley made no mis­take with his at­tempt from the spot which sends the crowd in­to wild cel­e­bra­tions as the ball hit the net at the back of the goal.

In the ear­ly ac­tion of the match-up, San Juan mount­ed a se­ries of ear­ly at­tacks that had Na­pari­ma on the de­fence in the first half as both teams were play­ing at that venue for the first time this sea­son but San Juan was play­ing like it was their home ground.

San Juan thought they might have scored when Elair Brew­ster's well-float­ed ball from a left side free-kick found the head of Re­nal­do Boyce, but it can­noned off the cross­bar and in­to safe­ty.

Na­pari­ma came to life in the lat­ter part of the first half and from a Deck­lan Mar­celle's cross from the left, they got their first chance at goal. How­ev­er, Isa Bram­ble con­nect­ing head­er did not trou­ble keep­er Em­manuel John in the 32nd minute. With ho­n­ours even af­ter that at­tempt on the San Juan goal, the teams went in­to the dress­ing room even­ly matched as the half-time score­line stayed goal­less.

NAPARIMA College's captain and custodian, Levi Fernandez, produced a spectacular performance in the final of the National Coca-Cola Intercol by flying exceptionally well throughout the game before saving three penalties in an intense shootout. San Juan North Secondary fell victim to a 4-3 loss from the spot at the Ato Boldon Stadium, Couva, after the match ended 0-0 in regulation time. With penalty kicks deciding the newly crowned 2018 Champions, Fernandez saved his side's perfect season and captured the title which eluded them for the past three years.

San Juan's winger, Isaiah Chase, tested Fernandez in the early minutes of the match by taking two shots from distance but the goalkeeper was well alert to the tasks at hand. Naps thought they had opened the scoring in the 22nd minute from a set piece but the goal was ruled offside despite Isa Bramble placing the cross into the back of the net.

Fernandez was in flying form when he saved a powerful shot from San Juan's captain, Ronaldo Boyce in the 47th minute. Two minutes later Chase skied his effort from outside the box. Naparima's midfielder, Mark Ramdeen, then crept into the game when his shot struck the post in the 63rd minute. Fernandez was then called to action in the 72nd minute when he had to dive low to deny Chase of a goal from a shot inside the six-yard box.

Boyce then had his second attempt blocked five minutes later by the unbeatable custodian. The score remained 0-0 until the end of the match as both goalkeepers made their impact. Elisha Garcia managed to save two consecutive shots in the shootout for San Juan North but they were unable to captivate from their advantage.

Speaking after the match, MVP of the match, Fernandez said, "Being the captain of this spectacular side for this season it was a big responsibility for me and when everyone thought it was over in the shootout, I was still calm and confident in myself that I would save at least one penalty." He continued, "It is a remarkable feat to go unbeaten for the entire season and to keep five clean sheets in the Intercol. We know it would have been a physical game against a strong team but I think I did my job which was to keep the ball from hitting the back of the net and we give thanks to God for us achieving this prestigious milestone."

He added that it was not the on­ly suc­cess achieved at the school this year.

"We want to rec­og­nize that foot­ball is a great part of the Na­pari­ma Col­lege. We have pro­duced Mark Ramdeen who was a mem­ber of the Na­tion­al Un­der 20 team. We con­tin­ue to pro­duce play­ers who go on to top Na­tion­al suc­cess," Dowlath added.

He al­so said that the school had 14 na­tion­al ti­tles, the most of any sec­ondary school in T&T.

Re­spond­ing to the Na­pari­ma vic­to­ry Coach Eve said the school has been suc­cess­ful in foot­ball over the past few years.

"That con­sis­ten­cy was proven by us play­ing the en­tire sea­son un­de­feat­ed and when we went in­to the In­ter­col we said we will not con­cede any goals. The boys showed their dis­ci­pline and that is the hall­mark of the school it­self. Every one of my 25 play­ers was tremen­dous. Cap­tain Levi Fer­nan­dez was un­be­liev­able in his lead­er­ship," Eze said.

He thanked all the play­ers, de­fend­ers, strik­ers, mid-field­ers, their par­ents, mem­bers of staff, spon­sors and the prin­ci­pal for help­ing the team to se­cure the vic­to­ry.