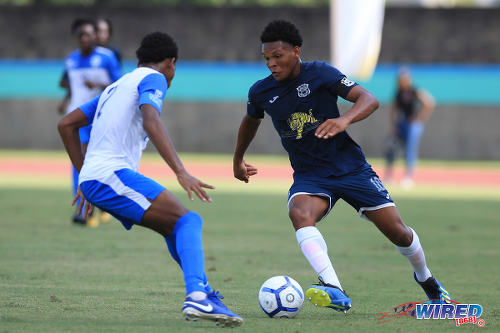 NAPARIMA College extended its lead at the top of the standings after round eight in the Shell/First Citizens Secondary Schools Football League (SSFL) Premier Division at the school’s home ground at Lewis Street, San Fernando, yesterday.

Defending champions Naparima, clinging on to a one-point lead ahead of St Anthony’s College, defeated Trinity College (Moka) 3-1 to extend its lead to three points. Ezekiel Kesar scored a brace for the defending champions and national youth player Mark Ramdeen got the other item.

St Anthony’s, playing at the college’s school ground in Westmoorings, were held to a 2-2 draw by fellow North Zone team East Mucurapo. St Anthony’s took the lead in the 28th minute through Kairon Manswell, a lead it held onto until half-time. In the 75th minute, Zion McLeod equalised for Mucurapo, before Darius Douglas regained the lead for St Anthony’s in the 83rd minute. Mucurapo never gave up as Delany Zamore equalised again for “Compre” in the 85th minute to leave the match all squared after 90 minutes.

Carapichaima East Secondary, only three points behind Naparima before yesterday’s matches, were held to a 1-1 draw by mid-table team Queen’s Royal College at the Carapichaima ground. The only other top five team to come out victorious yesterday were Presentation College, San Fernando who edged San Juan North Secondary 2-1 at Manny Ramjohn Stadium in Marabella.

In other matches, St Benedict’s moved from the bottom of the standings with a 1-0 win over Speyside Secondary, Trinity College East crushed St Mary’s College 5-0 to move from 12th to eighth and Pleasantville Secondary jumped from tenth to sixth place with a 4-1 win over the fading Malick Secondary. St Augustine Secondary were on a bye, yesterday.

Round nine of the competition will be played on Wednesday at 3.30 pm.

St Augustine Secondary are on a bye

Ezekiel Keser scored a dou­ble for the south­ern­ers and Mark Ramdeen scored the oth­er to open a three-point ad­van­tage at the top of the 15-team ta­ble.

At St Mary's Ground on Ser­pen­tine Road, St Clair, Mal­ick Sec­ondary found them­selves at the end of a brace from Flex Lewis and a gen­er­al les­son from Pleas­antville Sec­ondary in a com­pre­hen­sive 4-1 loss to the vis­i­tors.

Un­der the swel­ter­ing hot sun and ir­ri­tat­ing sand­flies at the venue, Mal­ick's de­fence was hard­ly set­tled when Lewis pounced for the open­ing goal in the first minute, to hand his team the ad­van­tage.

How­ev­er, the Pleas­antville cel­e­bra­tions were on­ly short lived, as Nick­ell Alexan­der lev­elled the scores with his item in the 4th minute. But the vis­i­tors seem to have got­ten the bet­ter of the fluc­tu­at­ing af­fair that fol­lowed.

Coach An­tho­ny Samuel's re­luc­tance to plug the gap­ing hole in his de­fence on the left side, made them pay for it dear­ly. This time Lewis, the scor­er of the first item-Lewis, found him­self at the end of a cross, af­ter Sher­win An­drews drove skil­ful­ly past some three de­fend­ers on the right side, and drilled the ball through an open Mal­ick de­fence be­fore Lewis met it at the far post to fire home in the 33rd minute.

Lat­er, Year­wood set up his team's fourth goal, with an­oth­er surg­ing run down the right flank be­fore de­liv­er­ing for Ephraim Brown to tap home in the 43rd minute for a 4-1 lead, which they took to the half-time in­ter­val.

There­after Samuels sought to stem the flow of at­tacks down his left side by mak­ing a few ad­just­ments. But there was the an­swer for sub­sti­tute Hezron Matthews who came in for Sher­win An­drews, and with on­ly his sec­ond touch of the ball, he al­most squeezed Year­wood's left side cross past the Mal­ick cus­to­di­an.

Mean­while, at Cara­pichaima Ground, the home team would count them­selves lucky to pre­serve their un­blem­ished record, in a 1-1 draw with Queen's Roy­al Col­lege.

The Roy­alians were un­lucky not to have tak­en the lead from the penal­ty spot ear­ly in the en­counter when the speedy Ja­heim Grander­son was hacked down in the box dur­ing one of his ster­ling runs down the flank. The en­trust­ed Dar­rion Brad­shaw missed the spot-kick. They were made to pay for that missed chance when Isa­iah Samuel fired the home team in­to the lead.

The Roy­alians had to wait for the equalis­er in the sec­ond half from Miguel Cross. Am­nd in a last-ditched at­tempt for the win­ner, the dan­ger­ous Nathaniel James was put through on a one-on-one with the goal­keep­er, but he some­how missed the tar­get, for a share of the points.

Trinity Moka are on a bye