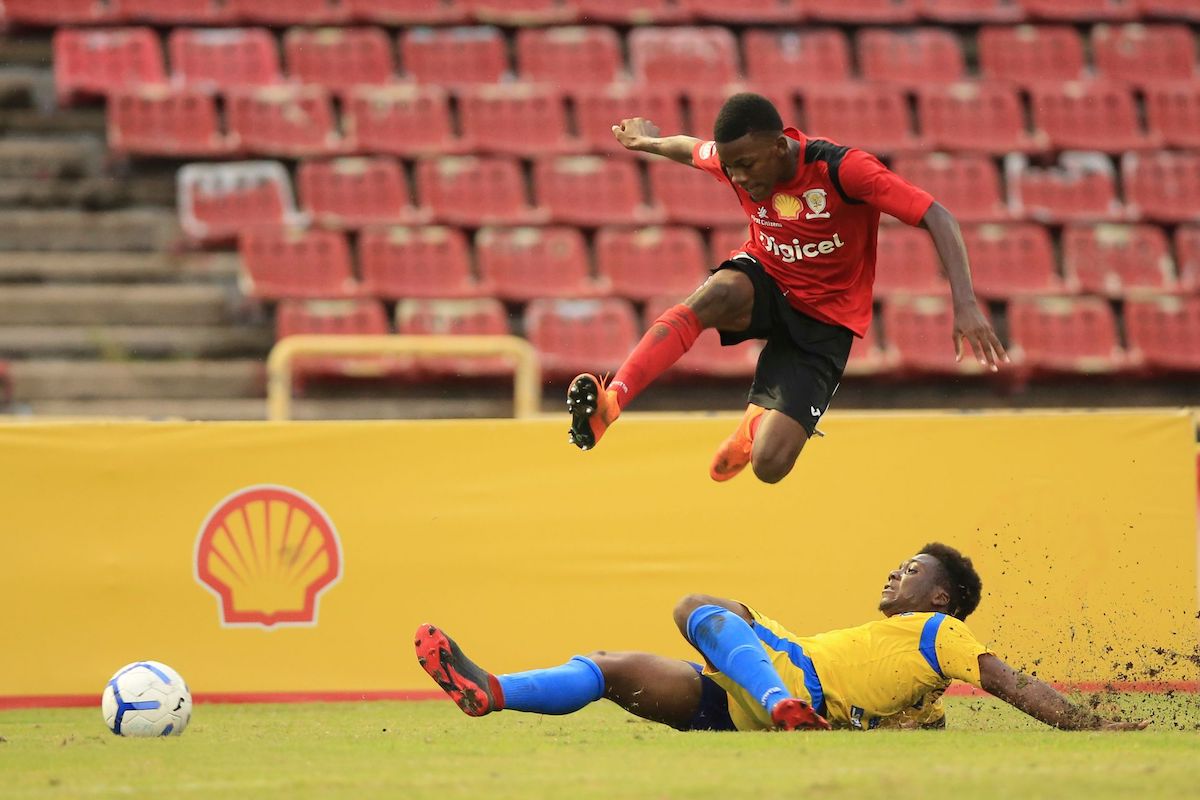 They will meet in the sec­ond match of a dou­ble-head­er at the Ato Boldon Sta­di­um in Cou­va on Fri­day at 5 pm, fol­low­ing the clash be­tween Cara­pichaima East (Cen­tral) ver­sus San Juan North (East) from 3 pm.

The “West­moor­ings Tigers” had three play­ers score first-half goals in the thump­ing win over Spey­side.

Kiron Man­swell opened the scor­ing with a goal as ear­ly as the third minute. Jean-Heim McFee then put the Ronald Daniel-coached St An­tho­ny’s Col­lege fur­ther ahead with a 30th-minute item.

The vis­it­ing side had a num­ber of chances but just did not seem to have their scor­ing boots on as most of those at­tempts were ei­ther sent over­bar or wide of the goal.

St An­tho­ny’s led 3-0 at half­time but could on­ly pro­duce one more in the sec­ond half and it came off the boot of Kai Phillip, who came in as a sub­sti­tute for Man­swell in the 58th minute. He net­ted the fi­nal item in the 79th.

ST ANTHONY’S, commonly known as the “Westmoorings Tigers”, strolled into the semi-final round of the Coca Cola National Intercol with a comfortable 4-0 win over Speyside in their quarter-final fixture on Tuesday.

Kiron Manswell, Jean-Heim McFee, Kaihim Thomas and Kai Phillip got their names on the scoresheet for the Tigers, who dominated the contest from the first whistle to the last.

A sparse crowd, estimated at 200 persons, turned up at the venue to watch a match which was played on a soggy outfield.

However, on the field, only one team turned up to play, as Speyside – with the exception of striker Adriel George – were lacking, in all areas.

Manswell opened the scoring in the second minute, with a left-footed shot past goalkeeper Kadeem Joseph, after a blistering run down the left flank from Thomas.

In a rare attempt at goal, Speyside’s DeLeon Beckles had a shot from 30 metres, which flew inches overbar.

St Anthony’s bombarded the Speyside goal with constant attacks but were wasteful on a number of occasions.

Defender Jordan Barclay met a corner from Omari Wiltshire but sent his header wide; Thomas raced on to met a ball from winger Zion Williams but failed to hit the target, while Williams raced past defenders Jonathan Thomas and Dionys Carrington but smashed his right-footer against the post, with Joseph beaten.

Midfielder McFee decided to take matters in his own hands, as he created space in the middle and fired a long-range right-footed shot beyond the reach of Joseph in the 30th minute.

Thomas extended his team’s lead four minutes later, with a freekick from the right flank which sailed through the hands of a bemused Joseph.

The Tigers took things easy in the second half, as they maintained ball-possession, with little trouble from their opponents.

A Barclay header forced a good save from Joseph in the 51st minute, following a corner from Wiltshire, and McFee was at the receiving end from Thomas’ right-sided cross, but his header was denied from Joseph.

George had the closest opportunity to pull one back for the visitors, as he forced goalie Josiah Perez to tip a shot overbar.

A minute later (78th), Phillip completed the scoring with a powerfully-struck right-footer, which flew past Joseph.

On Friday, St Anthony’s will meet Presentation San Fernando in the second match of a semi-final double-header at the Ato Boldon Stadium, Couva.

Carapichaima East and San Juan North will face off in the earlier semi-final, with the final carded for December 4 at the Ato Boldon Stadium.