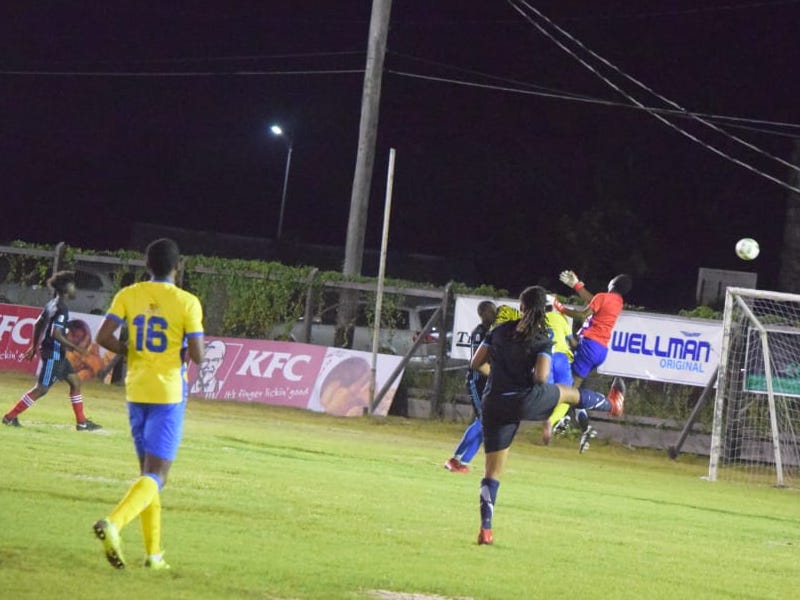 The match kicked off at 19:00hrs at the Ministry of Education (MOE) ground on Carifesta Avenue and it was fast paced from the first whistle with the Trinidadians occupying Lodge’s half for long spells but lacking the final dangerous touch.

As Lodge piled 10 players behind the ball, wary of the attacking treat of the visitors who had won all their previous games in the history of the tournament, target man and skipper Dorwin George lead numerous counterattacks that fizzled out to nothing in the presence of the sturdy back line of Shiva Boys’.

Both teams looked ominous from set pieces and both teams could have gone ahead from such plays but both keepers were on top of their game. Lodge’s custodian, Rashad ‘Shadow’ Roberts came out as the hero of the match and despite sustaining a lot of licks between the uprights from the physical Trinidadians, he saved a penalty, while Shiva Boys’ missed three to give the Guyanese a 3-0 win via kicks from the penalty mark after full and extra-time had finished 0-0.

In the opening semifinal which was most subscribed, Annai Secondary of region nine (Upper Takatu – Upper Essequibo) edged DC Caesar Fox (Waramadong) Secondary of region seven (Cuyuni-Mazaruni) 2-1 to book their place in tomorrow’s final that will be played at 19:00hrs at the same MOE venue on Carifesta Avenue.