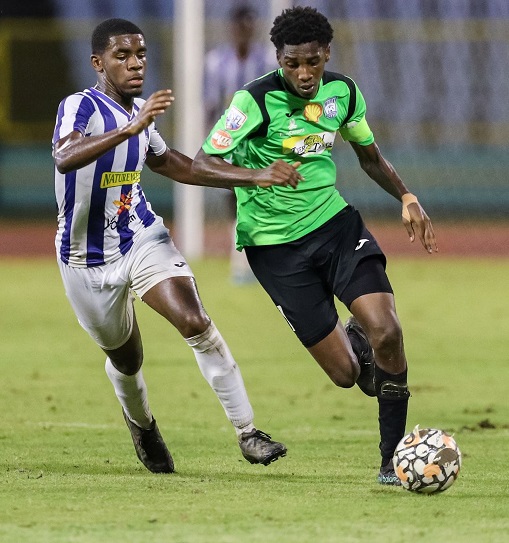 Fatima College, beaten in the final of the Tiger Tanks Secondary School Football League's Premier Division League, stormed back with a detrimental display in the Coca-Cola Intercol play-off, by demolishing Blanchisseuse Secondary School 11-0 at the St Mary's College ground on Serpentine Road yesterday.

Michael Chaves led the scoring with a hat-trick and both Aidan De Gannes and Kade Collier netted a brace each in the win. Fatima, as expected, dominated from start to finish in the encounter, scoring almost anytime they attacked.

Apart from Chaves, De Gannes and Collier, the other goals for the Mucurapo Road lads came from Christian Bailey, Khiba Romany, Joshua Mason and Logan Maingot.

Meanwhile, both Queen's Royal College (QRC) and East Mucurapo came from behind in their respective matches to seal quarterfinal spots in the north zone.

At the Hasely Crawford Stadium in Mucurapo, East Mucurapo trailed by two goals in the second half but stormed back to win from the penalty spot 5-4 against St Anthony's College.

Known as 'The Tigers', St Anthony's got goals on each side of the half from Joachim Callender and Jeremy Bobb. But as the match approached the end, Maalik Jarvis pulled one goal back from a header at the back post, before Jarrel Brewster converted from the penalty spot to make it 2-2 in time added on, when St Anthony's Russel Francois was adjudged to have handled the ball in the box.

The game had to be settled from the spot and Kayshawn Hutchinson's miss for St Anthony's cancelled out an earlier miss by East Mucurapo's Mickel Toussaint.

However, Brewster scored in sudden-death penalties to send the Mucurapo men in front, while St Anthony's Anthony Samuel sent his attempt crashing against the woodwork to ensure that East Mucurapo advanced to the quarterfinals.

At Fatima College ground, QRC came from behind to tie the match against Tranquility in a high-scoring match 5-5. They later prevailed 3-1 from the penalty spot, courtesy of an almost perfect display from the spot for the Royalians, coupled with three missed attempts by the Tranquility men, who only recently defeated Trinity College 4-2 on penalties in their opening Intercol match.

In another match, Malick also advanced to the quarterfinals by beating St Mary's, 3-1, in the second match of a doubleheader at the Hasely Crawford Stadium.