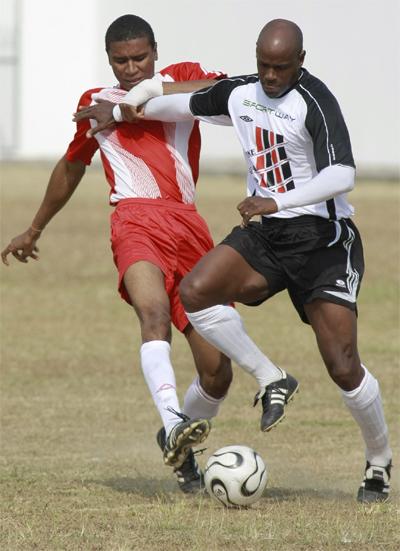 Leonson Lewis, one of the lethal attacking players of this country’s 1990 Road to Italy campaign, is now the technical director of the Naparima College football team and describes his current post “as the best job in the world.”

Lewis played professionally in Portugal from 1990 to 2002 scoring 82 goals before returning to W Connection where he has been in charge of the club’s Under-14 and Under-16 teams.

“Coaching has its ups and downs but when things go right you feel very proud and that’s how I feel at the moment. I think my job is the best in the world because of how much I enjoy it.

“I prefer to work with the youths because they grasp things better and are willing to learn all the time and it’s easier to change the bad habits than that of an older player,” said Lewis who netted 21 goals in 30 official appearances for T&T.

“I want to thank principal Michael Dowlat for the opportunity. It’s all about trying to help the school and my coaching is about trying to get players on national teams, local professional teams and also opportunities abroad,” added the man who struck a beavertrick against English side Crystal Palace in Port-of-Spain.

Looking back at his transition from player to coach, the ex-Naparima College player said, “At first it was difficult because you still feel the urge to play but yet your legs don’t allow you. Over the past three years, I’ve become comfortable and fallen into my own style.

“I have to thank Stuart Charles Fevrier also for teaching me everything from breaking down a team to how to coach a team in every department. He really put the blueprint on what I should do as a coach.”