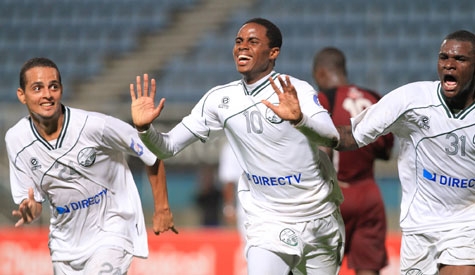 Trinidad and Tobago and DIRECTV W Connection midfielder Joevin Jones said he is fired up for Saturday’s Toyota Classic Final against Super League leaders Club Sando from 8pm at the Ato Boldon Stadium.

“My teammates and I are confident for this Final,” said Jones. “We just need to keep [our cool] and play together on the day.”

Jones said that it’s very important to himself and W Connection, to keep up his performances, because everyone at the club depends on him.

Jones added, “As a club we want to always win trophies and every player understands that.”

But the 22 year-old Connection star is also wary of the challenges ahead.

“It will be hard Final,” he believes. “(…) because they (Club Sando) are motivated by their fans, and also, half of their players passed through W Connection. That would be another one of their motivations.

“Not because we are playing a Super League team it means that it is going to be an easy Final. It’s going to be a hard one,” he reiterated.

Last weekend Club Sando, led by former St. Ann’s Rangers head coach Anthony Streete, became the first second tier outfit to ever qualify for the Final of the Toyota Classic – which pits the Super League against Pro League clubs – since the tournament’s inception in 2006, by defeating Defence Force 3-2 in the semi-final round.

It was in the fifth and final minute of injury time that Devon Modeste headed in the winner, while Kerron Smith and Anthony Parris had a goal each.

McKnight is Sando’s captain and key player in attack, but was tamed in the semi-final. However he had a pair of goals against Police FC in a 3-1 win in the preliminary round while former San Juan Jabloteh player Nigel Daniel scored the other.

McKnight then struck his third item of the tournament in a 2-2 full-time score against Caledonia in the quarterfinal round before his side eventually won 11-10 on penalties.

Connection’s leading scorers thus far in the tournament are Hashim Arcia and Jerrel Britto with two goals each. However Hashim remains the closest player to challenge McKnight for the Top Scorer Award on the final day, as Britto along with teammates Daneil Cyrus and Jamal Clarence all missed the semi-final round due to trials in Vietnam with the strong possibility of earning contracts with V-League clubs.

But the absence of the trio didn’t have a negative effect on Connection against Guaya United in the semi-final round.

Jones scored one and was influential in two more goals as Connection cruised past Guaya 3-0 to secure its place in the Final.

It was also revealed on Friday during a random draw that Connection will meet Guaya again in the quarterfinal round of the Trinidad and Tobago Football Association (TTFA) managed FA Trophy from 3:30p.m. at the La Savanne Recreation  Ground, Guayaguayare on Wednesday 4 December.

Other FA Trophy quarterfinal round match-ups include North East Stars against Point Fortin Civic from 3:30p.m. at the Mahaica Oval in Point Fortin, Central FC against Petrotrin Palo Seco at the Palo Seco Recreation Ground from 6p.m., while the venue for Queen’s Park Cricket Club (QPCC) FC against Malabar FC is still undecided.

Connection head coach Stuart Charles Fevrier would typically take it one game at a time, first focusing his attention on Saturday’s Final.

Connection in chase of a third Toyota Classic, included a 2-0 win over Real Maracas in the preliminary round, then a 4-1 win over Malabar FC in the quarterfinal round.