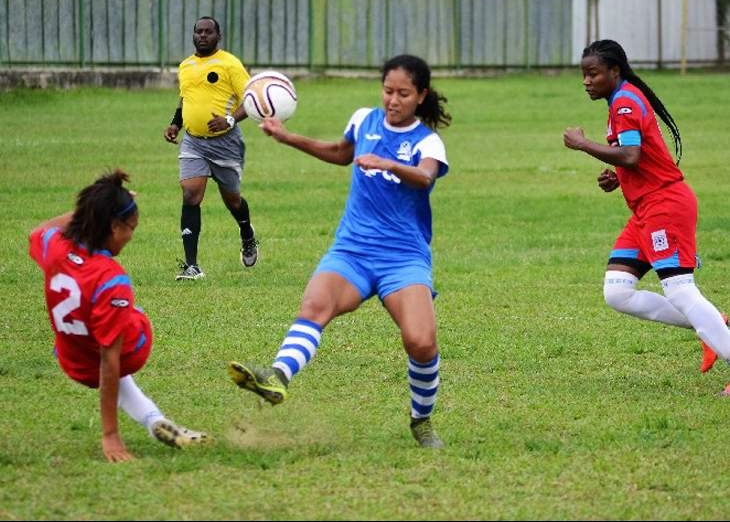 Henry opened the scoring as early as the fourth minute, but Melissa Wooling converted a penalty for the Parkites in the 37th, before national youth team defender Ward netted the match winner on the stroke of half-time to improve to maximum nine points.

Down South at Clifton Hill Ground, WI Sports Real Dimension rebounded from its loss to Rangers by hammering host, Pt Fortin Pioneers 6-0 led by a pair of goals from former national player, Telesia Joseph, in the tenth and 25th minutes.

The trio of Jemilia Mathlin (52nd), Jenelle Cunningham (63rd), Janine Francois (85th) also chipped in with a goal each after Pioneers also conceded a 20th minute own goal.

St Augustine has only itself to blame though as it missed several opportunities while its goalkeeper, Nicollette Craig, also made some spectacular saves to keep her side in the game.

On Sunday, at Lumsden Recreation Ground, Gasparillo, visitors Tobago Chicas made light work of Club Sando, in a 6-2 thumping.

The hosts were very unlucky to concede a very soft first goal in just the third minute when Chicas' Saphia Holer, got the visitors on the score sheets while Kristen Julien made it 2-0 in the 16th. Club Sando seemed frustrated and out-of-sync, with the coach making an early substitution in the 20'.

However, Tobago continued attacking with the nippy and skilful Tsaianne Leander scoring in the 40th minute for a 3-0 cushion at the half.

Five minutes into the second-half, Leander got another and then in the 54th minute she completed her hat-trick.

With the result beyond doubt, Club Sando got two late consolation items from Jasandra Joseph in the 70th, and in the 84' with a far-post strike from Elise Simon.

In the First Division, Trincity Nationals continued their winning ways with a 4-0 trouncing of neighbours St Augusitne FC ''B', led by a treble from Adanya Phillip, and the other by Nia Honore at Eddie Hart Ground, Tacarigua.

And at Patna Recreation Grounds, Diego Martin, home team Diego Martin Central got its first victory for the season, 2-0 over Malvern with two items from Shania Lewis.

However, the saga of a lack of officials is also still at the forefront as it was stated that south referees will not do any Women's League games due to non-payment, but WoLF Executive members are saying that have made all payments and the only outstanding year is in 2012, which the powers that be nullified the outstanding debt due to financial constraints faced by the League.