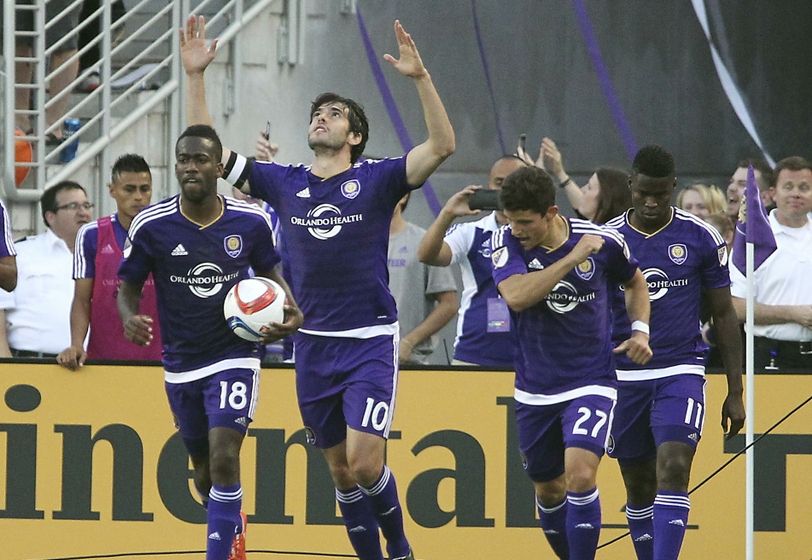 KEVIN MOLINO began life as a professional footballer with the San Juan Jabloteh and Ma Pau football clubs in the Trinidad and Tobago Professional Football League.

With his distinct, bleach-blonde hair, the 24-year-old Trinidad and Tobago international is now a poster boy for Orlando City SC, where he will line up alongside former Brazilian great Kaka, Jamaican goalkeeper Donovan Ricketts and Costa Rica forward Jairo Arrieta, when the United States second tier champions make the leap up to Major League Soccer for the 2015 season. Molino is coming off a phenomenal season with Orlando City, having scored a season record 20 league goals and being named USL Pro Most Valuable Player of the Year, 2014. Molino was also joint top-scorer at the 2014 Caribbean Cup football championship. And TT Pro League CEO Dexter Skeene was not bashful declaring Molino a successful product of the Pro League. Just a 15 year-old, the TT Pro League, is undoubtedly the top professional league in the Caribbean, employing footballers across the region—Trinidad and Tobago, Guyana, Antigua-Barbuda, St Lucia, Grenada, Jamaica, St Kitts-Nevis, the Dominican Republic, Haiti—and as far away as the USA, Colombia, Brazil, Nigeria and Sierra Leon. Still in its development stages, Skeene, sees the organisation in its present form as a stepping stone for young talent such as Molino, rather than the “big leagues” in England, Italy and Spain, which combined have hundreds of years of tradition and history. “We are a stepping stone to the bigger leagues and are sending a lot of players abroad, Skeene said. “Not just to England anymore. We have a lot of players going to developing leagues in Europe and Asia such as Finland, Slovenia and even Vietnam and Thailand.”Joining Molino in the MLS next season will be T&T teammate and recently-signed Chicago Fire player Joevin Jones, who many believe at age 22, already has all the tools necessary to make a career of professional football. The Pro League has also produced a couple of Belgium exports in Khaleem Hyland from San Juan Jabloteh to Genk, via Zulte Waragem and Sheldon Bateau from North East Stars to Mechelen. Shahdon Winchester and Aubrey David both play in Finland for FC Jaro; Kendall Jagdeosingh plays in Thailand, while Daneil Cyrus and Hughtun Hector ply their trade in Vietnam. The Wolfe brothers Anthony and Glenton, along with Cornel Glen and Densill Theobald have played in unlikely places such as India, where the money is better than they might have earned playing at home. “A major part of the revenue stream of any local professional club is getting players to the foreign leagues,” Skeene declared, while acknowledging that with low turnouts of sometimes just 200 diehard fans, no Pro League club could operate on gate receipts. Except for the military teams Defence Force and Police, most survive on monthly Sports Company subsistence. Still, Skeene sees the Pro League as a success, even with its present challenges. “We have a competitive league where the outcome of few matches can be predicted. In recent seasons we have seen Police, North East Stars and Central FC and so, consistently challenging the established clubs such as Defence Force, W Connection and San Juan Jabloteh for honours,” Skeene said. “We also have our teams qualifying for the CONCACAF Champions League. Skeene acknowledged that no TT Pro League club had made a major impact on the CONCACAF scene, since the 1980’s when Defence Force won two CONCACAF Champions Cup titles in 1985 and 1987 and Police also reached a final. But there have been some good moments from the likes of Joe Public, San Juan Jabloteh and W Connection.“If we had kept all our players at home, I am sure we would have had much stronger showings at the CONCACAF level,” said Skeene, a former T&T international striker himself. “But part of growing is making a space for the young ones coming up. The older players go abroad and that in turn makes space for youngsters to grow into good professionals themselves. That is the goal of the Pro League.”