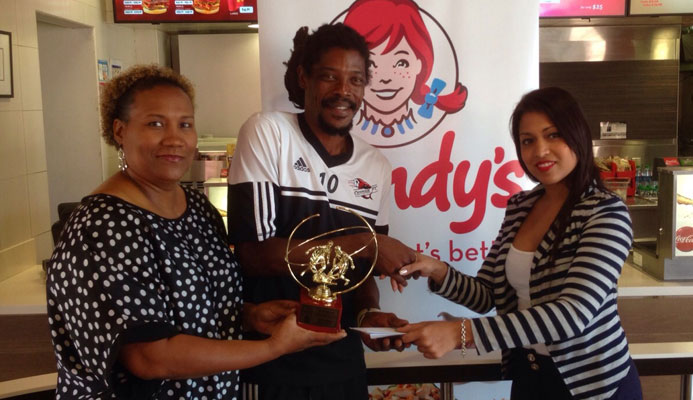 VETERAN MIDFIELDER Marvin Oliver is no longer a member of Digicel Pro League 2014-2015 champions Central FC. But there are serious doubts as to if the 40-year-old left was forced out of the club or if he left on his own accord.

Reports emerged that Central FC had terminated Oliver’s contract with immediate effect, with Oliver receiving the news yesterday morning when he arrived for training at the Manny Ramjohn Stadium, Marabella.

The termination letter, published on online website Wired868.com and allegedly unsigned, read in part, “team manager Kevin Jeffrey has informed me that you have requested the club to terminate (sic) your contract as you wish to move to a new club. It is with great reluctance what I will accede to your request and arrange for your release effective (immediately).

Oliver, in a candid telephone interview with Newsday yesterday, revealed that Jeffrey summoned him and gave him the letter.

“When I read it, it informed me that my request had been granted (but) I never made a request to leave the club. And it said from immediate effect. I don’t know if it was a letter they had all the time and (were) just waiting on the moment to give it to me,” said the former Crab Connection, North East Stars, Caledonia AIA and San Juan Jabloteh midfielder.

Oliver emphasised, “remember we signed a letter of petition stating we didn’t want Sancho and Kevin Harrison to return to the club because they don’t run the club like a professional club.

“We’ve had various meetings and I (said it’s) nothing personal but I said we signed a petition because of certain reasons. At the end of the day, I may be the one to take the (blame) but I feel free, like I got off (from) bondage. I’m probably the happiest man on earth who just lost his job.

“I wanted to honour my contract, being the pro that I am, even if I didn’t like how things were going. No-one can say that Marvin Oliver never gave his all to his club. They did some cruel things to me over the past couple of weeks but I held my head high.

I have nothing to be ashamed of.

I was abiding by their rules and their laws.” Oliver admitted that his playing time was cut since Dale Saunders took over from Ross Russell late last year but, whenever he made queries to the technical staff, was told that he was a model professional.

“Mr Sancho used to (say) that life starts and stops with Central,” said Oliver. “But it doesn’t.

With the grace of Yahweh, I will see my way through. (Central FC) don’t control me.” Concerning his immediate future, Oliver said, “a man always have a future. I have my home team Jabloteh who I hold closely to my heart. It have (St Ann’s) Rangers who have a lot of promising youths who need the little experience and it have ambitious clubs who think they can win the League this year. With my help and my credentials, I will be a plus to any team.” And he is contemplating taking legal action for wages for what he believes is wrongful dismissal.

“Definitely they would have to compensate me for my losses because I’m unemployed right now. I would have to be a mad man to ask to leave my job without nothing in place. I have kids to see about and I have a reputation that can be tarnished by this. Something is going to have to come out of this because I honoured my contract, and that was the main thing. They didn’t have the respect at least to thank me or let me say goodbye to the players. I guess that’s how they do things.” Sancho however completely contradicted everything Oliver stated, making it emphatically clear that Oliver asked to leave the club.

“What happened (yesterday) is that Marvin asked for a release (on Monday) and the club said he’s free to go, like any other player at the point in time. He’s asked to leave the club, I guess, because of playing time, as far as I understand from management.

He wasn’t happy with the playing time that he was getting, so he wanted to move on, which is fine.

“We have some very talented players coming through and Marvin, being the other side of 40, we obviously will have to look towards the future.” Sancho, the former national defender, countered, “the question that you need to ask Marvin is if he did not ask for a release why he just didn’t say that when we gave him the letter.”

Asked whether Oliver’s request to leave was verbal or written, Sancho replied, “it doesn’t matter. The point is that he communicated that he wanted to leave. When he got the letter (in the) morning he could have just said to the coaching staff ‘this is a mistake, I want to stay at the club’. I was standing there, he didn’t come to me and say anything.” Questioned if the parting of ways stemmed from the petition, Sancho replied, “everyone’s training, everyone’s playing very hard and the club is moulding into the right way. I have a job to do, I have a club to run and I’ll run it as a business. I make decisions based on the club’s well-being.

We’re second in the table, I don’t have time for grudges.”