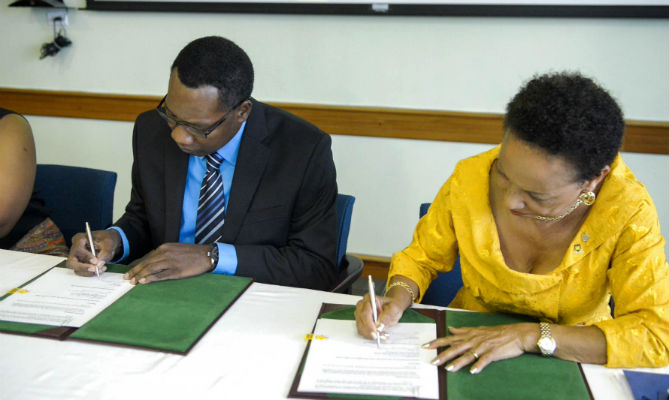 On Monday 1st February, DIRECTV WConnection FC and the Academy of Sport – High Performance Center of the University of the West Indies, Cave Hill Barbados Campus signed a historic Memorandum of Understanding. This agreement will see the joint establishment and implementation of various programs and projects aimed at the development of football and its supporting areas for the mutual benefit of both parties, and by extension the Caribbean. Key areas of the MOU included development of the Player, Administrator, and Coach. The Academy of Sport currently fields the UWI Blackbirds Football Club which participates in the Barbadian Premier League and will benefit directly from the partnership.

The signing ceremony, which took place at the Cave Hill Campus was attended by DIRECTV WConnection’s Board Chairman Mr. David Martin, who signed on the club’s behalf. Parties of note included Pro Vice Chancellor and Principal Professor Eudine Barriteau, Academy of Sport Head Mrs. Amanda Reifer and Mr. Roland Butcher, Head Coach of the Academy of Sport. Commenting on the new partnership, Mr. Martin stated that he was a believer in progress on the field as well as through the growth of outside relations which the MOU facilitates. He continued by saying that “Our mission statement of the club speaks to the harnessing of young talent and we have never restricted ourselves to the Trinidad and Tobago market. We have coaches and players from all across the Caribbean…”

Club CEO Ms. Renee John-Williams whilst unable to attend the signing ceremony expressed her satisfaction with the formation of the partnership as she stressed the significance of networking and relationship building for the growth and development of local and Caribbean football. “Over the last 17 years, our organization has experienced great successes both on field and off field, much of which can be attributed to the importance we have placed on building regional and international partnerships from a business perspective. The relationship that we have sought to build with the University broadens our reach across the Caribbean with an aim to not only raise the standard of football across the region, but to benefit from a more educated approach to its management and administration. Sports administration and education is now a growing field in the Caribbean…it has opened avenues for our athletes to continue their careers…”

Pro Vice Chancellor Barriteau stated that for as long as she could remember, Trinidad and Tobago had excelled in football and it was an opening for the further development of the student footballers’ skills.

The club also made mention of further partnerships at the local level to be announced at a later date.