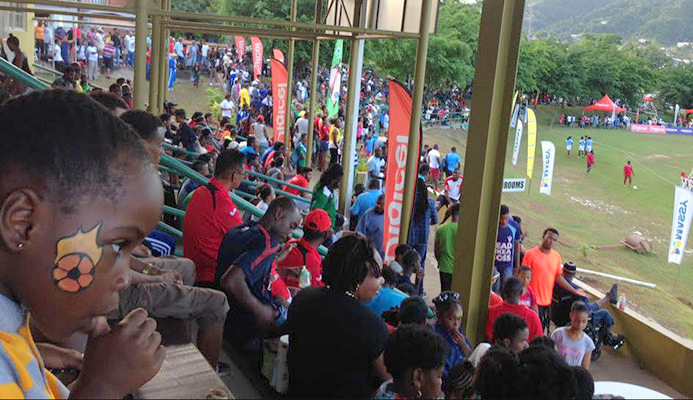 Willis Plaza bagged a double and was involved in another two goals as San Juan Jabloteh sent Morvant Caledonia United skidding to a 4-2 defeat on their home debut at the Morvant Recreation Ground which attracted over 2,500 spectators by many estimates on Sunday.

Plaza, who said he is always self-motivated to perform, “crowd or no crowd”, later dedicated his match-winning performance to his grandmother Florentine Cipriani, girlfriend Kareena Rose, and cousin Elizabeth Plaza, who all celebrated their birthday on Sunday.

But the 29-year-old Trinidad and Tobago international forward, Plaza, who was surprised by the turnout of spectators, felt he should have had more goals to his name before being substituted with four minutes left.

“I feel a bit disappointed because I had more chances I could have put away,” said Plaza, whose career landed him stints in Vietnam, Belgium and El Salvador. “But this was a big surprise to see the amount of people coming out to support the Pro League.”

Impressed by the turnout, Lambkin said, “It’s the first time I have ever seen an event like this attract such magnitude of people in Morvant. This is what the community needs—something to distract the young people from the negatives.”

Plaza silenced the thousands—mostly made up of home supporters— surrounding the Park Street venue with the quickest goal of the season, beating national teammate and goalkeeper Marvin Phillip with a right-footed laser after just one minute and 16 seconds following a release down the right by Noel Williams and slipping beyond defender Taje Commissiong.

Jamaican defender Adrian Reid then cushioned the visitors 2-0 on 42 minutes from the penalty spot after referee Keon Yorke ruled that defender Otev Lawrence had brought down Plaza in the area.

Tyrone Charles joined in on the fun, netting against his former employers in the 45th minute for a comfortable 3-0 lead. Phillip was hung out to dry by his defence when Charles had a free run at goal after Plaza headed-on a deep pass from the back by Reid.

Morvant Caledonia, without key attacker Jameel Neptune who was red carded against Rangers, did however pull a goal back in stoppage-time of the first half through Morvant resident Kareem Joseph from the penalty spot—reducing the deficit 1-3 before the break—after Tobago referee Yorke ruled that goalkeeper Shemel Louison had brought down forward Kordell Samuel just inside the area.

Louison, a Grenada international goalie, and a handful of his teammates protested to the officials that Samuel was impeded outside the area, but Yorke stood with his decision in pointing to the spot.

However Plaza restored Jabloteh’s three-goal cushion on the hour mark for a 4-1 score by chipping goalkeeper Phillip, who had moments earlier made two separate saves to deny Plaza and Kion Joseph. But the ‘Soca Warriors” ‘keeper was hung out to dry once more after Plaza broke the backline to score his third league goal in as many matches this season as Jabloteh dominated despite being without suspended captain Damian Williams (red card) and injury listed Keyon Edwards, Kennedy Hinkson and Nathan Lewis.

Akim Armstrong pulled back another goal for the home side in the 73rd minute for a 4-2 score after climbing in the Jabloteh area to head past Louison off a Kareem Joseph cross. But it wasn’t enough against the visitors who weathered the wet surface better following earlier rainfall.

“Our defence let us down today,” said Morvant Caledonia head coach Rajesh Latchoo after his third game in charge since being promoted at the helm in pre-season. “If we didn’t make those mistakes we would have won. But today individual mistakes let us down. At this level you can’t allow mistakes because you will be punished. The guys had no better reason to perform [their best] today because the support was very good.”

“It’s the best feeling as a footballer, to come home and feel this love and support,” said the resident and Morvant Caledonia captain. “The support was tremendous and it’s more disappointing that we were unable to reward the turnout with a win, being such a good crowd.”

By the look of things, the Park Street venue in Morvant, which became available through the invaluable support of the Ministry of Sport, the Sport Company of Trinidad and Tobago through its facilities manager Anthony Blake, and the local corporation, has surpassed the Pro League games’ attendance witnessed at the Mahaica Oval in Point Fortin (home of Point Fortin Civic) and the Barataria Recreation Ground (home of San Juan Jabloteh), and may have also outdone yesteryear attendances at Guaguayare Secondary School Ground (home of Super League side Guaya United).

“This (Morvant) is the home of football passionate people,” said resident and Defence Force veteran forward, Devorn Jorsling, who came out in support at the Morvant Recreation Ground. “And the crowd will be even bigger when we (Defence Force) play here against Morvant Caledonia.”

Morvant Caledonia will next return to the Park Street venue on November 6 when they host Defence Force, but must first lock horns with Central FC and Club Sando in away fixtures.