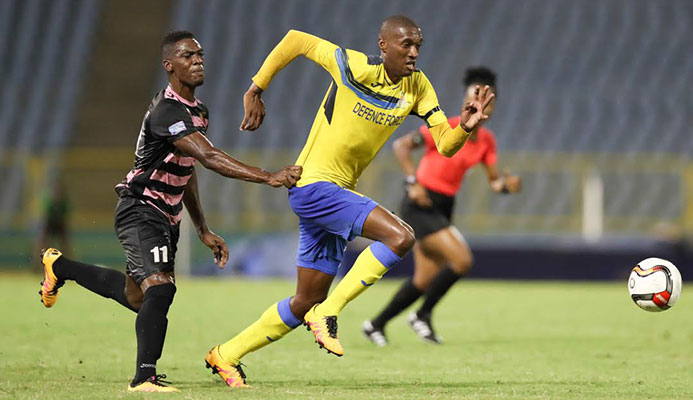 DEFENCE FORCE continued their winning ways of late in the Digicel Pro League with a 2-1 victory over San Juan Jabloteh on Sunday evening, in the second game of a Round Two Match Day Two double-header at the Ato Boldon Stadium, Couva.

Defence Force, who were eighth in the 10- team table a month ago, have risen to fifth after registering their sixth straight victory - three in the First Citizens Cup and three in the League.

As was the case in their 2-0 win over St Ann’s Rangers last Tuesday, striker Devorn Jorsling and midfielder Hashim Arcia found the back of the net for Defence Force, while Jamaican defensive midfielder and team captain Damian Williams got the lone item for Jabloteh.

Jorsling, on Sunday, got things going for the Army-Coast Guard combination in the 20th minute, with a wonderfully-taken free-kick, from 25 metres out, which flew to the top left-hand corner, past the leaping goalkeeper Shemel Louison.

This goal was Jorsling’s 11th in those six matches and, with national coach Tom Saintfiet in attendance, the stockily-built centre forward continued to show that despite his age (he will turn 33 on December 27), he has not lost his finishing touch.

Arcia was the only Trinidad and Tobago player called up for a training camp by Saintfiet who started Sunday’s game; fellow Defence Force player Curtis Gonzales was not on the match-day team while Jabloteh’s forward Willis Plaza was a second half substitute.

Arcia, in the 23rd minute, got a ball down the right by winger Kerry Joseph and squared it to ex-national left-back Aklie Edwards who forced a good save from Louison.

However, the second goal duly came six minutes before the halftime interval. Edwards played a ball down the left to Jorsling and the striker whipped in a cross which was met by a leaping Arcia, who placed his header to the left of Louison.

Defence Force seemed content to hold on to their advantage in the second half but got a scare in the 86th when substitute Tyrone Charles narrowly missed the target with a left-footed shot.

Jabloteh pulled one back in the dying seconds when Williams met a low freekick from the edge of the box on the right by Charles, and backheeled it past a stunned Andre Marchan in the Defence Force goal.

In the earlier contest on Sunday, at Couva, Ma Pau Stars rallied from a goal down to blank cellar-placed Point Fortin Civic 3-1.

Jamille Boatswain netted for Point Fortin in the 30th but Stars, in the second half, replied though Kerry Baptiste (55th), Ancil Wells (59th own goal) and Jason Scotland (61st penalty).

And, at the Manny Ramjohn Stadium in Marabella on Sunday, Morvant Caledonia United strolled past St Ann’s Rangers 2-0 with strikes from Kareem Joseph (10th) and Sheldon Holder (50th).

On Friday, at Couva, leaders Central FC were held to a 1-1 draw by Club Sando while Connection breezed past Police 3-1.