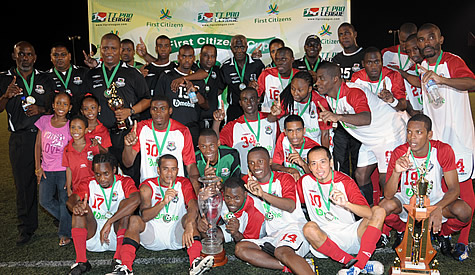 The Eastern Lions had reached the final the last two years without completing the job, including a 1-0 loss to Defence Force in last year’s decider.

However, after falling behind to a clever Devon Jorsling second-half item, Joe Public got an equaliser from defender Carlyle Mitchell before Phillip came up trumps in the penalty shoot-out.

Defence Force was expected to come into the contest the fresher of both teams as the Eastern Lions were coming off a 4-1 loss in the Concacaf Champion League to MLS Club, Columbus Crew on Thursday at the same venue.

But Joe Public showed little effect from that encounter and started the better of the two teams with vice-captain, Trent Noel hitting the post within five minute with goalkeeper Kevin “Barthez” Graham beaten.

While the action on the field failed to keep the fans interested for the opening 45 minutes, just as the second-half was about to kick of a fireworks display at the nearby FireOne compound lit up the night sky and seemed a preview to the action that was about to take place.

Just about the same time the fireworks display was winding down, Defence Force striker Jorsling lit up his team when he latched onto a through ball and lobbed the advancing Phillip for a 1-0 lead in the 63rd minute.

Jorsling, who was hopeful of a victory to reward his injured team-mate Kevon Carter (broken leg) who was on hand to witness the clash, then had two other chances to put the match out of Joe Public’s reach but he failed to beat Phillip while substitute Kerry Joseph also wasted an opening.

The missed efforts came back to haunt Defence Force as Mitchell, who was pushed upfield as his team hunted an equaliser, drew his team level with 11 minutes left in the match.

The Defence Force custodian redeemed himself a few minutes later when he tipped over a stinging volley from Noel followed by a close range shot from substitute Yu Hoshide to keep his team in the match.

In the shoot-out, Joe Public got off to the worst possible start as Noel crashed his right footer off the crossbar, however Jorsling dragged his left footed attempt for Defence Force wide of the mark as well.

Andre Toussaint then converted to put the Eastern Lions ahead 1-0 which was preserved when Phillip blocked out Rondell Elcock’s attempt for the Teteron Boys.

Mitchell then scored for Joe Public before Phillip flung himself low to his right to keep out Aklie Edwards third effort for Defence Force for a 2-0 scoreline after three kicks each. Japanese import, Hoshide then stepped and sealed victory for his club with a cool finish to Graham’s left to spark of wild celebrations.

Speaking after the match, an elated Joe Public coach Derek King had lots of praise for his players. “It was a tough week. Having to play the Concacaf Champions League match on Thursday and then come back two days later and put up a gritty performance like that was just fantastic.”

The Joe Public coach who led the team to five titles last season believes the experience of the Champions League played a key role in his team’s triumph. “I think the team has grown this season by competing in the Concacaf tournament,” he said.

Chaguaramas based club Defence Force fired blanks on Friday night in a penalty shootout against Bmobile Joe Public in the Final of the 2010 First Citizens Cup to relinquish the title.

It was a re-match Final at the Marvin Lee Stadium and in the end following a scintillating clash, last season’s runners-up Joe Public lifted the title with a 3-0 penalty win following a 1-1 draw against the 2009 winners.

Joe Public’s Trent Noel was denied by the crossbar in the first kick from the spot however teammates Andre Toussaint, Carlyle Mitchell and Yu Hoshide were on target against Defence Force custodian Kevin Graham.

Meantime the Lions’ goalie Marvin Phillip kept a blank sheet in the kicks from the spot, first seeing Devon Jorsling’s attempt over and making two brilliant saves against Rondell Elcock and Aklie Edwards helping his team to the 3-0 penalty victory.

It was a breath of fresh air for the Joe Public head coach duo Derek King and Ralph Nelson after suffering a 1-0 defeat against the Soldiers last season.

Joe Public, last season’s five-title winners, proved early that they weren’t about to let the First Citizens Cup slip a third season in a row taking the match to Defence Force from the first whistle.

The Lions were inches shy of opening the scores five minutes into the match when Trent Noel’s freekick from 23 yards out clipped the upright and out for a goal-kick after awarded the opportunity following Christon Baptiste’s foul on Andre Toussaint.

And in the 20th minute Carlyle Mitchell headed just overbar from a Hayden Tinto right side corner as Defence Force suffered another scare.

Defence Force responded with an attack in the 23rd minute after Christon Baptiste’s cross from the left was deflected into the path of midfielder Devin Jordan, but his shot was directly at goalkeeper Marvin Phillip who easily wrapped the effort.

But the Lions were at it again in the 25th minute when Antiguan Gayson Gregory made connection to a Toussaint cross and although the effort was a tame one, it forced a desperate save out of Graham who touched it out for a corner.

Five minutes from the break Joe Public defender Jevon Morris showed a bit of ambition from distance with a right footed blast and was just inches too high against the Defence Force crossbar.

Following the break Trent Noel forced a decent save out of Graham who pushed the Joe Public’s midfielder strike from distance in the 52nd minute behind for a corner.

One minute later Joe Public’s goal received a scare when Aklie Edwards’ cross intended to Jorsling had to be cut out brilliantly by defender Keion Goodridge.

Against the run of play—Jorsling gives Army the advantage

Defence Force then broke the deadlock in the 63rd minute for a 1-0 advantage when a long ball forward by substitute Albert Dexter Thornhill set Jorsling free behind the Joe Public and he calmly lofted the bouncing ball over advancing goalkeeper Phillip.

Jorsling then picked up a yellow card from referee Lee Davis for his celebrations after donning a team shirt of injured teammate and friend Kevon Carter who watched on from the crowd bearing crutches.

But in the 79th minute hardworking defender Carlyle Mitchell—who eventually picked up the Man of the Match award—leveled the scores 1-1 with a powerfully struck header off Tinto’s cross from the left to beating a stretched goalkeeper Graham.

Joe Public had the last attempt of regulation time before the match went into kicks from the penalty spot when substitute Yu Hoshide shot on goal was miraculously blocked out by Graham after the Soldiers failed to clear a freekick from Noel.