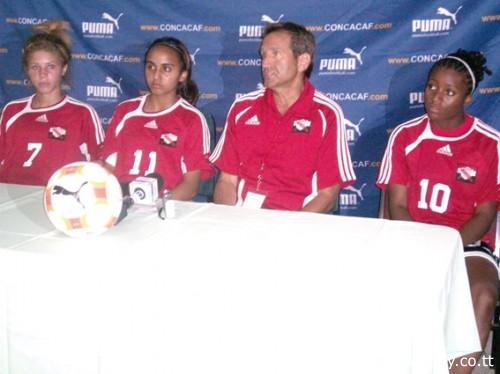 The Trinidad and Tobago Football Association is set to introduce significant changes to the Senior Women’s National Team to better enhance our team’s prospects of being the first Caribbean team to qualify for the FIFA Women’s World Cup.

Earlier this month, the TTFA unveiled plans to send the team to a residential training camp in Houston, Texas for one month in preparation for the upcoming CFU Championship, which the TTFA will host from August 16-27. This move will mark the first time in TTFA history such an investment is being made in the Senior Women’s Program.

On July 6th and 8th, the team will enjoy its first international matches in over 18 months as host to the Venezuela Women’s National Team. Both matches will be played at the Ato Boldon Stadium. Kickoff times will be  6pm on July 6th and 6:30pm on July 8th.

However, the most significant upgrade to the program will come in the form of changing the team’s technical staff.

After one month of program review, concerns raised by players about the direction of the coaching and program, and under the recommendations of a newly installed Technical Development Committee Chairman, the TTFA has decided to relieve Marlon Charles of his present position and install former U.S. U-23 and Notre Dame Coach, Randy Waldrum, as the head coach for the senior women’s team.

It is believed by many in the CONCACAF region that the present Women’s National Team is facing its most promising chance to qualify for the Women’s World Cup, which will be held in Canada in August 2015.

In February of this year, the U-20s came within 30 minutes of qualifying for the U20 Women’s World Cup but lost the match in overtime to Costa Rica 5-2.

Waldrum is expected to be on the bench for the July 6 match vs. Venezuela and will take over the coaching responsibilities upon the team’s arrival in Houston. In addition, as a show of commitment to the women’s game in Trinidad and Tobago, Coach Waldrum has agreed to lead the national team under a gratis arrangement through the CFU Tournament.

In the meantime, Senior Men’s National Team Coach, Stephen Hart, has agreed to prepare the women’s team for the upcoming Venezuela matches and has been conducting the training sessions at the Hasely Crawford Stadium.

The TTFA remains grateful and thanks Marlon Charles for his services to the current Senior Women’s Team.

The 52-year-old Waldrum is a vastly experienced coach in US Women’s Football. He led the Notre Dame Women's Soccer team to two National Championships, in 2004 and 2010.

Waldrum was named as the first head coach for the NWSL expansion team the Houston Dash ahead of the 2014 season.

He is no stranger to T&T women’s football, having coached the Women’s Under 17 team during the CONCACAF Final Round of World Cup qualification in 2008.

Waldrum also served as an assistant coach with the U.S. Women's U-18 and U-20 national teams in the late 1990s. He started a first-year men's program at Texas Wesleyan in 1988 and earlier had his first collegiate head coaching position at Austin College in 1982.

He served as director of coaching for the Texas Longhorns Soccer Club from 1987-89, coaching one of the seven teams in the club while overseeing the other teams. His team went 53-4-1 and finished third in the country, with Waldrum coaching and developing two Parade All-Americans, two national team players and one Youth World Cup player with the Longhorns.

Waldrum earned all-district honors all four years of his playing career at Midwestern State University in Wichita Falls, Texas, graduating in 1981 as a physical education major and political science minor. He then played professionally for the Los Angeles Skyhawks and the Indianapolis Daredevils of the American Soccer League.

Trinidad and Tobago national senior women’s team Marlon Charles was officially sacked today by the Trinidad and Tobago Football Association (TTFA), just one month before the inaugural 2014 Women’s Caribbean Cup tournament, which will be staged in Trinidad between August 19 and 26.

The 58-year-old Charles, according to a TTFA release, will be replaced by 52-year-old United States-born coach Randy Waldrum, who is the present coach of US National Women’s Soccer League (NWSL) team Houston Dash, a two-time NCAA winner with the Notre Dame women’s team and a former Trinidad and Tobago national under-17 coach.

The release, which was authorised by general secretary Sheldon Phillips, might come as a surprise to Charles, since he was due to meet TTFA president Raymond Tim Kee, technical development committee chairman Richard Quan Chan and Phillips at a meeting from 4.30 pm tomorrow at the local football headquarters.

Phillips confirmed to Wired868 that the TTFA would discuss various issues with Charles, who offered his resignation to Quan Chan last Friday and has not led the team since. National men’s coach Stephen Hart trained the women on Monday evening and today and is likely to be asked to do so again on Friday.

“The meeting tomorrow will iron everything out,” Phillips told Wired868. “We don’t have a definitive reason as to why (Charles) left… Part of the problem is you hear information second-hand.

“We want to have everyone in one room to hear exactly what the problem is.”

Phillips refused to confirm, then, that Waldrum was already retained as head coach.

Exactly one hour after the general secretary spoke to Wired868, the TTFA issued a release that suggested Charles had been axed due to a player uprising against him.

“After one month of program review, concerns raised by players about the direction of the coaching and program,” stated the TTFA release, “and under the recommendations of a newly installed Technical Development Committee Chairman, the TTFA has decided to relieve Marlon Charles of his present position and install former US U-23 and Notre Dame Coach, Randy Waldrum, as the head coach for the senior women’s team.”

Ironically, Charles’ cited a perceived lack of courtesy and respect from the local football body as his reason for quitting in the first place.

Charles has been a national women’s coach for the past 19 years and spent much of that time as assistant to Jamaal Shabazz and Norwegian Even Pellerud while he also worked under Waldrum when during an unsuccessful Under-17 CONCACAF qualifying campaign in 2008.

Charles insisted that he had no problem with serving as deputy again; but claimed he only found out about the team’s proposed Houston camp through the media, just over a week ago. He said it was only he voiced his concern about this that he was told about Waldrum’s pending appointment.

Phillips countered that Charles was always kept in the loop.

“Marlon has been informed every step of the way,” said Phillips “He was informed about the camp. And this was after we had preliminary discussions with him to tell him about our change of direction with coaching…

“He said he had no problem working with Randy as an assistant.”

But Charles insisted that Phillips was not being truthful and suggested that the TTFA release further confirmed his concerns about what was happening.

“I am happy with the stance I took and I stand firm on my decision,” said Charles, who is a school teacher at the Chaguanas South Secondary. “The first time I met with Sheldon (earlier this year), I asked ‘whatever decision you are going to make on technical matters related to the team, to let me know.’ But they never let me know what was happening and I did not know about the camp until I saw it in the papers.

“So I stood on principle. I am calm about my decision.”

Phillips did not say why he decided to tell the public that the women’s team did not want to be coached by Charles.

Some players, who spoke to Wired868 anonymously, said they were anxious to see an improvement in the national programme since the senior women’s team now has its best chance of advancing to a World Cup finals since Canada’s role as host opened up an additional qualifying spot.

They felt a more experienced coach could be a boon although it was far from unanimous that the team could not qualify under Charles.

Charles refused to be drawn on his employer’s claim that he was not wanted by his squad. However, he hinted that the players might be more interested in benefits like training camps and international practice games, which tends to happen when a foreign coach is in charge as opposed to a local one.

“I know these players for a long time and because of the struggles within the women’s set up there will always be issues,” said Charles. “I just want to wish the players and the team all the best for the tournament.

“Once they think about the team and not egos I know they will do very well.”

The coaching staff of the national women’s teams has not received a monthly stipend since former special advisor Jack Warner quit in 2010 while the coaches do not receive match fees for international games either. Instead, they were promised stipends of $160 (US$25) per day during competitions, which they have not received either.

Former TTFA technical director Anton Corneal revealed that the national under-20 women were forced to stay in their hotel on off days during CONCACAF competition, earlier this year, due to a lack of funds and looked on as players from opposing teams left to shop or go on tours.

The senior men’s “Soca Warriors” also did not receive a per diem during their week-long South America tour last week.

Phillips claimed, though, that Waldrum has agreed to work for the TTFA for free.

“Because of the funding issues, (Waldrum) decided he would come in and lead the team throughout the CFU tournament gratis,” said Phillips. “He sees this as an opportunity or challenge to guide the first Caribbean team into the World Cup and his relationship with college coaches should make it easier for him to get players.

“He has a tremendous amount of knowledge and experience and the players who played for him very much love him as a coach and a person. I think he has very similar dynamics to Stephen Hart.”

Waldrum will now lead the national women into international friendlies against Venezuela on July 6 and 8 at the Ato Boldon Stadium in Couva from 6 pm and 6.30 pm respectively.

Charles agreed with the TTFA’s warm assessment of Waldrum, who was initially brought to Trinidad by Phillips’ father and ex-TTFA technical director Lincoln “Tiger” Phillips.

“I worked with him already and he is a good person and he can coach,” said Charles. “I have no problem with that; but it is the way things are done. That is what is really hurting me.

“I grew up under certain core values and I just cannot accept people treating me like this.”