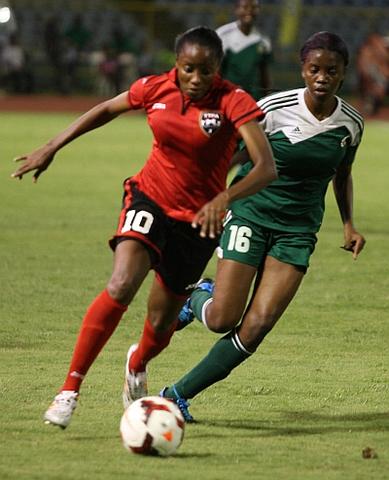 T&T Women won their second consecutive game at the 2014 Women’s Caribbean Cup when they defeated Antigua & Barbuda 3-0 at the Hasely Crawford Stadium.

Both Trinidad and Tobago and Martinique have joined Jamaica and Haiti as the Caribbean’s four qualifiers for the 2014 CONCACAF Women’s Championship, where they will battle world champions United States, Mexico, Costa Rica and Guatemala from October 16-25, for three automatic qualifying spots to the 2015 FIFA Women’s World Cup to be held in Canada.

A fourth CONCACAF team can qualify for the World Cup via a playoff with a third-placed South American team, while a fifth team, Canada get in as hosts.

Leading just 1-0 at half time, T&T showed great second half ball movement and the patience to probe determinedly defensive opponents. Shade twice scored from crosses to the back post, squeezing in a downward first-half header from Karen Forbes’ cross in the 35th minute, and a low shot to a similar cross from American-born left-back Lauren Hutchinson in the 53rd. Shade also hit the base of the post when connecting with another back post cross from Forbes, before Tasha St Louis put in a superb third goal in the 64th minute.

Scorer of four goals against St Kitts-Nevis, St Louis collected with her left foot before instantaneously pocketing a low shot to the corner of the net with her right, from the edge of the penalty area.

The Soca Princesses had to break down a yellow defensive wall set up by Rowan Issac, Antigua and Barbuda’s technical director, who saw it as a “victory” that his bright yellow-clad footballers had not conceded 10 goals, similar to St Kitts-Nevis.

“I think it was absolutely brilliant. I think we had our strategy right on par. The players worked their socks off and they were absolutely magnificent in the game,” Issac said of Antigua’s defensive effort. “You have to respect the opponent. You have to face the reality when the opponent (T&T) is much better than you.”

Despite playing unbeaten and winning against St Vincent & the Grenadines, Aruba and US Virgin Island in an earlier Caribbean Cup round, Issac recognised T&T as a major step up for his team. The strategy was to allow the “Trinidadians to play all day” with the ball if necessary, not chase the ball aimlessly, and defending wholeheartedly in the Antiguan half.

“Look at the (T&T) match against St Kitts. They were chasing, chasing, chasing and at the half they were (down) 7-0, no respect. You have to respect the good teams,” Issac added.

In order to give a good account of themselves, Issac said Antigua and Barbuda needed to show defensive discipline and team organisation. He spoke glowingly of the T&T players as having technically, tactically superior players, with great awareness and football skill.

“Can’t take anything away from Trinidad. Words can’t explain.....they are a good team. So, I came in and I showed them the respect they deserved,” Issac said.

T&T’s American coach Randy Waldrum said Antigua-Barbuda provided a different test, which his players passed well, after a few second half adjustments were made.

“We played a team like St Kitts who wanted to play, so the game and so the space opened up,” Waldrum said. “Right from the kick off you saw Antigua wanting to bunker in, keep the score down, and maybe get a counter attack. I think they crossed the half once.”