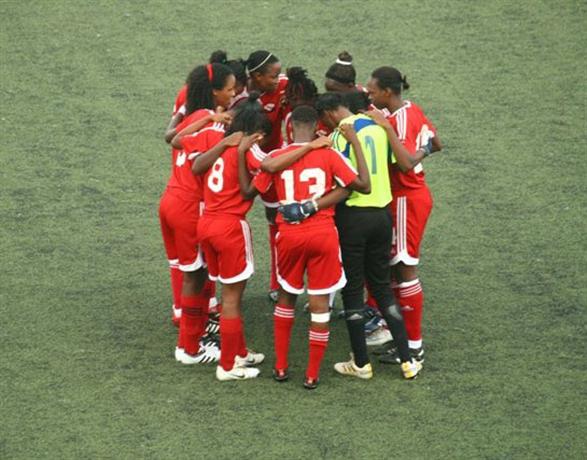 Trinidad and Tobago Women's Senior team opened it's 2016 Olympic qualifying play-off match against St Lucia with an emphatic 6-0 victory over their Caribbean neighbours at the Ato Boldon Stadium, Couva, yesterday.

The Lady Warriors captain Tasha St Louis, who, recently got married, celebrated her honeymoon in fine-style when she registered a double brace, while former Swedish-based winger Ahkeela Mollon got the remaining two.

The team is being coached by former Northampton Laurels and Notre Dame High School head coach, Anthony Greece. Formerly of Port of Spain, Greece played locally for both Mucurapo and Fatima before moving on to play at East Stroudsburg University, where he was named College Soccer Athlete of the Year in 1993. The former Philadelphia Freedom defender also represented Trinidad & Tobago at the U-19 and U-23 levels.

Meanwhile, both teams will meet again in Couva on Sunday from 6pm. The Reggae Girls awaits the winner of this two-legged series, a match up scheduled for next Wednesday at the same venue from 7:30pm.

TASHA ST LOUIS netted a beaver-trick while Ahkeela Mollon scored a double on Friday as Trinidad and Tobago women football team began their campaign for a place in the 2016 Olympic Games in Rio de Janeiro, Brazil with a 6-0 mauling of St Lucia in the first game of their Caribbean Football Union (CFU) First Round Group Two Qualifier at the Ato Boldon Stadium, Couva.

Both teams will square off again Sunday at the Couva venue from 6pm, with the winner advancing to the CFU Final Round, which will also be staged at the Ato Boldon Stadium on November 18 and 20.

Mollon got things going in the. second minute for the national. women’s team — playing their first international match at home since the ill-fated 1-0 loss to Ecuador on December 2 2014, while St Louis, playing a week after her marriage to Morvant Caledonia United defender Kareem Joseph, got her name on the scoresheet in the tenth.

After a few missed opportunities, Trinidad and Tobago netted their third in the 32nd, as midfielder Janine Francois sent Mollon clear on the right, with a neatly- placed diagonal pass.

Mollon, with two defenders closing her down, sent the ball into the six-yard box where St. Louis was on hand to bundle her shot beyond the reach of goalkeeper Namaly Flood.

The veteran attacker completed her hat-trick five minutes later — collecting a through-ball from Victoria Swift, she broke the off-side trap, got around a timid Flood and slotted her left-footed. shot into the open net.

St Louis could have extended her tally in the 41st, but she struck. her penalty against the crossbar, with the ball trickling along the goalline to add to her agony.

However, St Louis netted her fourth item in the 57th, again going around Flood and hitting a low left-footer after defender Nicia Octave was caught in possession by midfielder Naomie Guerra.

Mollon completed the rout. in the 65th, with Octave losing out to her on the flank and Mollon came in from the right and slipped the ball to the left of a flat-footed Flood.

The Group Two matches were originally slated for August 21-25 in St Lucia, but were delayed due to the passage of Tropical Storm Erika.

Antigua/Barbuda and the Cayman Islands withdrew and the matches were then rescheduled to a two-leg contest in Trinidad.