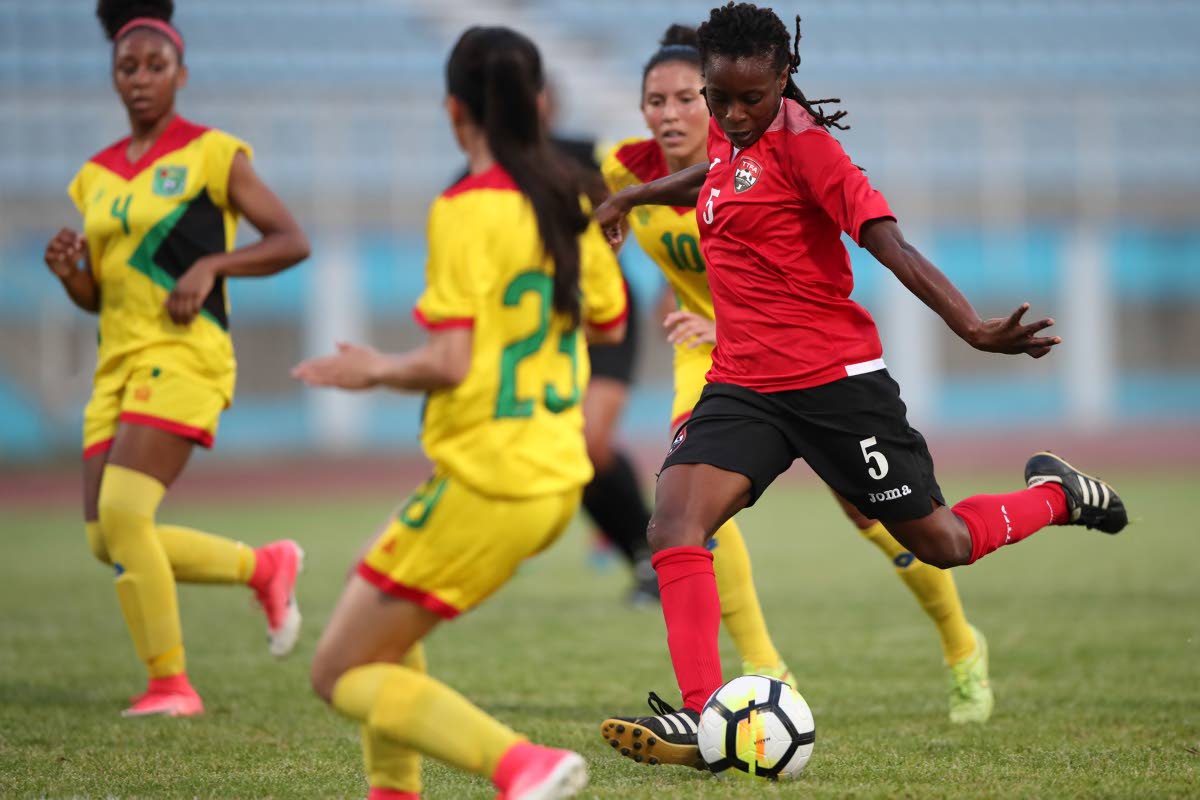 Trinidad and Tobago’s Senior Women topped Group E of the Caribbean Football Union (CFU) Women’s Challenge Series when they recorded their third consecutive win with a 3-1 victory over Guyana at the Ato Boldon Stadium on Sunday evening.

T&T got goals from Shanieka Paul in the 12th, Kayrn Forbes in the 75th and Jonelle Cato in the 88th. Suriname edged Grenada 6-5 in the earlier encounter to finish second in the group with four points ahead of Guyana (2pts) and Grenada (1pt).

T&T took the lead when Paul forced her way into a good shooting position atop the penalty box and hit a well placed shot into the net. T&T were not as dominant in their previous two outings as Guyana were disciplined for most parts and made a committed attempt to stay organized. They would find the equalizer in the 63rd minute through a penalty by Mariam El-Masri after a hand ball offense by T&T.

Guyana would however gift the second goal to the hosts when Canadian-born goalkeeper Aneesa O’Brien dropped a right side cross and Forbes was on spot to slot home for a 2-1 lead.

Cato would then take her time to chest down a loose ball way out on the right  before swinging goalwards to see the ball go through O’Brien and into the goal for T&T’s third item.

T&T head coach Jamaal Shabazz later expressed satisfaction with the team’s progress ahead of next month’s CONCACAF Caribbean round of 2019 World Cup qualifiers.

“After the hardships comes the ease. The women’s programme has has some tremendous hardships and it is good that we can win today and feel some ease.  We feel good that in a long time we’ve not played in a tournament and now be able to come out victorious at home,” Shabazz said.

“They did well, they worked hard. Guyana played a smart game. They gave us room to play in front, they denied the room behind them. They gave respect to us and not try to press but then chose good moments to press. All in all we played against a sensible opponent and I thought our ladies handled it well as well,” he added.

“Lots of good (we can take from this). We were able to score goals. We are smelling again like the team that can be a top team in the Caribbean. It’s been a long time, maybe since 2014 that we could say we are a top team in the Caribbean. Now that feeling is coming again. The girls are much  more confident but we still have a lot more work to do in terms of being able to go forward and establish dominance.”

T&T's Soca Princesses pulled off a hard-fought 3-1 victory over Guyana in the final game of the Caribbean Football Union (CFU) Women's Challenge Series at the Ato Boldon Stadium in Couva, last night.

The Guyanese who drew their first two matches against Grenada 0-0, and Suriname 2-2, sought to solidify its defence in the opening moments, but it worked until Aaliyah Prince weaved her way past two defenders from on top of the area and the ball rolled invitingly for Shenieka Paul to fire past goalkeeper Aneesa O'Brien in the 12th minute.

T&T, playing its best game of the tournament, kept ball possession for long periods, but struggled to get past a defence made steady by an increase in numbers. Coach Jamaal Shabazz decision to push defender Liana Hinds and Karyn Forbes into more attacking positions did create the chances, which saw Shanelle Arjoon twice striking the crossbar and Forbes' long-range attempt also crashing off the bar earlier.

Later Arjoon, exchanging passes with Prince in a neat build-up ended with Arjoon shooting wide of the post before the half-time interval which the host took a slim 1-0 advantage into the dressing room.

After the break, the Guyanese got the equalizer when Naomi Guerra handled the ball in the area from Jinelle Cato's pass in the 63rd minute and Mariam El Masri beat goalkeeper Nicolette Craig with the spot-kick.

But T&T regained the lead and control of the contest when Cato stormed down the right flank and her shot slipped through the grasp of O'Brien in the 75th minute and Forbes was on spot to fire into an empty net.

Moments later, Prince missed out on a golden opportunity to push her team further ahead when Kedie Johnson pick her out with a left side cross, but the pint-size striker failed to convert.

Guyana problems deepened when the team was reduced to 10 players after El Masri was sent off for her second bookable offence in the 85th minute.

The host wasted no time and capitalised on its strength in numbers when Cato long-range shot from the right side again went through the hands of the goalkeeper and into the goal for a comfortable 3-1 win in the end.

T&T was later adjudged winner of the tournament after winning all three matches which included (Suriname 7-0; Grenada 8-1), while Suriname finished second, Guyana third and Grenada fourth.

In the first match of the night's double-header programme, Suriname got the better of Grenada in a high-scoring affair that ended 6-5.

T&T's Forbes and Arjoon finished as joint top-scores with four goals each.