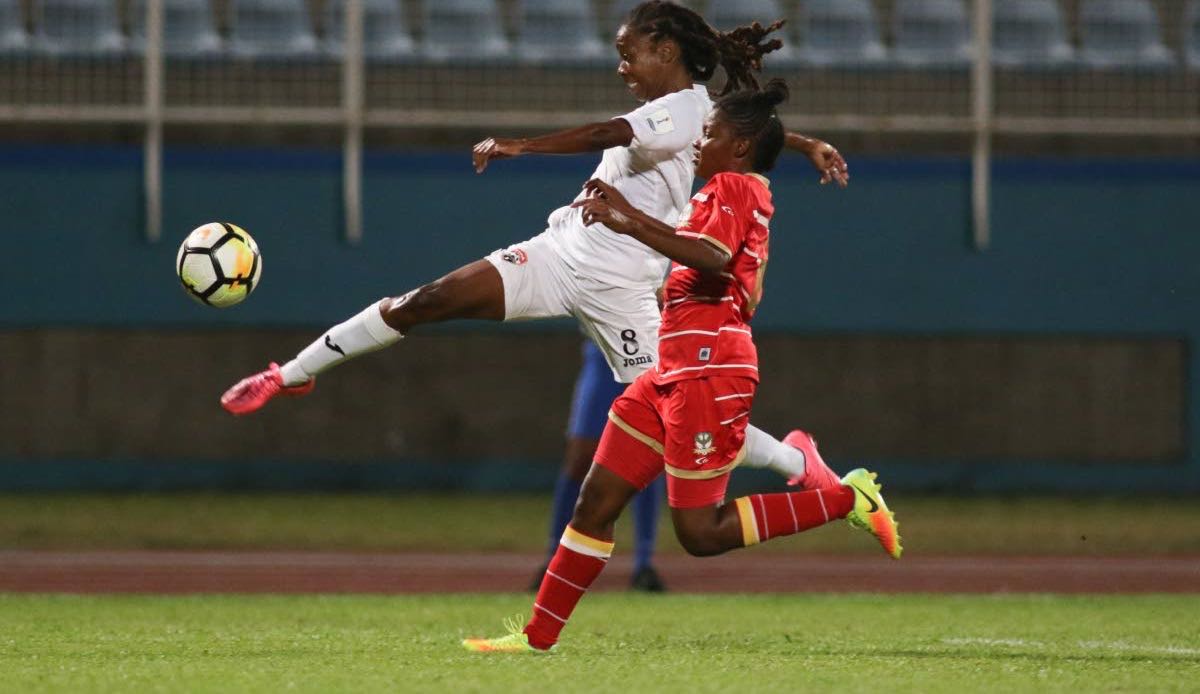 T&T and St Kitts/Nevis shared the points from a 1-1 tied in a hotly contested Concacaf Caribbean Women's Qualifying encounter at the Ato Boldon Stadium in Couva last night.

But the hosts had to come from a goal down to earn a hard-fought point in a match that they should have won by a wide margin.

St Kitts/Nevis got off to a flying start when defender Ayanna Russell handled the ball in the area in the first minute, and captain Phoenetia Browne stepped up to beat T&T's goalkeeper Saundra Baron from the spot.

The host had numerous opportunities to get the equaliser but failed to get the ball in the net.

Shade got a clear-cut chance when Patrice picked her out in the 28th minute Shade's attempt sailed over the crossbar. And later a neat build-up between Tasha St Louis and Janine Francois ended up at the feet of Jenelle Cunningham, but the defender's shot was pushed wide by Kyra Dickinson in the 32nd.

A minute later St Louis was put through but she shot straight to the outstretched legs of Dickinson.

After the break, St Louis has again gifted a chance at goal when Francois threaded one for her, but with the goal at her mercy, she again shot straight to the goalie.

But the skipper made amends when she curled one in from a free kick on the left side to level the scores in the 80th minute. T&T continued to attack and went for goal when Aaliyah Prince passed to Shade, whose attempt on goal was miraculously headed onto the crossbar before going out.

Both teams will now decide which team will advance from tomorrow's programme. T&T plays Grenada in the feature match at 6.30 pm and need to score as many goals as it can, while St Kitts will play the US Virgin Islands and they also need to score heavy to give their team a chance of qualifying out of the group. Only one team will advance to the next stage.

TRINIDAD and Tobago’s chances of advancing to the 2019 FIFA Women’s World Cup in France are still alive but under threat, after battling to a 1-1 draw against a combative St Kitts/Nevis in their 2018 CONCACAF Women’s Championship Qualification Group C top-of-the-table encounter.

In front of an estimated crowd of 1,000 at the Ato Boldon Stadium in Couva, St Kitts captain Phoenetia Browne’s second minute penalty for the Earl Jones-coached outfit was cancelled out by a brilliant free-kick from T&T’s skipper Tasha St Louis in the 79th. The result leaves T&T (with a plus 13 goal difference) and St Kitts/Nevis (with a plus 11 goal difference) both on seven points from three matches with two wins and a draw.

It may well come down to goal difference to determine the group winners, who will then progress to the CONCACAF Women’s Championship Qualification Final Round scheduled for late August.

St Kitts/Nevis will tackle the United States Virgin Islands tomorrow from 4 pm followed by the T&T vs Grenada contest at 6.30 pm.

Browne silenced the home fans with her early penalty which was awarded for a handle-ball infringement by defender Rhea Belgrave. T&T, in the space of a minute, then spurned two good opportunities to equalise.

Janine Francois, unmarked in the penalty box, elected to pass to Patrice Superville instead of shooting to goal, and Superville’s effort was blocked by goalkeeper Kyra Dickinson in the 33rd. Dickinson was called into action a minute later to block Mariah Shade’s left-footed effort.

It was one-way traffic in the second half, but St Kitts/Nevis proved a tough nut to crack, with Dickinson producing an impressive display.

She came off her line to block St Louis, who was sent on goal by Shade, in the 56th. When she was not saving efforts, the crossbar came to her rescue as Karyn Forbes’ long-range try from the left hit the uprights in the 62 nd.

St Louis came to T&T’s rescue with a free-kick, which was pushed into the net by Dickinson’s right-hand, after a foul on Forbes by midfielder Leranja Wilkinson.

And in the last minute, Shade met Prince’s right-sided cross from two yards out but her header smashed off the crossbar and stayed in play.

Earlier on the day, Dominica and Grenada – both out of contention for a spot in the Final Round – battled to a 1-1 draw.

Dominica opened the scoring through Romeicia Phillip after 29 minutes before Monique George replied for the Grenadians in the 64th.