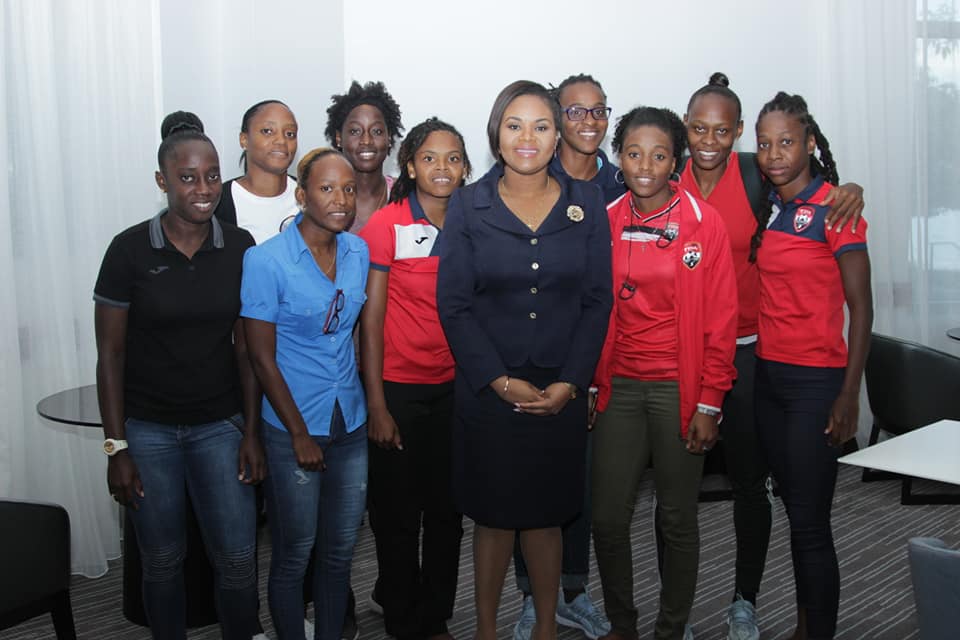 The Honourable Shamfa Cudjoe, Minister of Sport and Youth Affairs, along with senior officials of the Ministry, met today with Mr. David John-Williams, President of the Trinidad and Tobago Football Association (TTFA) and other members of the TTFA at the Ministry’s Head Office, St. Clair Avenue, Port of Spain.

As highlighted in a Media Release issued by the Ministry last Friday, TTFA was given a deadline of Monday, September 17, 2018 to submit a formal funding request towards the support of the Women’s Football Team and their preparations for the World Cup Qualifiers. The TTFA met yesterday’s deadline and discussions were held this morning to determine how assistance could be provided.

Yesterday, following a request made by the locally based members of the team, Minister Cudjoe met with the women’s national football team to gain further insight into their plight.  The Minister was informed about the many challenges faced by the players, including the matter of outstanding retainer fees owed to the players by the TTFA.

With fifteen (15) days left before the commencement of the Women’s World Cup Qualifiers Final Stage, the Ministry has reviewed the proposal submitted by the TTFA and has agreed to provide 100% of the amount requested, in the sum of Four Hundred and Thirty Thousand Dollars (TT$430,000). This financial assistance is intended to cover the costs of airfare, hotel accommodation, food and beverage, pre-training camp, medical and baggage fees, and other items, for the team and the technical support staff.

Minister Cudjoe also used the opportunity to highlight the concerns raised by the members of the team, especially as it relates to the outstanding retainer fees owed to the members by the TTFA. In response, The TTFA has committed to pay retainers fees to the players before their departure on September 25, 2018.

The TTFA will be invited to sign a Service Level Agreement (SLA) to ensure funds are properly disbursed and utilized.

Minister Cudjoe stated that “the welfare of these players if of paramount importance to the Government and people of Trinidad and Tobago. They are our flag bearers and we have a duty to ensure that they are treated with dignity, compassion and respect. It is in this light, that the Ministry extends the necessary support.” She further stated that “this national embarrassment could have been avoided, and must never be allowed to happen again.”

Minister Cudjoe reminded the TTFA of the importance of proper planning, management, and leadership in the execution of its affairs, and further encouraged the TTFA to comply with the Ministry’s guidelines regarding the timely submission of financials, proposals, calendars and other relevant documents.

The Ministry of Sport and Youth Affairs stands committed to supporting NGBs to ensure that the sporting industry is developed at the highest standard and maintains transparency, accountability and impartiality as core values of the Ministry.