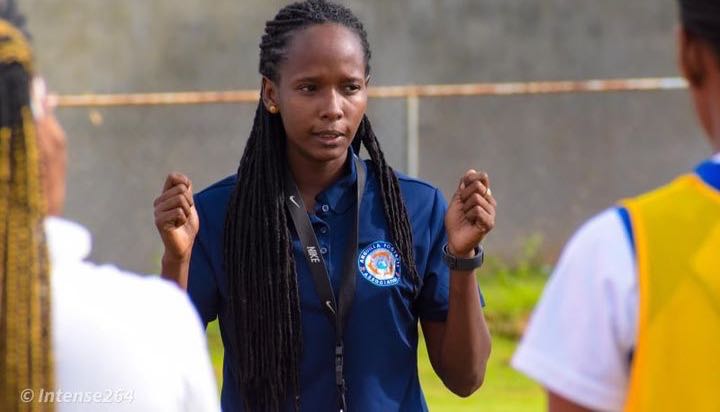 In October of this year Stern John was named Anguilla Men’s National Senior Team head coach after a successful stint with the Trinidad and Tobago Men’s National Under-17 Team in March 2019, however, due to financial difficulties with the Trinidad and Tobago Football Association (TTFA), both Stern John and Ahkeela Mollon was left with no choice but to seek employment outside of the twin-island republic.

On November 01st, Mollon, was named Anguilla Director for women's development. Mollon will also coach that country's national team as well, however, due to COVID-19 restrictions and the limited flights out of T&T, both John and Mollon had to wait a little and only arrived on the Island on November 22nd to take up their new coaching and development responsibilities.

Molon is on a long term contract and her main responsibilities are to develop an overall program for the holistic growth and development of women's football in Anguilla. From grassroots to seniors. All other coaches working with the women's team will fall mainly under her scope and philosophy.

Soca Warriors Online (SWO) would like to wish the former Kvarnsvedens IK star best wishes on her new job as well as Stern John.

She was appointed on a long-term contract, beginning November 1, with responsibility for developing the women's game from junior to senior levels. Her duties include continuous training of the country's Under-15, u-17, u-20 and Senior team, but Mollon told Guardian Media Sports on Monday she also started an Elite Programme which will be a feeder programme to the national teams.

At 36, Mollon who has represented T&T from the junior to senior level said she sees this opportunity as one to do what she always wanted to do and that is to develop the women's game locally and regionally, saying for the past six years she has worked with boys teams mostly.

Her task is not limited to players only as she also has the responsibility to impart her knowledge and experience to budding coaches of the women's game there.

Mollon now joins another T&T professional Stern John, a former national striker who leads the T&T all-time goal-scoring chart who was appointed coach of Anguilla's Senior Men's team. "This is my first major job outside of T&T and it will begin a process by which I intend to live my dream of impacting women's football in the Caribbean," Mollon said.

She lauded the Anguillan Football Association for opting to recruit professionals from T&T and the Caribbean, noting that they easily could have gone for a technical director from the United States or Europe, but saw it necessary appoint her.

Mollon has had an impressive career dating back to her early years at Holy Faith Convent in Couva in 2004, where she progressed to the national teams and also played in the United States, Iceland and Sweden for Charlotte Lady Eagles (USA - 2008), Kvarnsvedens IK (Sweden- 2009), Djurgården Idrottsförening Fotbollsförening (Sweden- 2010), Stjarnan Women's Football team (Iceland- 2011), Afturelding (Iceland- 2011), and Kvarnsvedens IK (Sweden- 2014) for a second time.

Yesterday, however, it was a bitter-sweet moment for Mollon who said she would have loved to have been given the same opportunity in her homeland, saying: "I have played for T&T for 19 years and have played in Europe etc, but have never been recognized for my contribution. You know, sometimes your own country doesn't recognize you for the work you do but other countries do."

So far, she has been living her best life, doing what she loves to do the most while gaining the support by all on the island. Mollon promises to not follow in the footsteps of the T&T trend by beginning to train teams only months ahead of tournaments, saying "This is what they hired me for, to have continuous training and preparation of the teams for competition."