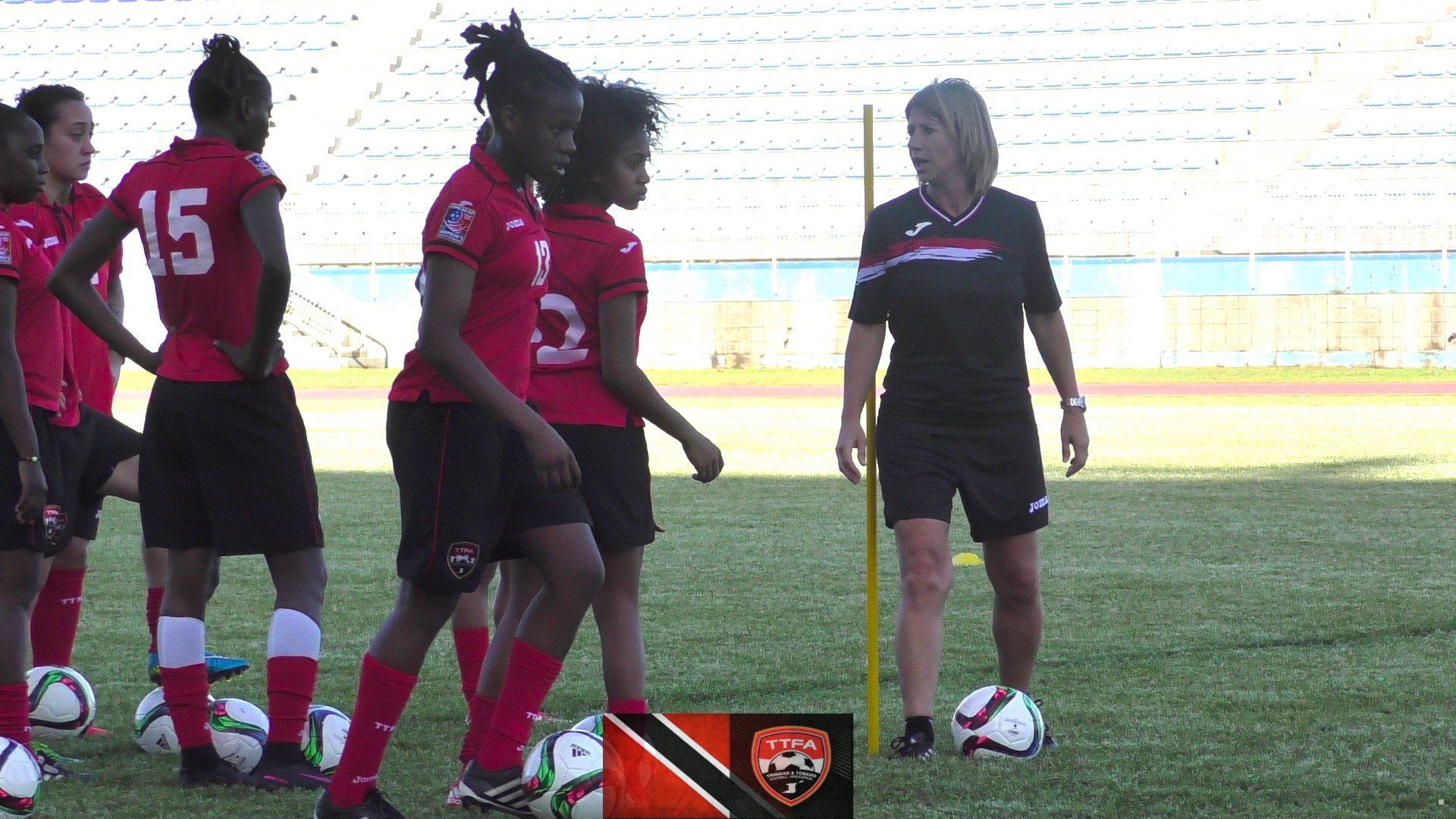 Taking the Warriors out of TT football

If it was a prison in Canada, it is slavery in Trinidad conducted by a  woman who was imported- along with her dog and cat- into this Banana Republic where she is being treated like a Tin God.

Deservedly so, based on her impressive resume and brilliant football mind, Carolina Morace is a long overdue gift to the Women Warriors.

Sadly, the Italian Hall of Famer was  never fully investigated before she was hired by the Trinidad and Tobago Football Association (TTFA). Her last stint as a national coach was in 2012 in Canada where she left  football scars caused by an “aggressive Italian regime” which turned  that country’s World Cup adventure into a “micro managing prison camp,” according to a report in the Toronto Sun.

After just eight weeks  in T&T, her impressive resume is a distant memory as her new found reputation, from all reports, includes “verbal abuse”, “disrespect” and “nightmare” as the newly appointed Technical Director of Women’s Football tries to get a grip on her first Third World assignment.

Yes, she insists all is good in her camp.

Why did she settle for  coaching T&T, not even considered a CONCACAF powerhouse? That’s a question which only Morace can answer.

Three  cornerstones of the current Women's football have walked away, hanging up their boots. Though fit and match ready they are broken hearted.

The trio, captain Maylee Attin Johnson, Ahkeela Mollon and Kennya Cordner, in their respective rights are leaders who fought with their lives  as part of the history making Women Warriors team that united T&T  in 2015, setting the foundation for Morace’s appointment in Trinidad.

Already attempts are being made to smear their characters in favor of the Italian whom, informed sources say, seems to be creating alliances in Trinidad and Tobago to impose her own culture.

What role is there for the VP of the TTFA, Joanne Salazar, to whom Morace has aligned herself, in a move which is transparent to the players.

Therefore, is Morace's relationship  with the TTFA evolving  in a way that she does not want her coaching to interfered with? Everybody is beginning to ‘fraid Morace,” as she has them all believing that they are less-than-professional.

Among the first to be sidelined, unofficially, of course, is  the TTFA’s Coordinator of Technical Programmes Jamaal Shabazz, who shut down the discussion when I called him.

“We have a working relationship, I do what is necessary to get the job done. I do not have to interact with her a great deal, but I do go to watch the players,” Shabazz  deadpanned  refusing to acknowledge that Morace clearly does not speak with him and there is obvious tension when they relate.

But has he heard of complaints from both staff and players?

“It is not my jurisdiction,” he answered, adding “I don’t fit into the equation.

“I read  about what transpired and it is unfortunate that the situation has reached to that,” he said, refusing further questions.

“There is time for the matter to be resolved, I trust that the Technical Director, Muhammed Isa, will get a total feedback and I will know what happened eventually,” Shabazz ended.

The main bone of contention, at this time, is Captain Maylee, described as a woman with strong opinions  but all in the interest of the team and the program and  one who has fought with her life.

Highly respected by her team mates, Maylee clearly sets her  standards for  respect. Attin Johnson untied her laces obviously walking away from further confrontation which seemed imminent given Morace’s blunt and demoralizing disrespect.

Football trumps all. By the time Morace started her stint in Trinidad, all the Women Warriors were lining up to give up two and half years of their life for the experience, not knowing what they signed up for.

Described by those who know as a woman with a “tendency to  burn her bridges,” Morace’s most often used  phrase in training at the Mannie Ramjohn Stadium has been “This is sheet,” the last word being her pronunciation of “shit”.

With that, in a few weeks all Trinbagonians- players and staff - are thinking that she has turned her back on her declaration at a news conference in Port of Spain “We are more open. What we want to do is put our experience into place but at the same time we have to match with your culture .For a good system the two  cultures  have to match”.

This is how it is being dismantled; The core of the  Women Warriors team are players who have been through the US College system. Almost all college based players were home for the Christmas holidays and returned  stateside in mid January.

Not having played a game since November, they were summoned  back a couple of weeks after they returned, at great expense ,to the TTFA, for a one week assessment by Morace.

“She did not even put them into a game situation, but had them do simple drills and passes and summed it all up as “sheet,” another source explained, sad about how demoralized the girls seemed after their encounter with the Italian. “The College players were told their technique is bad - they were not fit enough to be on a National team.

“Khadidra Debisette, who has played at the national level for several years- left a meeting literally crying,” returning to the US with the hopes of once again playing for the national team dashed.

"In front of everyone, she declared that the College system is crap, telling them they would be worse off as players.“

Is it professional to be disrespectful? “She has all the knowledge but is a dictator,” my source explained.

“Next to go was Ahkeela Mollon who was fit and ready and  turning a blind eye to the negative criticism that became a hallmark of training sessions on the field from 6pm to 8pm, after which the players stretched and had ice baths where necessary, before leaving for home in various parts of Trinidad.

“Thinking of her safety, Mollon who lives in Longdenville, on the border line with  Enterprise  asked  her Manager for the ice baths to be taken at home,” my source said.

“The Coach responded with a loud comment across the field ‘ Why do they even come out of their houses?” mocking the  clear and present danger posed by crime.

“One day later two men were shot and killed a  stone’s throw from Mollon’s home. One year earlier she ducked gunshots as she made her way home from training.

Morace, incidentally, lives in South Trinidad- not far from where her team trains at the Mannie Ramjohn Stadium which is the base for the women football programme.

“She came here to be a mentor, but now  the players are clearly suffering, players  are low on self esteem, they need  help.

‘She walks around the field and pinches people, telling them they’re too fat,” my source said.

The women who have been exposed to international coaches and training in the US and in Europe  have never experienced someone like the Italian, whom they say is “running amok” with no one to control her.

For the sake of professionalism, this woman who signed up to work in a Third World country, handed it to the TTFA again, when she showed up in Tobago  earlier this month to try out players for the National Team.

“The field was not marked and she left the 40 innocent players stranded as she made an about turn with her technical staff and returned to Trinidad.

‘It is commendable  that she stood up for professionalism, holding up the bar for the TTFA, but was there another way to go about it?

“There is no indication that she  truly cares about reform and pointing in the right direction.

“There are some girls in training who do not have food, or even a roof over their heads, the players work with each other to make it to training  and it’s  far worse than boot camp,” my source added.

“If indeed it is all that bad in Trinidad, where even the coaches are “sheet”, I feel sorry for her, after all,” a veteran T&T footballer said, weighing in on the discussion.

“Because of her resume she is obviously coaching down, this was not a lateral move, so it begs the question: What did the TTFA offer her?

“There are cases where women coaches believe they must behave worse than men in order to get the job done,.

“But you don’t get respect by shouting down people. You must treat people like people.

‘It is clear she left Canada with a bad taste  and remember most Canadians came out of the  US College system,” he added.

“These girls here are not  gonna learn to play the short passing, that is not our style and we cannot even  get the men to play that way,” he noted.

“Morace is yet to show that she can merge the cultures, because clearly she has no respect for our culture,” he ended, with a sigh.

What appeared to be one step forward for women’s football in T&T is turning out to be another nightmare.

Especially for the footballers who grabbed at the opportunity having been left unattended since 2014, until Morace appeared.

It appears that TTFA President David John-Williams  was so eager and enthusiastic to make a statement because of the pressure he was getting for his leadership, he wanted a high profile coach.

They clearly did not take time to get someone to come in and understand the culture. Just as the Toronto Sun reported, she worked on taking the Canadian out of  Canada’s team, so too, she is well on her way to removing all warriors from the T&T’s women football.