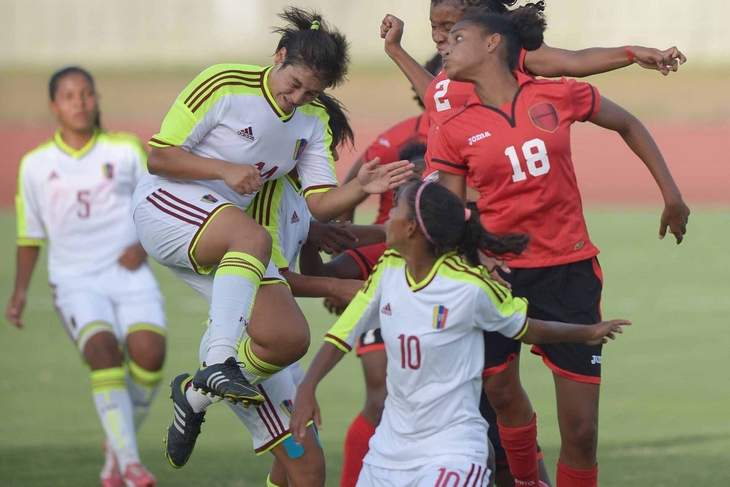 Three set-piece goals prevented the Trinidad and Tobago Under-17 women from capping off a festive day with a winning performance yesterday, as they slumped to a 3-1 defeat to Venezuela after taking an early lead at the Manny Ramjohn Stadium in Marabella.

A girls' football clinic featuring several schools across the nation was held earlier on in the afternoon, however the match was the main attraction yesterday as it was held to celebrate CONCACAF Women's Day.The U-17 team are currently preparing for the qualifiers for the Women's U-17 World Cup in Jordan next year, and were eager to entertain the home fans.The match itself was entertaining and adventurous, with both teams unafraid to take the initiative and press forward. Venezuela threatened the T&T defence in the early stages, almost scoring from a corner in the seventh minute. Their forward Wilykary Camacho, was denied when goalkeeper Malaika Dedier made a brave one-on-one save.The home team settled quickly however, and scored from a ninth-minute corner after Ranae Ward blew past her Venezuelan opponent on the left wing to win the set-piece. T&T defender Shenieka Paul scored with an imperious header high into the net.Venezuela lost the plot as T&T found their rhythm, and should have scored again after Laurelle Theodore rounded the Venezeulan keeper, but then fluffed her shot.Venezuela's main threat in the first half came from their set-pieces, but they lacked the height to truly unsettle the T&T defence. They came close 37 minutes in, with a direct free kick which flashed wide of the upright.Their best chance came on the stroke of half time, when Dedier's poor handling allowed Michelle Baldallo to play a dangerous ball into the area. The T&T custodian's defence bailed her out however, as they were ever present to mop up the error.The equaliser however came as a sucker punch; one that the Soca Princesses failed to recover from. Venezuela made good on their threat from free kicks in their first foray forward after the break, equalising with an innocuous header. Hilary Vergara was unmarked in the box when she nodded it in.Alessia Bianchinni forced Dedier to tip over minutes later as she took a swing at goal from 30 yards. Ten minutes later, Bianchinni made good on her dead ball prowess when she beat the T&T keeper at the near post to send the South American visitors into the lead.The rest of the match followed the same script; with Venezuela launching attack after attack on a T&T defence that was losing its concentration. When the ball hit the back of the net for the final time two minutes from the stoppage time, it was yet another free kick that bested Dedier. Bianchinni the perpetrator once more.T&T coach Rajesh Latchoo admitted that his charges have their work cut out for them for the qualifiers."The Venezuelan team were well prepared, they had a tough defence," he said. He added: "The girls over committed themselves, they kept going through the player instead of for the ball." The U-17 Women's World Cup qualifiers will commence in July and the 2016 World Cup Finals will be hosted in Jordan.