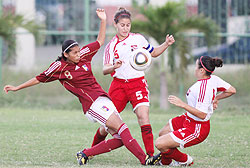 A second half goal by Kayla Taylor pushed Trinidad and Tobago’s National Under 17 women footballers to a 1-0 victory over Venezuela’s U-17s in the second of two friendlies in Puerto La Cruz on Wednesday evening.

The win was T&T’s second in two matches and left captain Lauren Schmidt and her teammates a quietly confident bunch as they returned to Port of Spain on Thursday.

“Another win and another tight game where the better team won,” was how head coach Even Pellerud summed it up as he also relayed the team’s departure for a training camp in Ft. Lauderdale  next week for two possible international warm up matches.

Both T&T and Venezuela played evenly in a scoreless first half but Pellerud pointed out that his team still made some simple mistakes with bad passing and individual tactical and technical errors which he said could cost the team against better opposition. He credited goalkeeper Linfah Jones for a strong showing in goal.

T&T scored when Jo Marie Lewis played a nice pass through to the onrushing Taylor who tapped home from close up for the eventual winner.

“Even though we would have liked to see our team play better, this series was a successful one. For the first time we managed two wins in a row, and that is significant for us,” Pellerud told TTFF Media.

Skipper Schmidt said the two wins was a definite confidence booster for her team just under two weeks away from their opening match against Chile at the FIFA Under 17 Women’s World Cup at the Hasely Crawford Stadium on September 5.

“I thought it was a really good experience as we are nearing the end of our preparation. It showed me that we still need to work on our consistency, to be able to play strong through an entire game.

Yet it also showed that we don't give up easy and we have that drive to win somewhere inside us. We just need to be able to display it for 90 minutes,” Schmidt told TTFF Media.

“It definitely feels amazing to take home two wins. But now we need to focus on what is coming next. We can't let this get us too overconfident.”

Schmidt added that with Pellerud announcing his final 21-player squad last week, the players are able to focus more on overall team readiness.

“With the final team selected, the girls are able to focus on the World Cup a lot better. That’s exactly right. Now all we are thinking about is how to improve our game individually as well as a team in order to be the best we can possibly be by the time September 5th comes around,” Schmidt concluded.