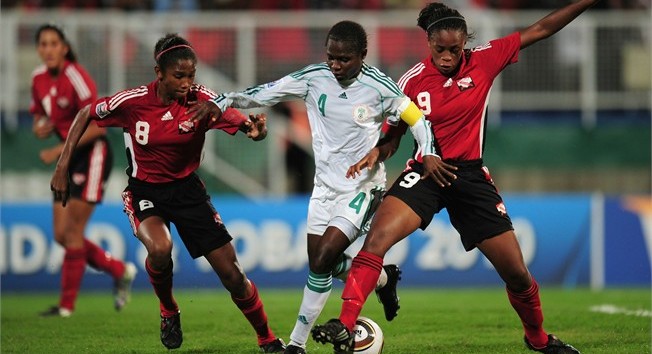 Nigeria won their way into the quarter-finals of the FIFA U-17 Women’s World Cup thanks to a winner four minutes from full-time by Loveth Ayila against Trinidad and Tobago in Marabella.

Buoyed by a rousing home atmosphere and some inspirational goalkeeping from Linfah Jones, the locals appeared set to hang on for a crucial against-the-odds point until Ayila’s late intervention.

Today’s result, combined with a 3-2 opening win against 2008 champions Korea DPR, sees the Africans assure their passage and needing just a point from their final match against Chile to guarantee top spot in the group. The late defeat means T&T must defeat the Koreans in the final group encounter to avoid elimination.

Nigeria started positively and Halimatu Ayinde went close to opening the scoring on five minutes before then setting up Sarah Nnodim soon after only for the latter to miscue her effort.

Nigeria continued in the same vein and Oluchi Ofoegbu then rocked the crossbar with an effort from 25 meters as the Flamingoes inched closer to breaking the deadlock. The finally did so on 28 minutes with a long ball from deep played into the path of Francisca Ordega who coolly lobbed the advancing Jones with a header. Ayinde nearly doubled the advantage but her shot from near the penalty spot was blocked.

Nine minutes before the interval T&T, lifted by the relentless support of the home crowd and the tuneful rhythm section, restored parity via Liana Hinds. The provider of the winner three days earlier against Chile profited from good lead-up work from Jonelle Warrick whose solo run on the right flank, ended with a shot that could only be blocked by Amina Abu into the path of Hinds.

The second half began much the same way as the first with Ordega spurning a good opening for the Africans. T&T reacted with a powerful free-kick from distance only for Diarra Simmons’ effort to nestle the wrong side of the post.

Midway through the second stanza the Soca Princesses had a gilt-edged chance to take a shock lead with Jo Marie Lewis seeing her effort from 12 metres saved with Khadisha Debesette firing the rebound over the crossbar.

Just as T&T started dreaming of collecting a much-needed point came the dagger to the heart of the team and their ebullient supporters in the Manny Ramjohn Stadium. Winifred Eyebhoria crossed from the left flank over the head of Jones allowing Ayila a simple conversion at the back post.

Even Pellerud: I thought we played a very good game today and I’m happy with the efforts of the girls. WE played maybe one of the best games ever but unfortunately it wasn’t enough to get us the victory and we missed out on a point with four minutes remaining.

Overall, I am seeing the team growing from game to game and this was the plan. From our build up matches, you can see the improvements along the way. I am still pleased with the effort put in by all of the girls.

I think for Sunday’s match we will again go all out and give it our best to secure our passage to the quarter finals. We will play like we know to play and hopefully it will be enough to see us through.

I would like to thank all of T&T for the support they have given to us and we will do our best to repay them by getting to the next stage. There has been a lot of sacrifices by everyone in the team and we know how disappointing it must be when we don’t win but we hope that you will keep the faith in us.

Captain Lauren Schmidt: I’m proud of my team even though we are disappointed with the result. We were so close but it didn’t happen for us tonight. It was another great evening for us coming out there and seeing all the fans there to show their support. We will dig very deep for what will be another tough match on Sunday.

Linfah Jones: Honestly we didn’t play at our level today. I think we are a better team. It was a close game and we played really hard but I still think we can do better. Personally I was happy with my game but I know I can do better. My job is to  stop the goals and I will only be satisfied when I can prevent anything from getting through. We are here to try and win all our matches so when we fall short obviously we’re not a happy bunch.

Trinidad and Tobago's "Soca Princesses" matched Nigeria's Flamingoes toe-to-toe for 87 minutes, but fell 2-1 last night in the FIFA Under-17 Women's World Cup encounter at the Manny Ramjohn Stadium in Marabella.

T&T equalised in the 36th through Liana Hinds, after Francisca Ordega headed in Nigeria's opening goal. And with the clock winding down, Loveth Ayila, who had been trying all night to beat the superb Linfah Jones in the Trinidad and Tobago goal, finally found a way in the 87th minute, a heartbreaker to the sea of red that vociferously cheered their every move.

With a sellout crowd urging them on, the Soca Princesses attempted to take the fight to the Flamingoes. Take it they did, with the first attack coming off the head of midfielder Victoria Swift.

T&T had their narrow escapes, like Khadisha Debesette's block of Halimatu Ayinde in the fifth minute and Ayila's total miss of the ball in the sixth.

Jones also rescued the home team with Ordega on the hunt early on, after T&T winger Kayla Taylor failed to get her head to a ball delivered from the right by the other Debesette twin, Khadidra, that would have surely hit net.

In the 20th Nigeria celebrated for a few seconds before Ayila's item was ruled out for a foul on a defender. Ayila again met a brick wall in Jones with her close-range shot, but Ordega would not be denied.

The central striker put the visitors ahead in the 28th minute with a cheeky little play, running on to a lobbed ball at the edge of the area. Jones came out, but was beaten to the ball by Ordega's perfect header that looped over the custodian and into the goal.

And after Jones kept them from going further behind, Trinidad and Tobago found the boost they needed with Hinds's equaliser.

Hinds sprinted from distance with the ball to play a peach of a through-ball to Khadidra on the right and was on hand just inside the area to clean up after the Nigerian goalie, Amina Abu, failed to clear.

T&T survived more Nigerian pressure to go in on an even keel, the score 1-1 at the break.

Again, Trinidad and Tobago started strongly in the second half, but Nigeria looked menacing whenever they moved forward.

Jones was forced to tip Ayila's attempt over in the 50th, while Bahadursingh headed off the near post in danger in the 58th.

In between those plays, Diarra Simmons reminded Abu she was there with a shot from 30 metres that swung only just wide.

Abu nearly handled Khadidra's shot from distance into the net and T&T could have gone ahead if the other Debesette twin Khadisha's header had been just a tad more accurate.

But Jones and solid captain Lauren Schmidt were even more impressive over 90 minutes. Time and again Jones denied Ayila, Ordega and even the dangerous Ngozi Okobi, while Schmidt never let anything past her.

With time winding down and Trinidad and Tobago hoping to steal a point, Ayila found herself in space within the six-metre box and met a left side cross with a lovely little header that sank into the net, and T&T supporters' hearts in the process.

The result leaves Trinidad and Tobago third in the standings behind leaders Nigeria and North Korea, who have a better goal difference of two, with the Africans having already qualified for the next round with two wins.

T&T need to beat the North Koreans in their final match at the Ato Boldon Stadium on Sunday to progress to the quarter-finals.

But they gave the home fans a thrill in what could only be described as "almost".