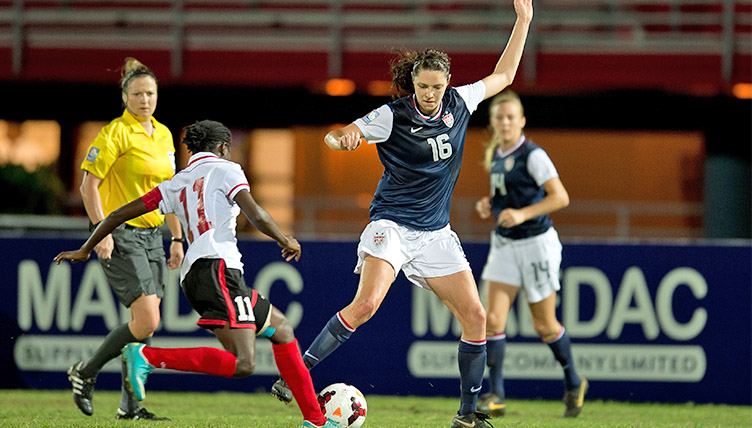 The United States continued its streak of qualifying for every FIFA U-20 Women’s World Cup on Friday, defeating Trinidad & Tobago 6-0 in the semifinals of the 2014 CONCACAF Women’s Championship at the Truman Bodden Sports Complex.

In addition to earning a trip to Canada 2014, the two-time defending tournament champion advanced to Sunday’s final, where it will meet Mexico.

Trinidad & Tobago still has a hope of progressing to the seventh FIFA event, but it must overcome Costa Rica in the match for third place, also on Sunday.

Stephanie Amack continued her strong play with a convincing performance in the middle of the field. The Stanford University freshman scored two goals and was involved in much of the Americans’ effective build-up play. Defensively, she did well to keep the ball in front of her and demonstrated keen positioning when marking.

The U.S. went ahead in the 13th minute with a goal crafted from a combination of precision and composure. Andi Sullivan delivered a left-sided cross to the far post that Katie Naughton intelligently headed across the face of the goal. McKenzie Meehan was there to head home from three-yards out.

Savannah Jordan made it 2-0 in the 27th minute, extending her scoring streak to four straight games. A clever ball from Rachel Hill allowed the University of Florida standout to surge into the box and fire a shot past goalkeeper Keri Myers.

Six minutes later, Amack added to the U.S. advantage. An attempt from Sullivan hit off Myers’ feet and rebounded to Amack, who found the back of the net from 16-yards out.

The Americans put the game out of reach six minutes before the interval. Sullivan struck an impeccable free kick from 40 yards that Amack obligingly nodded in at the right post.

Myers prevented the U.S. from increasing its lead eight minutes into the second half, reacting quickly to block Mallory Weber’s effort from 12-yards out off a deft touch pass from Amack.

Meehan completed her brace in the 65th minute, following another well-worked sequence. Weber sent a cross from the right that found the head of Summer Green, who headed on for Meehan. The Boston College forward completed the play by converting with a header of her own from the edge of the six-yard box. She is now level with Mexico’s Tanya Samarzich with a tournament-best six goals.

The U.S. extended its tournament-record winning streak to 14 games.