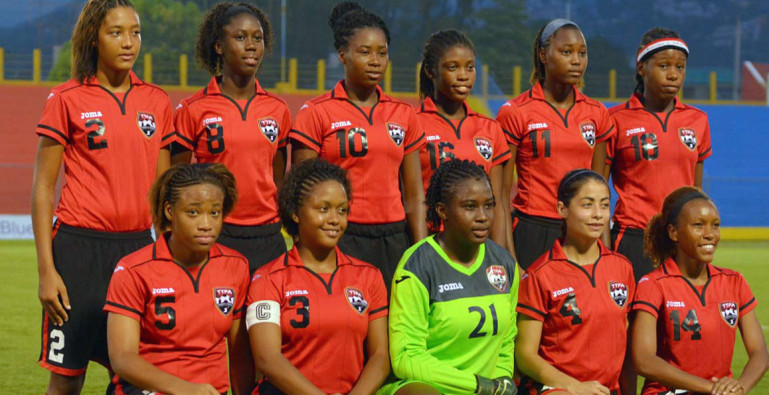 Trinidad & Tobago can’t be blamed for having an extra spring in its step, especially since it will contest the opening match of the 2015 CONCACAF Under-20 Women’s Championship (CU20W) against Canada on Thursday at the Estadio Olimpico Metropolitano.

After earning a berth in the competition thanks to a third-place finish in the Caribbean qualifying tournament – posting an overall record of 2W-2D-1L along the way – T&T is looking to secure a place in its first-ever FIFA U-20 Women’s World Cup. In 2014, it fell five minutes short of realizing that objective, before eventually falling to Costa Rica after extra time, 7-3, in the match for third place.

The past, however, is underneath the scrap heap of memories. The 2015 CU20W offers an opportunity for redemption.

“I have insisted to the players that they need to place all their focus on the next three games, particularly the opening game and they have been responding very well to this,” said head coach Jason Spence. “I certainly believe that this group will be one with some very exciting close games.”

The 44-year-old has good reason to believe that scorelines could potentially be narrow. Two of the last three Caribbean qualifiers ended in draws, including a 2-2 one with Jamaica, which it will meet again in CU20W play on December 7.

Surviving and moving on from those outings has strengthened the squad for the rigors of a CONCACAF event.

“The mood of the team surrounding the football is one of confidence and calm,” Spence commented. “The opening match certainly has a great impact on the rest of the matches as it will set the stage psychologically.”

In CU20W history, T&T has seven wins, nearly double than that of all other Caribbean participants combined (4). With that proven level of success, there’s reason for optimism in Honduras.

How will it be achieved?

Spence answered succinctly: “We are ready to do our best out on the field.”

RELATED NEWSU-20 Women’s team take on Canada in CONCACAF opener.
By Shaun Fuentes (TTFA).Trinidad and Tobago’s Under 20 Women’s team will be seeking early points when they face off with traditional CONCACAF Women giants Canada in the opening game of the CONCACAF Under 20 Women’s Final Qualifying round towards the 2016 FIFA Under 20 Women’s World Cup.The T&T team arrived in full on Wednesday evening in San Pedro Sula and had one training session in the evening under head coach Jason Spence.T&T’s game will kick off at 5pm (7pm TT time) with hosts Honduras facing Jamaica two hours later. Honduras and Jamaica are also in T&T’s group.The T&T team is said to be settled in despite the long travel time and Spence said the players have remained motivated.“The flight was good however tiring as everything was rushed and of course there is a lot that goes with traveling to countries like this with the connecting flights and long hours,”:Spence told TTFA Media.“We were able to get in an hour activation session.”“Honestly the players are excited but tired from travel so the mood was low keyed. We couldn’t do much today due to the time constraints but as always we will focus on getting our rhythm early and settling in early with the aim on getting the job done. We train to win matches so that will be the aim against Canada. I only feed positivity so definitely we are going to put our best out on the park with the aim of getting get the job done,” Spence added.Canadian coach Daniel Worthington unveiled his roster last week for the Championship.Included on their  20-woman squad is defender Sura Yekka, who’s earned 13 caps for the Canadian women’s senior team.Canada won the CONCACAF U-20 tournament in 2004 and 2008, and has participated in six of seven FIFA U-20 Women’s World Cups since the inaugural tournament in 2002. The Reds finished sixth at last year’s World Cup held in Canada.T&T are in Group A with hosts Honduras, Canada and Jamaica.Group B will be headed by the defending CONCACAF Under-20 Women’s Champion United States, and also includes Haiti, Panama and Mexico.Estadio Francisco Morazán will host the opening day matches for Group A, as well as the semifinals, third place match and the final, while the Estadio Olimpico Metropolitano will host the remaining Group A matches and all of Group B group phase matches.The CONCACAF Under-20 Women’s Championship Honduras 2015 will qualify three teams directly to the FIFA Under-20 Women’s World Cup Papua New Guinea 2016.T&T TeamGoalkeepersRebecca Almandoz (MOS), Nicolette Craig (St. Augustine F.C.).DefendersShaunalee Govia (St. Ann Rangers), Renee Mike (MOS), Sawsha Woznuk (St. Thomas Aquainas), Chelsea Frederick, Shenieka Paul.MidfieldersAmaya Ellis (FFC Frankfurt), Kelsey Henry, Summer Arjoon (St. Augustine F.C.), Celeste Thomas (St. Augustine F.C.), Chevonne John (St. Augustine F.C.), Tonya Richards (St. Augustine F.C.), Kedie Johnson, Naomie Guerra (St. Augustine F.C.).ForwardsMaya Matouk (St. Ann Rangers), Raenah Campbell (St. Ann Rangers), Tsaianne Leander (Tobago Chicas), Ranae Ward (Point Fortin Pioneers).