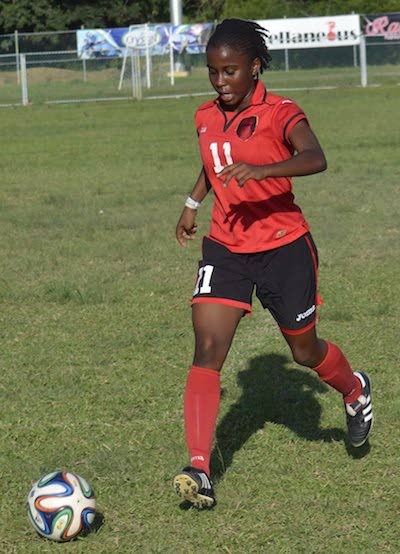 Trinidad and Tobago Women’s under 20 midfielder Renae Ward and her teammates are being pushed to exceed beyond their usual limits as the CONCACAF U-20 Women’s Championship opener with Haiti approaches at the Ato Boldon Stadium on Thursday January 18th.

Ward has described the current training camp under head coach Jamaal Shabazz as intense but designed in a way to ensure the players do not burn out but are instead ready to peak at the right time with three matches against Canada, Costa Rica and Haiti on the schedule.

“Right now the team is in camp and we are training really hard every day. Everyone is trying to improve individually and as a team and the competition is very stiff to get a place on the final team,” Ward told TTFA Media as the team continued with its training sessions at the Hasely Crawford Stadium on Wednesday.

A few overseas-based players have been drafted into the training squad by Shabazz and Ward spoke about the impact their inclusion has had on the overall preparations.

“The foreign players bring competition to the squad because they are here to take our spot. We have to improve and automatically have to play better,” added Ward who guided Bishop Anstey Port of Spain to the 2017 Girls Intercol title, earning “MVP” honours for her efforts.

T&T’s U20-s defeated Jamaica in two warm-up matches in Couva in November T&T’s other Group A opponent Costa Rica, was scheduled to face Jamaica in a friendly at home on Wednesday evening. T&T’s U-20s also had two friendlies against the national senior women’s team which Ward said has helped the team figure out some of its shortcomings.

“The games against Jamaica gave us a benchmark of where we are and where we need to improve. And then in the games against our national senior team, their players were a lot faster than us so it gave us a really good test at that stage of the preparations,” Ward said.

The Trincity Nationals player spoke about the way on which Shabazz has handled the team, adding that getting the team chemistry right is what she and her teammates have been working on.

“Getting the team chemistry right is what we are working on. I think once we get that then we will be a very good team and a difficult one to beat.

“Coach Shabazz is such a good coach. He pushes us to our limits and is really getting us to a point where we can be ready for the competition. The sessions are short and intense but well planned also.

“I am very proud to represent my country in this tournament. It is an indescribable feeling. Playing in this tournament and qualifying for a World Cup will give me a lot of exposure but also help our upcoming national teams because if we can qualify then it will give them the confidence that they can also go onto qualify for future World Cups,” Ward said.

Shabazz is expected to announce his final squad for the tournament next week. T&T takes on Haiti at 7:30pm on Thursday January 18th with fellow Group A opponents Costa Rica and Canada meeting from 5pm at the Ato Boldon Stadium in Couva.