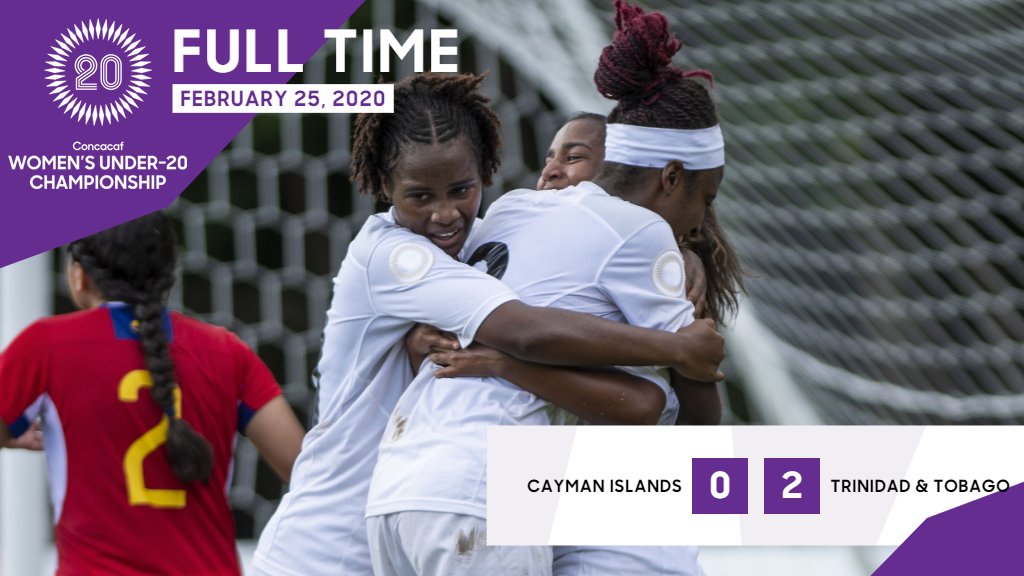 T&T National U20 Women's team was made to work hard by a stubborn Cayman Islands side, but managed to pull off a 2-0 victory over their opponent and a guaranteed spot in the knockout stage with only Haiti standing in their way, if, they are to finish as group winners.

As the CONCACAF U-20 Women’s World Cup qualifiers continues at the Estadio Panamericano in San Cristobal in the Dominican Republic. Trinidad and Tobago couldn't have asked for a better start in this year's tournament but had to dig deep to accomplish that, especially from a team playing with five defenders at times.

Infact, Cayman Islands were the first to attack and almost scored in the first 11 seconds of the game. Thankfully for a fine block by Trinidad and Tobago custodian K’lil Keshwar on their star player Molly Kehoe, T&T survived the scare.

With nothing much to report on in the first half. T&T did managed a few shots on goal including a rocket left-footed shot from Cayla Mc Farlane that crashed off the woodwork. The Cayman Islands goalkeeper Satiah Miller was beaten by Mc Farlane's shot only to be relieved that the goal post (goalkeeper's best friend) showed up and came to her rescue.

Cayman Islands meanwhile, was having a very good game compared to the heavy 8-0 defeat they received from Haiti in their tournament opening game. Today, they came out a different team and looked much more organised, having a Trinidadian-born coach (Stephan De Four) that knew the T&T players very well aided to his team's strategy.

Their defence held strong and they did not make it easy as Soca Princesses had to wait until the 78 minute to break the deadlock.

Maria-Frances Serrant of Diego Martin Central gave T&T the one goal lead and some much needed breathing space. Her well taken goal came when Sarah De Gannes initial shot was not properly cleared and the loose ball fell into the path of Serrant who got to it first and hammered her shot into the roof off the net leaving Satiah Miller with no chance, one up T&T!

The second goal came and with seconds counting down on the clock, T&T's attacker, none other than team captain, Afiyah Cornwall, also got one the scoresheet. The prolific striker just cannot stop scoring at the moment and added another goal to her name on the stroke of full time and into injury time, her 94th minute goal sealed the slender but, hard fought 2-0 victory for the Women Warriors.

Second half substitute Tori Paul, back from injury, was having an amazing game since she came on and provided a pinpoint leftside cross for Cornwall to latch onto, which she probably would have. However, Cayman Islands defender Lauren Scott got to the ball first but couldn't fully connect and her clearance hit the feet of Cornwall and was guided into the net.

But I'm sure Cornwall wouldn't mind which ever way she gets the goal, once her name is on the scoresheet is all that matters and required, from a striker, job done.

Since arriving in the Dominican Republic, Cornwall has bagged 9 goals to date, including a hat-trick against Puerto Rico in a friendly match and her 4-goal haul versus St Kitts & Nevis in the tournament opener. So far, Cornwall has scored 2 hat-tricks before the half-time whistle was blown and nine times from her last four appearances.

Speak­ing af­ter the match, coach Richard Hood said he was pleased with the team’s over­all per­for­mance, not­ing that they had achieved their first ob­jec­tive of qual­i­fy­ing for the next phase. How­ev­er, he ad­mit­ted he was not hap­py with how many goals the team threw away and some as­pects of their de­fence and at­tack.

“Over­all, I’m pleased with the ef­fort from the girls to­day. I thought they worked hard in some re­al­ly dif­fi­cult con­di­tions and I’m hap­py mov­ing in­to the sec­ond round, so we’ll do our re­cov­ery work and see what to­mor­row brings in train­ing and pre­pare for the game against Haiti.”

Up next for T&T is a date against group favorites, Haiti, this Thursday (February 27th), game starts at 3:00pm.

T&T will have to keep close eyes on captain Melchie Daëlle Dumornay who, took over where their last U20 star player Nerilia Mondesir left off. Only 16, Dumornay has already played and scored for all four Haitian Women teams including the; U-17, U20, U-23, and their senior women's team. Dumornay also became the youngest player at 14, to play in a FIFA World Cup (2018) at the under-20 level.

Dumornay had a Golden Ball performance at the 2018 Concacaf Women’s Under-17 Championship, scoring five goals as Haiti finished in fourth place. While Mondesir made history at the Under-20 World Cup in 2018 when she became Haiti’s first goal-scorer at a Women’s World Cup.

The last time both teams met at this level was in 2018 in which Haiti came out victorious. The talented Nerilia Mondesir tormented T&T defence the entire game and got a hat-trick for diligence, that helped Haiti come-from-behind to defeat the home team 3-2 at the Ato Boldon Stadium. The Jamaal Shabazz coached team blew a two goal lead to a well organised Haitian. Current players; Klil Keshwar, Megan Ram­per­sad and Aaliyah Prince were all part of the Haitian defeat.

Meanwhile, as previously mentioned, former T&T Women’s U17 and U20 head and assistant coach Stephan De Four is currently the head coach of the Cayman Islands Women teams and also is in-charge their Women’s Football program. De Four was in charge of the Soca Princesses up until December 2019 before being relieved off his duties for Police FC head coach, Richard Hood.

Ironically, the Trinidadian-born coach has coached all three teams in T&T's group as he was also in charged of the Haitian Football Association Women’s Program, where he served as head coach of the senior women's and youth teams respectively.

This competition began in 2002 as the CONCACAF U-19 Women’s Championship, serving as a qualifier for the first-ever U-19 Women’s World Cup. The inaugural tournament was played in Trinidad and Tobago as the USA and Mexico won their groups and advanced to the World Cup in Canada.

North American squads have dominated the biennial tournament - the USA, Canada or Mexico have finished as finalists at all nine previous editions. In 2018, Haiti became just the second non-North American team to qualify for the U-20 World Cup with its third-place finish. Costa Rica is the only other Central American or Caribbean nation to qualify, finishing third in 2004, 2010 and 2014.