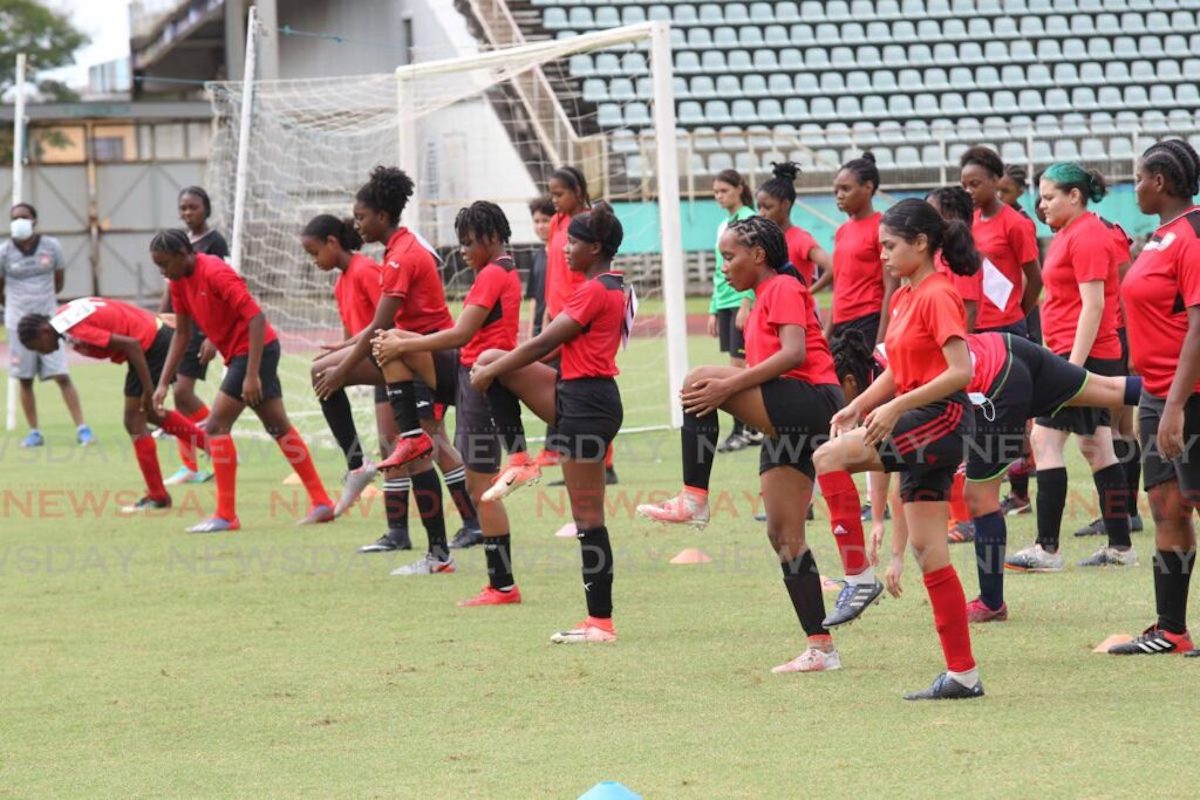 NEWLY-APPOINTED national women’s Under-17 and Under-20 coach Jason Spence held the first of four open tryout sessions for both age groups at Mannie Ramjohn Stadium in Marabella on Wednesday.

Spence, who was announced head coach of both teams by the T&T Football Association (TTFA) on Sunday, hosted a morning session with the younger bunch and an evening trial with the older players.

Several players showed up in each division on the opening day. TTFA technical director Dion La Foucade said the number of players will increase as the try-outs continue as persistent rainfall on Wednesday forced some players to stay away.

Initially, the two-hour try-outs were scheduled for Ato Boldon Stadium in Couva but a soggy outfield forced a venue change.

“The first session went well. The numbers were a bit small because we switched venues but coach Spence put the girls through some physical and fitness work, technical work and tactical work,” said La Foucade. The second trial continues on Thursday with the final two assessments scheduled for December 29 and 30.

Additionally, a similar try-out was held at Dwight Yorke Stadium in Tobago on Wednesday and runs concurrently with the Trinidad series. The TTFA opted to have these talent-search segments to help bolster the Under-20 team which will compete at the Concacaf Women’s Under-20 Championship in the Dominican Republic from February 25 to March 12.

Similarly, the women’s Under-17 team travel to the Dominican Republic for the Under-17 version of the Concacaf tourney which takes place from April 23-May 8.

La Foucade added, “Coach Spence is giving the players four days of trials. At the end of four days, he will decide who his squad will be. It’s a revolving door so it’s continually open to players who pop up here and there as it goes along.

“We in the technical department have to take part in these Concacaf tournaments whether it be Under-15, Under-17 and Under-20 which is all part of the players’ development to make the senior team. It’s all part of their development.”

La Foucade said national senior women’s team coach Kenwyne Jones is expected to make a surprise visit at the trials to see what possible talents are being scouted to help move the younger teams forward.

Both the Under-17 and Under-20 women’s teams have been inactive for the past 20 months owing to the pandemic. La Foucade believes these sessions serve as a good platform to help unearth new players and bring a fresh start for the national youth teams.

“It’s going to take a while to bounce back from all those months of downtime. They will some time to get back into the groove of things. But it’s very important. We would have lost some time due to the pandemic.

“We’re encouraged by the number of players that came out. The word is starting to spread and players are interested. It’s a great thing to play for your country,” he said.

Players from as far as Diego Martin, Arima and Sangre Grande turned up for the trials. La Foucade was pleased with the feedback received from players and confirmed that numbers will soon increase as the word spreads throughout TT.