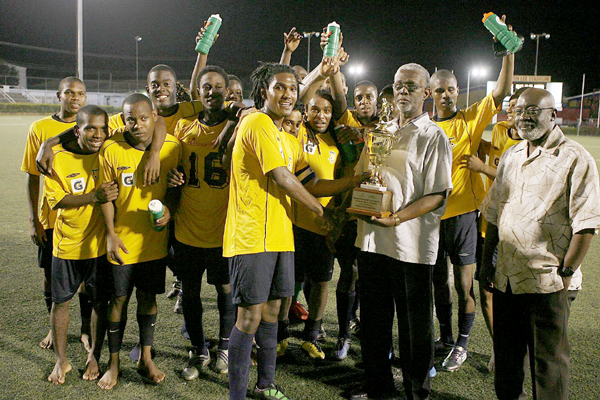 Promoted 1st FC Santa Rosa claimed the first title at stake in this season’s Emerald Apartments & Plaza-sponsored Eastern Football Association competition on Sunday. This after Santa Rosa edged M&M Real Maracas 2-1 in the final of Vernon Bain Challenge Trophy at the Marvin Lee Stadium, Macoya. Santa Rosa had substitute Christopher Young to thank for lifting the trophy when he latched onto a defence-splitting pass from national Under-17 captain Duane Muckett to score the winner.

The Big Cannons as Santa Rosa are called, had taken a 35th minute lead via captain Jovan Rochford when he headed in Hayden De Verteuil corner but two minutes before the half Sherron Manswell drew Real Maracas level only for Young to get the decider in the second-half. In the semfinals, Jean-Paul Aqui headed in the lone goal for Santa Rosa against Maloney FC in the 19th minute from a left sided freekick by off-season signing Hayden De Verteuil.