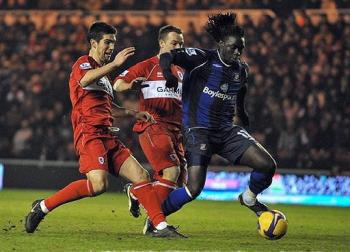 Stoke City record signing, Kenwyne Jones, is a player in need of form. He enjoyed a promising start to life in the Barclays Premier League when then Sunderland manager, Roy Keane, took him to the Stadium of Light.

He caught the eye with some great performances up front, even earning himself the honor of being linked with big money moves to the League’s elite clubs including Liverpool, Chelsea and Tottenham.

However nowadays, Jones has simmered down. For me, his move to Stoke City was a step down rather than up and if he is to salvage himself and eventually earn a move to a bigger club, even one that plays in Europe, then it’s vital that he improves.

Let’s look at Jones’ playing style first of all. After watching Jones for a while and based on what I’ve seen of him at national level, I’ve arrived at the conclusion that Jones is a target man in the Heskey mould, but just a bit better.

He is great at taking down long balls, he can flick them on quite well as well and he uses his body and immense strength very well. He is superb in the air and is good at holding up the ball.

Having said that, I’ve compared his style to that of Heskey’s because he’d rather lay the ball off for his team-mates most times than go for goal himself.

As we all know, Emile Heskey is a target man renowned not for his goal-scoring exploits or lack thereof, but for his ability to bring others into the game. In my opinion, this is Jones’ strong-suit. On the flip-side, Jones has some unfortunate drawbacks that for a striker, has made his job up front a lot tougher.

He lacks the pace necessary to get in behind defenders and he sorely lacks technical ability. His footwork is rather one-dimensional and his lack of dribbling technique sees him get caught in possession more often than not.

With that in mind, how can Tony Pulis work around those short-comings? Well, I recommend that Jones never be played as a lone striker.

A lone striker, if he is to be effective, needs to have good pace, brute strength and good technical ability. Jones only has one of those qualities- strength. Thus, he is not at all suited for that role.

I can prove this statement. Kenwyne Jones plays as a lone striker for his country, Trinidad and Tobago and I can tell you that having watched most if not all of those games, Kenwyne Jones looks isolated, lost and is overwhelmingly ineffective.

Jones needs a partner if he is to serve a meaningful purpose on the pitch. His playing style is one that complements either a van Nistelrooy-type poacher or a Tevez-style center forward.

Paired with either kind of striker, Jones would blossom. He would hold up the ball or flick it on for his onrushing strike-partner who would then finish the play.

Jones would be subsequently on hand to feed off scraps and tap in rebounds. There were glimpses of this last season at Sunderland when he was partnered with Darren Bent.

Jones was involved in a few of Bent’s goals- whether he crossed the ball into the box or he knocked the ball down for Bent to run onto it. Either way, I’m adamant that this role would suit Jones best.

Another way to get the best out of Jones is to have the wingers send pin-point crosses into the penalty area or to have pin-point set-piece deliveries sent into the box.

I mentioned earlier that Jones is phenomenal in the air and great deliveries would see him power sublime headers past helpless ‘keepers.

I also recommend that Jones be positioned in or around the penalty area as his lack of pace and technical ability would see him lose the ball quite often if he has to do too much running.

At Stoke, his ideal strike-partner is Tuncay in my opinion, as he is a bit pacey and works hard up front.

He’d do all the running- whether from midfield or around the penalty area and Jones would play the ball to him en route to goal. I’m sure that partnership will work if given a chance. I do think though that a higher quality striker is needed to partner Jones, but for now, Tuncay would do.

All in all, I see Kenwyne Jones as talented enough to get himself out of this slump. Steve Bruce got fed up of his inconsistency in front of goal, but I’m adamant that Jones is not an out and out goal-scorer, but is instead the perfect foil for one.

Indeed, Tony Pulis has a potent weapon on his hands, as does his country, Trinidad and Tobago. Hopefully, we can see Jones at his very best at Stoke City and given time, who knows? Maybe a bigger club will come calling.

Also, from a national perspective, surely, Jones would make his country proud.