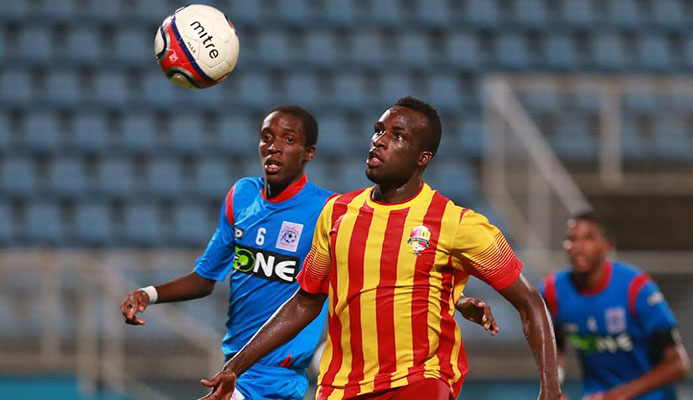 The table-propping Civic had looked set for their first win of the 2016/17 Digicel Pro League term under new coach Dick Furlonge after a quick-fire double by striker Jamille Boatswain in the second game of a double-header at the Ato Boldon Stadium on Tuesday night.

But the Lawmen pulled the scores level through substitutes Joshua Leach and Kaaron Foster.

However, despite dominating the second half and twice rattling the Civic crossbar in the late moments, Police failed to find the winner.

The result saw Police (5 points) slip one spot into fourth after three games, while Ma Pau Stars (6 points) moved four spots up into third and tied on points with second positioned San Juan Jabloteh after a comfortable 3-0 win over 10-man St. Ann’s Rangers in the earlier game at the Couva venue.

Two-time defending DPL champions, Central FC (9 points), leads the standings, and, like W Connection must compete in their final Concacaf Champions League fixture this week before refocussing on their domestic ambitions.

Anthony Wolfe, Jason Scotland and substitute Kerry Baptiste all found the back of the net for the Ma Pau Stars, with Carlos Edwards playing a pivotal role in each item.

Wolfe acrobatically fired Ma Pau (1-0) ahead with an overhead kick on 16 minutes after controlling off his chest a floated Edwards’ free-kick ahead of former Stars goalie, Cleon John.

Scotland, who, like Edwards, recently returned to the Pro League after spending more than a decade abroad, made it 2-0 on the half hour mark. Scotland folded back the years when turned defender Devon Drayton before letting off a left-footed strike beyond John and into the far netting following a throw-in by Edwards.

Changiah later became the focus of attention with two minutes left when he allowed play to continue after Stars’ substitute Jerrel Britto, who had two scoring opportunities in the second half, was brought down in the box by Kareem Baptiste.

Ma Pau’s protest was brief, possibly because the Ross Russell coached-side were already 3-0 in front at the time.

Baptiste (K) had completed a simple tap-in at the goalmouth in the 75th minute following a right side move by Edwards to round defender Kareem Baptiste before squaring a pass across the six-yard area to find his teammate.

Marvin Lee had the best scoring chance for Rangers—back with Anthony Streete as coach—which arrived in stoppage-time but the substitute forward skied overbar from inside the area in the last kick of the match.

In the second match, Police coach Hood saw his troubles heap up in doubles after both starting forwards Keion Wilson (hamstring) and Kareem Freitas (ankle) failed to continue beyond 25 minutes. And with Jameel Perry possibly out through injury and last season’s DPL topscorer Makesi Lewis out for the season with a broken leg, it was down to experimenting in attack.

Then came Boatswain’s double within a space of two minutes.

Boatswain, starting upfront in absence of injured Nigerian forward Ahinde Adeshigbin (ankle), handed Civic the shock lead (1-0) on 24 minutes after beating a host of Police players including goalkeeper Adrian Foncette just outside the top of the box to meet a long pass forward by Shaquille Stewart before hitting low into vacant net.

The powerful Boatswain then made it 2-0 a minute later when he capitalised on a blunder by the Police defence to complete his double by poking a Kestwin Goolie cross past goalkeeper Foncette.

Goodman preserved Civic’s two-goal cushion just before the half hour mark with a penalty save to deny Todd Ryan, who he had also blanked after 15 minutes.

The Civic ‘keeper had the travelling pack of Point Fortin supporters cheering again when he rushed off his line to blank Christon Thomas.

But even on his best night, Goodman was unable to stop a left-footed screamer by substitute Leach which fitted like a hand to a glove in the top left corner from 28 yards out as Police reduced the deficit 1-2 two minutes before the break—moments after defender Ryan O’Neil only won himself a yellow card for a “hand of God goal” from a corner play.

Foster later pulled Police level (2-2) on the hour mark when he headed in at the goalmouth after Goodman had produced a double-save by keeping out a powerfully struck Ryan free-kick then the initial follow-up by Leach.

The Lawmen continued to pile on the pressure with second half substitute Micah Lewis, who was also denied brilliantly by Goodman, causing havoc in Civic’s half. But a winner couldn’t be produced by either side.

Boatswain, who was inches wide of his side item early into the second half, failed to put Civic back in front ten minutes from time by hitting wide with goalkeeper Foncette at his mercy.

Then on the other end, Leach and Ryan rocked Goodman’s crossbar five minutes apart, before Kenaz Williams with the best chance of snatching the win on the latter’s rebound, skied his attempt overbar.

Police are back at the Ato Boldon Stadium on Friday against Rangers from 8pm, following a 6pm kick-off between Club Sando and Defence Force.

Ma Pau Stars meanwhile, will be at the Barataria Recreation Ground on Sunday from 5pm against hosts San Juan Jabloteh.