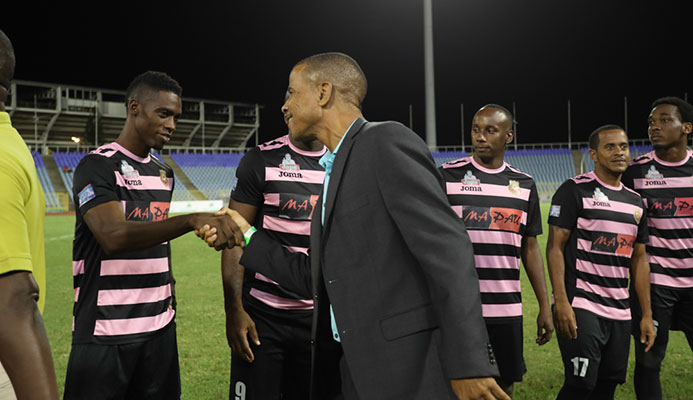 North East Stars pulled six points clear at the top of the Pro League 2017 standings on Friday night after edging second-positioned W Connection 1-0 to set the stage for new champions this season with three-time holders Central FC seventh and just 13 points from 12 of their 18 league games.

Elton John’s fine chip from the edge of the box to beat an advancing W Connection goalkeeper Julani Archibald after just three minutes eventually snapped the visitors ten-game undefeated run in all competitions and earned the hosts maximum points at the Arima Velodrome to maintain Derek King side's one-hundred percent unbeaten record -- with six wins and one draw -- at the iconic venue.

North East Stars (33 points), chasing a second league crown since winning the title in 2004 under Guyana-born coach James Mc Lean, are against Club Sando, Police FC and San Juan Jabloteh in their last three league games but not before hosting MIC-IT St. Ann’s Rangers from 4pm in Tuesday’s league fixture at the Arima Velodrome in search of three more points.

Meanwhile Connection (27 points), who have rivals Central, Defence Force and Morvant Caledonia United in their last three league fixtures, must first turn their focus to Tuesday’s league visit to Barataria Oval against San Juan Jabloteh from 5pm then on to the semi-final round of the First Citizens Cup on Nov. 3 against Club Sando.

Sando (22 points), third on the Pro League standings, will host Jabloteh from 3:30pm at Mannie Ramjohn Stadium on Sunday with the hopes of improving their mathematical chance of earning a CONCACAF Champions League qualifying spot which goes to the top two PL finishers.

Connection had themselves to blame against North East, a side they allowed to claw back a late 2-2 draw on Jul. 14 in Round One, after team captain and veteran midfielder Hughtun Hector -- in his first game back from injury -- spilled overbar in Arima with the goal at his mercy just over the hour mark following a defensive error by the hosts.

Moments later Hector tried to redeem himself with a neat free-kick delivery but substitute Weslie John headed wide of the target after meeting the cross near the back post. Then, three minutes from the end of regular time, a headed attempt from midfield hard-man Briel Thomas cannoned off the bar as Stuart Charles-Fevrier’s side failed to draw level before the final blow of referee Gordon Maloney’s whistle.

Stars, who survived a couple scares near the break, also had their moments of missed chances with defender Julius James heading overbar five minutes from the half off a corner swung in by Kerry Baptiste, who later failed to capitalise from the edge of the six-yard when he was picked out in the area by an improvised pass from second-half substitute Kordell Samuel.

Archibald was forced into a save from Keston George just before the hour mark and a couple minutes later, Densill Theobald should have had, at least, forced the Connection goalie into another save, but fired inches wide of the top corner from the top of the box.

The Stars, though, would hold on for a fifth consecutive league win thanks to their captain Elton John’s third league goal and fourth in all competitions this season, but first in open play with his previous three scored from the penalty spot.

On the opposite end of the spectrum, Point Fortin Civic moved two spots off the bottom, leapfrogging Rangers and Police to go eight after holding off the latter for a 2-1 win at the Barataria Oval in the only other fixture contested on Friday.

Shackiel Henry opened the scoring for his first league goal of the season since returning to Civic from Connection in mid-season and Shaquille Dublin, for his second goal in as many matches, made it two-nil early in the second half before Kareem Perry pulled a goal back for Police on the hour mark.

Police, though having the majority of chances including a Todd Ryan penalty effort which hit the bar midway through the second half, surrendered to a third loss of their last four league outings, while Civic snapped a four-game losing run in the league before hosting Defence Force from 6pm on Tuesday at Mahaica Oval in a dress rehearsal of the of their First Citizens Cup semi-finals clash against the holders on Nov. 3.

Teams at the Arima Velodrome on Friday