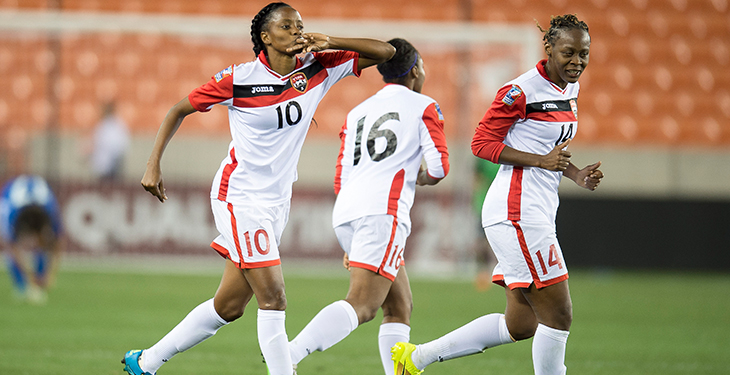 Tasha St Louis will lead the Trinidad and Tobago’s Senior Women’s Team as captain when they face Venezuela in the first of two international warm ups at the Ato Boldon Stadium from 4pm on Sunday.

Head Coach Carolina Morace appointed the veteran player to lead the team with defenders Arin King and Karyn Forbes given the role of vice captains.

Morace has been preparing her squad during a residential training camp over the past few days in the build up to the two matches against the South Americans.

“This is my first game in charge of Trinidad and Tobago and of course I am excited just like the rest of my staff. This game will be used to measure where we are as a team. We know that we have worked a a lot physically and now we want to see where are at,” Morace told TTFA Media on Saturday.

“In this camp we have had a chance to bring the local players and US-based players together and set up the professional environment that is required to play in the national team. The last two or three days, the players have focused more on the technical and tactical aspect. I have to say that the atmosphere is great.”

As to what she will be looking for from Sunday’s encounter, Morace  said, “In ball possession, I will focus on the distance of the players in the same unit and the distance in the different units and the timing to take space. What I want to see in non ball possession is whether the player understands the concept of marking and covering.”

St Louis also spoke about the current mood in the camp, describing it as high level.

“The atmosphere now is pretty good. The players are gelling and we are starting to look like a team.” she said. “Both games against Venezuela will be good for us and I am looking forward to having a great impact as an individual and as a captain.

Forbes said she was pleased to be part of the current training camp outside of the normal preparations for a tournament.

“Right now we are involved in a two week camp in preparations for the future and it’s great that we are starting this early because usually in the past we didn’t have this full preparation camp, doing things that will help us achieve our common goal which is making it to France 2019. I am really excited that we have the privilege to come in and do these team building exercises that we have been doing in camp because this is all part of the preparations for moving forward and achieving success,” Forbes said.

King said the team was keen to show their commitment to the program with a solid showing in these two games.

“It feels great to be back with all my sisters. It’s a good atmosphere coming back in, training again and being around everyone, getting that chemistry going again. We’d love to have the support of the fans come out. We are excited to show you where we are with our passion and drive to make it to France,” King said.

Tickets are priced at $100 (adults) and $50 (children) and are available at the game venue on Sunday. Season Pass Holders will gain free access to the match.